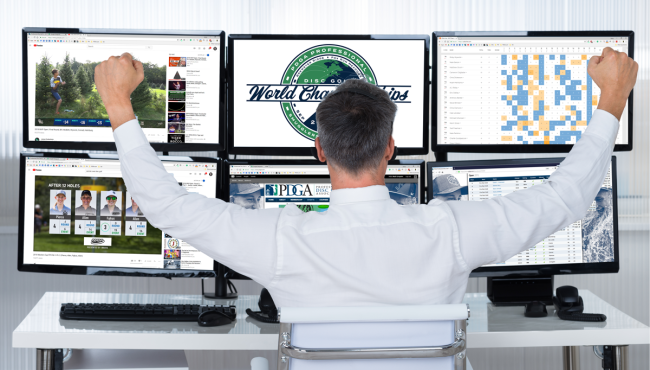 After winter brought breakout wins and spring produced winning streaks, summer saw a collection of historic feats and firsts. With the early nip of fall now in the air, the 2018 professional disc golf season has finally built toward its zenith: the PDGA Professional Disc Golf World Championships.

Five rounds of singles play are in store from Wednesday, September 5 through Sunday, September 9 at Smugglers’ Notch Resort in Jeffersonville, Vermont, as the world’s best descend upon the Green Mountains to try and etch their names in the history books. With a full slate of real-time scoring and statistics, post-produced video, live-streaming coverage, and social media highlights, fans who can't make it to the Northeast will have plenty of options to follow along with the action until new world champions are crowned.

No matter the round or the card, UDisc Live has you covered. Keep track of the top contenders, big moves on the leaderboard, and all the stats you can handle every day from the time the first card tees off until the last putt goes down with the sun.

PDGA Media will be on the ground all week bringing the sights and sounds from the event. Whether it's behind the scenes shenanigans on Instagram stories or photos and interviews on Facebook and Twitter, we'll be communicating across all of our platforms for the week. Plus, be sure to subscribe to our newly refreshed YouTube channel, where we'll post daily soundbites and other highlights from the tournament.

The road warriors at Jomez Productions recently passed the 80,000 subscriber mark, and they'll be pulling double duty with an expanded crew at Pro Worlds. First, they'll tackle the Open Women's lead card each morning, then they'll head back out for the Open lead after lunch. Add to their hustle some fan favorites on commentary, and it's a recipe that should keep viewers satisfied throughout the week.

You never know when someone will fire off the hot round from the second card, or where a Philo-batross might happen. With that in mind, we are happy to have Central Coast Disc Golf on MPO chase card coverage all week. Plus, with the dulcet tones of Ian Anderson and Cory Murrell on the call, there are bound to be catchphrases aplenty.

Missed the live coverage, or just need a quick rundown of the day's action? We'll have you covered through the PDGA's YouTube and social media channels with daily round recap videos that will mix quick-cut highlights with player interviews and stats breakdowns. We'll do our best to fit everything you need to know into an easy-to-digest, easy-to-share package, all thanks to cooperation from our post-produced video teams and ace editor Murrell.

Full live coverage of the Open Women's division? You've got it. SmashboxxTV will have live, two-camera coverage of the FPO lead card starting with their Friday morning tilt at Fox Run Meadows. Stick around for Saturday's coverage down to the cut line, and watch live on Sunday morning as the Open Women's World Champion celebrates her title. Terry Miller welcomes Hannah McBeth into the booth, while PDGA Media's Steve Hill will check in with reports from the sidelines.

After Miller has a chance to catch his breath, he'll be back on the call for the Open lead card Friday through Sunday afternoon. Robert McCall adds both disc golf expertise and excellent hair to the booth team, while Hill will be back on the ground to report on any intriguing developments before a new Open World Champion is anointed.

Your Instagram feed is going to be happy this week, as four of disc golf's best photographers will be on site to chronicle the action.

The team from Ultiworld Disc Golf will be out at Smuggs every day delivering news, analysis, and episodes of their podcast, The Upshot.

Be sure to clear your schedule and get your bookmarks in check. We'll see you next week in Vermont.

Thank you for all the coverage this year.

I'm a big fan of the scoring with UDiscLive, and the streaming with SmashboxxTV, which I will watch. I really appreciate the full coverage of FPO as well.

The "Overstable Studios" Instagram link isn't working. The link should be: https://www.instagram.com/overstable