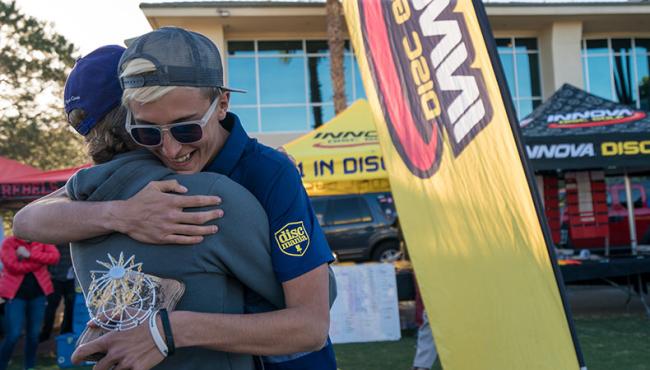 HENDERSON, Nev. – Eagle McMahon had just been crowned champion of the Las Vegas Challenge, but you wouldn’t have known it. Sure, there was an adoring crowd, and Eric Oakley came up from behind with a bear hug that lifted him off the ground, but McMahon quickly came back to earth – literally. Instead of celebrating with fist pumps, high fives, or screams of joy, he simply laid on the ground, then sat back up and curled his lanky arms around his knees, almost in disbelief that the moment had finally arrived.

Minutes later, after tallying scores, signing countless autographs, and posing for the obligatory sponsor photos, McMahon stood behind the 18th basket of Wildhorse Golf Club’s Innova course and looked down toward one of the venue’s numerous water hazards. Then, he shifted his gaze toward the sea of heartaches that preceded Sunday’s triumph.

“There’s been so many times, like USDGC, Aussie Open, Beaver State Fling,” the 19-year-old said. “There’s so many, and they’re all forgotten about now. It’s really good. I’m so happy about it.”

Indeed, McMahon never let this win escape his grasp, instead dishing out a commanding 10-under par 51 performance that brought his four-day total to a 36-under par 206. His drives were precise, his putting was sound, and, most importantly, his mental game finally reached the same pinnacle as his raw physical talents. One week after he was on the cusp of a high caliber victory at the Wintertime Open, he was more than happy to trade that breakdown for this signature achievement.

“A lot of people out there were expecting me to choke because I’ve had past records of it,” McMahon admitted. “And like last week I was – that was a really close tournament, and the fact that I was so close then and came to this tournament and shredded? That’s, like, the most incredible feeling.”

McMahon held off a relentless Joel Freeman, the 23-year-old Colorado pro who tossed a 7-under par 54 Sunday to finish in second place with a 32-under par total. Ricky Wysocki matched the day’s hot round with an 11-under par final that moved him into a third-place tie with Nikko Locastro at 30-under, while Drew Gibson and Simon Lizotte rounded out the top 5 with their 29-under par 213s.

It was Freeman’s highest career finish on the PDGA National Tour, one that found him staying on the lead card every day after the opener. His Sunday showing featured forehand accuracy – he pinned his drive on the 222-foot 6th and had an approach shot crash chains before splashing out on 15 – and the strong putting that contributed to his 94 percent clip over 72 holes.

While Freeman may have surprised fans with his play, he didn’t surprise himself. A former ultimate player, he easily converted to disc golf and before long was throwing 350 feet. (He’s now added more than 100 feet to that, as evidenced by the flex drive he launched en route to a birdie on the 756-foot 16th.) The first rated round of his career clocked in at 1024, and he’s been on a speedy upward trajectory since.

“From day one I’m like, ‘I can hang with these guys,’” Freeman said. “It’s just gonna take time. It takes that experience so I know the mentality to walk into a tournament with. Even if I had the skills I have today a year ago, I might not have had the mental game. Little by little it’s just coming together. Little by little.”

McMahon has experienced that same ascendance since a lead card showing at the 2015 Glass Blown Open thrust him into the spotlight. As he’s grown into a public figure and national presence, he’s had his dad, Pat, by his side the whole way. The elder McMahon was here this weekend, offering his son a sounding board and calming presence when needed.

“Relieved, relieved,” Pat McMahon said. “Totally excited, but totally relieved that he finally just went out there and played his game. I knew he had it in him and it was just a matter of time. The way he did it this weekend was impressive. I’m proud of him because he put a lot of time in this offseason to prepare for this year, and it’s really paid off. He backed off a lot, and he’s got good plans and a good, steady head on his shoulders for a young guy like that. For a dad, you can’t be any more proud.”

The McMahons started playing disc golf when Eagle was nine years old. Within a week of their picking up the sport Eagle’s mother, whom Pat had divorced, passed away. Disc golf then became an unbreakable bond for father and son as they grieved.

“I would not even have been in this position without him,” Eagle McMahon said. “No one in my life has ever supported me as much as he does and still does. He’s literally my best friend, and I couldn’t ask for anything more. To have him touring with me, it makes it that much easier.”

Pat McMahon couldn’t recall if Eagle’s mother knew the pair had started disc golfing – he may have mentioned it offhand, he said – but he knew how she would feel if she were there to see the man her son has grown into.

“She’s smiling right now,” Pat McMahon said. “Now I’m getting emotional. She’s proud. His grandma’s really proud, too. His grandma picked up the slack for a lot of us. It feels good.”

Eagle McMahon also credited Andreas Gertsch, who he trained with in Switzerland this offseason, and a pep talk from Catrina Allen for helping him gear up for the mental tests he encountered during the final. But it was Pat McMahon who provided him with the encouragement that left the strongest impression.

“He said this last night: ‘Tomorrow is the start of the future,’” Eagle McMahon said. “’You’re gonna erase all those past ideas of yourself, and you can begin your career to be the best player you can be.’”

Now with the proverbial monkey off his back, Eagle McMahon paused briefly to let his father’s wisdom set in, taking a quick breath from the intense, excited tone of a teenager knowing full well he has greater achievements in mind and larger goals to attain. Then, with the confidence of a champion, he continued.

Congrats Eagle keep it up all of Colorado is cheering for you.

What an amazingly written article. I have been lucky enough to have known and played rounds with eagle and his amazing father Pat in Colorado. They are very competitive and both amazing players. I remember after a tournament one time telling Pat that eagle will be the best player one day and this was when eagle was only 14. I knew his talent and saw his love of the game and just had this feeling I would be seeing him at the top in no time. And now it has come. A dream come true for him and I am so happy for eagle and pat alike. Rock on eagle I am sure happy and proud of you that you followed your dreams!

Congratulations Eagle, we are all cheering for you!