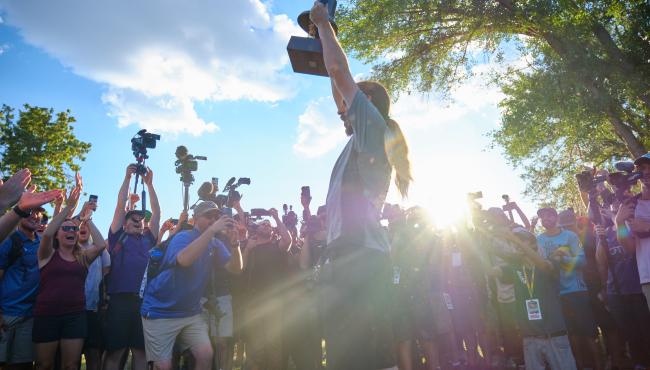 Everyone knew this Worlds would be special, but nobody knew just how special it would turn out to be.

Just hours after Catrina Allen snatched victory from the jaws of defeat with a gutsy approach shot that landed safe on the OB line that surrounds The Fort’s daunting 18th green, James Conrad stepped up to a similar shot on that very same hole.

Paul McBeth, who held a one stroke advantage heading into the 18th, was executing his plan to perfection—playing for par and all but assuring himself the victory.

In a PDGA Professional Disc Golf World Championships that had already been so improbable, the impossible happened.

Conrad lined up a 247-foot baby anhyzer with his MVP Envy, knowing full well that nothing less than a direct hit on the basket would keep his World Championship hopes alive.

The Utah crew, led by Tournament Director Jade Sewell and Assistant TD Rob Bullen, had spent years designing the sport’s most dramatic finishing hole. Its narrow, roped fairway leads up to the 10-meter circle which surrounds the basket, defining the out of bounds on the back side of the green and lined with bleachers meant to hold—what they hoped would be—a capacity crowd on the edge of their seats.

In all their wildest dreams, however, they never imagined a scene like this.

The capacity crowd, desperate for more action, put all their energy and attention into this final bid from Conrad.

The shot hung in the air for what seemed like an eternity and, as it drew nearer and nearer to the chains, the excitement grew, with shouts of “Go in!” ringing out from the gallery, until… 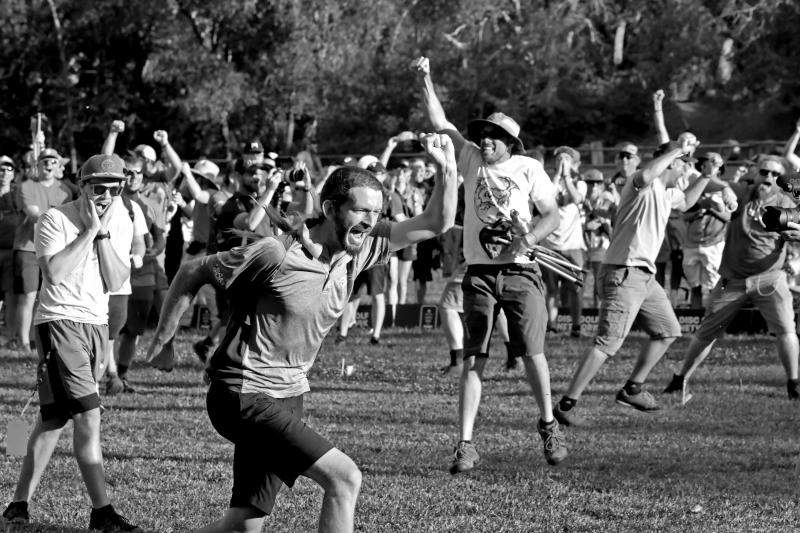 All of the anticipation, all of the energy, simply exploded with the sound of Conrad’s disc hitting those chains.

“I feel like you all willed that shot into the basket,” he would go on to say.

But, of course, it wasn’t over. The five-time champion, McBeth, who had continually raised his level throughout the final 18 holes of this tournament, as only the greatest champions can do, was still alive.

Conrad would need to collect himself after throwing what—should he go on to claim victory—would certainly be remembered as the greatest disc golf shot that had ever been thrown.

The sudden-death playoff would begin—and end—on the 16th hole; perhaps even more iconic that then 18th, with its dramatic downhill play into an island green.

It could not have been a more perfect setting for Conrad, who had already sent shock waves through the disc golf world when he aced it during round 2, and almost followed it up with another ace as he hit the basket during round 4.

After a 10-minute break during which the gallery jostled for position and the event organizers scrambled to convert their championship presentation into a mobile unit, the stage was set.

Conrad let loose a high, stalling hyzer shot with his MVP Entropy—the same shot that had yielded so much success on his three previous attempts—and, once again, his disc settled within arm’s reach of the basket. 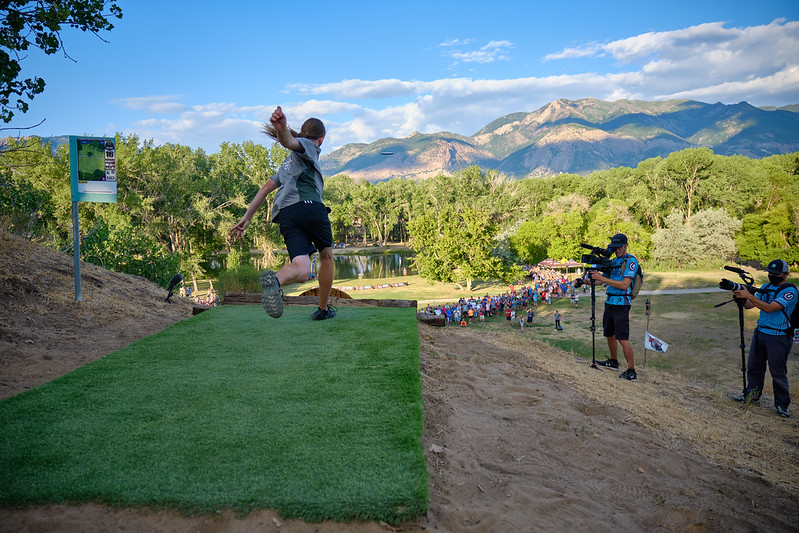 All of the pressure was now on McBeth, whose forehand hyzer hit the ground just behind the basket, took two deadly hops and settled into the water that backs up to the green.

The two champions made their way down the hill to finish what was now just formality: James Conrad was to be the 2021 PDGA Professional Disc Golf World Champion.

The crowd swarmed in, and Conrad lifted the trophy in triumph.

“I’m slightly in disbelief,” Conrad told the jubilant crowd. “It was such a fun day. I had such a great card out there. Paul McBeth is such a great competitor; I’m honored to compete with him. Kevin and Calvin—such great humans to be playing disc golf with. To be able to make that shot from over 200 ft on 18 — it still almost doesn’t feel real. I mean, I saw it go in but it’s still hard to even believe.”

It was only the fourth time in the nearly four decades of the PDGA Professional Disc Golf World Championships that the MPO division went into a sudden death playoff, and the second time for Paul McBeth who had come out on top of a famous duel with Ricky Wysocki in 2014.

This time it was James Conrad’s day.

The images from this day will continue to pour in for weeks, and the legend of Conrad’s win will endure as long as people talk about disc golf.

Such an amazing moment for all of the disc golf community. Congrats James and Catrina! Well written Matt, PDGA should be very glad they brought you on!

The title of this article should have been "One For the Ages!"

uh, Matt... I am old enough to have heard that line before. It was Vin Scully after the famous Kirk Gibson homerun in 1988. But great to bring that line back ... "In a PDGA Professional Disc Golf World Championships that had already been so improbable, the impossible happened."

Being from St.Louis, I have to go with Jack Buck's call after Gibson's homer "I can't believe what I just saw!" combined with Buck's call after Ozzie Smith won a World Series game with his first career Home run "Go crazy, folks, go crazy!"