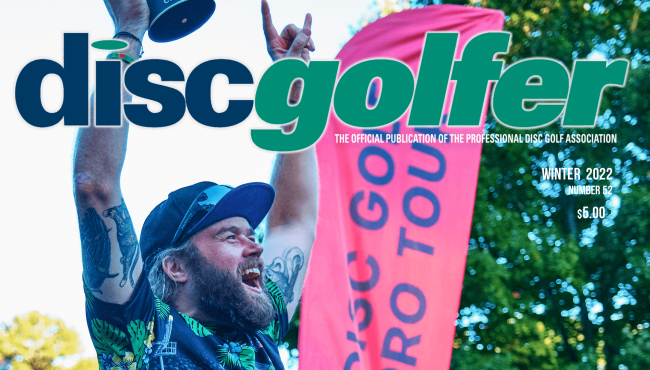 The story has been told so many times now but it bears repeating: the onset of the pandemic in March of 2020 brought disc golf to a grinding halt, only for it to become one of the first sports to open back up as it proved particularly well-suited to life under new public health restrictions.

An unprecedented boom followed as legions of players—old and new—began flooding the courses. Disc sales spiked, tournaments filled to capacity, and the PDGA’s active membership jumped more than 30%.

The sport also seemed to be breaking through at the elite professional level as the Disc Golf Pro Tour struck broadcast deals with CBS Sports Network and ESPN, filling the void left by the cancellation of other major sporting events.

The momentum continued through the offseason and into 2021. In February Paul McBeth announced a landmark sponsorship deal with Discraft worth $10 million. In March, Sports Illustrated published an in-depth article proclaiming that “Paige Pierce is Taking Disc Golf to the Moon.”

By the time the 2021 season arrived in earnest, expectations had been raised to unseen levels. The anticipation among players and fans alike was palpable.

But the pandemic was still raging and, despite a growing eagerness to return to normal, the first Elite Series events in February and March of 2021 had a distinctly 2020 vibe about them. Spectating was severely restricted, and players and tournament staff were subject to strict COVID protocols. 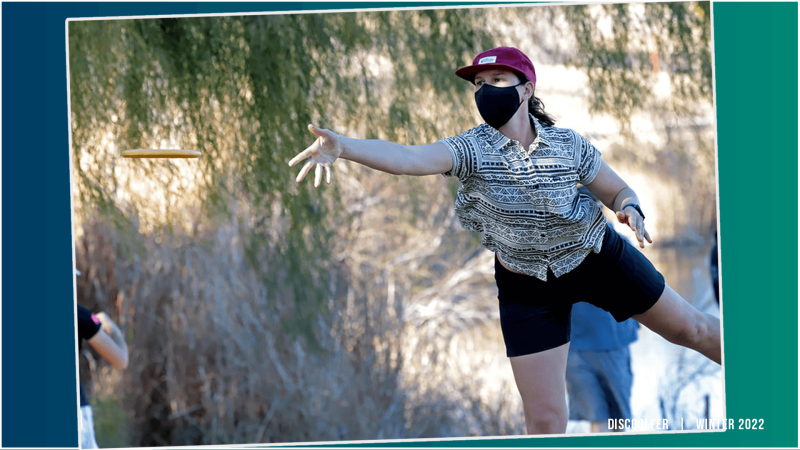 Strict COVID protocols were in place during the early part of the 2021 season. Photo: Conrad Meyer / PDGA Media

It wasn’t until the Dynamic Discs Open at the end of April that we got our first glimpse of a “new normal” —one that for disc golf, would be filled with iconic moments under a bright new spotlight.

The first moment came in the form of a Ricky Wysocki putt.

Wysocki had—improbably—been in the hunt through three and a half rounds, despite the emotional weight he carried following the sudden passing of his sister, Lauren, on the eve of the tournament.

His story, and the inspired golf he produced over those four days, won over the fans who continued to pull for him to win even after McBeth stretched his lead during the early goings of the final round.

It wasn’t until Wysocki made back-to-back bogies on holes 13 and 14, giving McBeth a seven-throw lead with four to play, that it became clear that a comeback was not going to happen.

Wysocki appeared deflated, and so did the fans who, gathered in the largest numbers since the beginning of the pandemic, had poured out their heart supporting him. What did it all mean, if not for victory?

We were soon to find out.

Standing at the drop zone of hole 16, surrounded by fans, Wysocki let sail a majestic, lofting hyzer putt clear over the water, 70 feet, and into the heart of the chains. 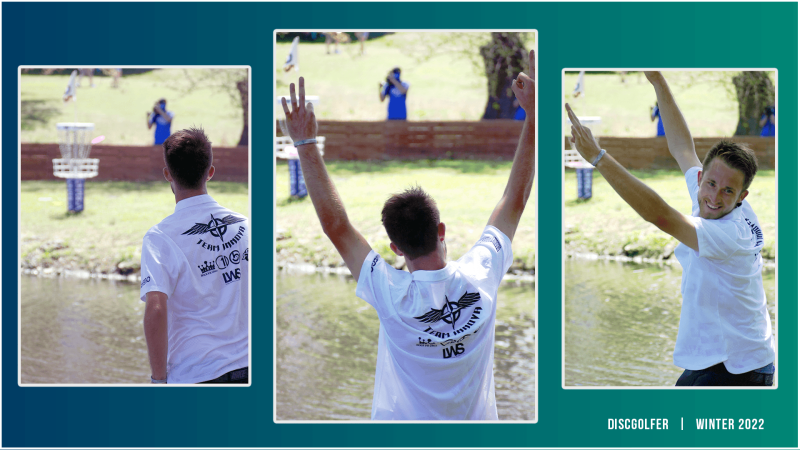 Ricky Wysocki hits a 70 foot putt from the drop zone on hole 16 at the 2021 Dynamic Discs Open. Photos: PDGA Media

The gallery erupted with an outpouring of emotion that transcended championship titles — even one as significant as the Dynamic Disc Open. This was a celebration of the man, Wysocki, who had faced down personal tragedy and shown that, despite coming up short in his heroic effort to win this tournament, was every bit the hero. 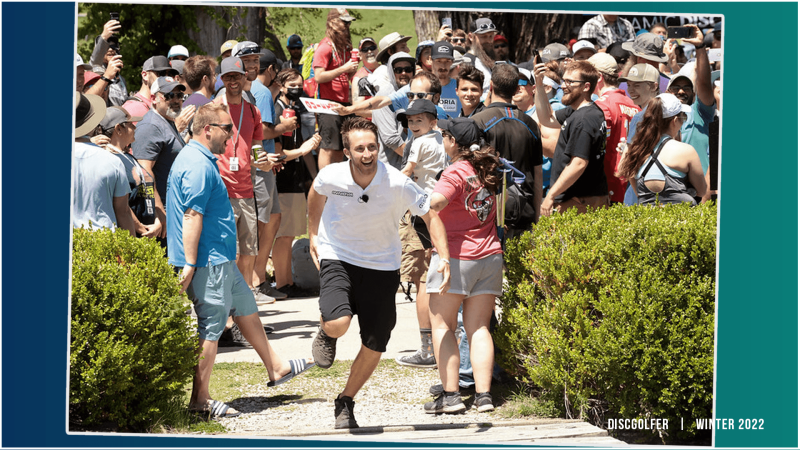 Wysocki runs through the crowd across the bridge to the island green at the Emporia Country Club. Photo: Conrad Meyer / PDGA Media

It was one of the great moments in disc golf history, and even more were soon to come.

If expectations had been raised for the 2021 disc golf season, this was nowhere more true than at the 2021 PDGA Professional Disc Golf World Championships.

Following its outright cancellation in 2020—the first time a World Championship had not been contested since the Pro Worlds debuted in 1982—five-time champions Paul McBeth and Paige Pierce had waited nearly 24 months to defend their titles.

Each would be attempting to win their sixth under the brightest spotlight and against the deepest field of talent than they had ever had to contend with. 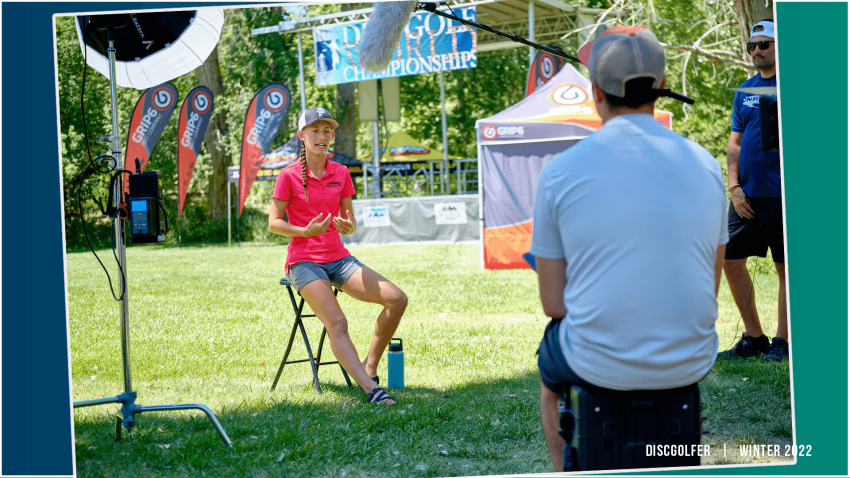 Remarkably, these two champions showed that they were up to the challenge—fighting their way through five rounds to head into the 90th and final hole of the tournament with a one-throw lead.

But on this day in June, on a disc golf course in Ogden, UT, the impossible happened. Twice.

The win probability for McBeth and Pierce may have peaked following their tee shots on 18, as both were in better position than eventual champions Catrina Allen and James Conrad.

But Allen and Conrad would go on to throw approach shots that would change the course of disc golf history. 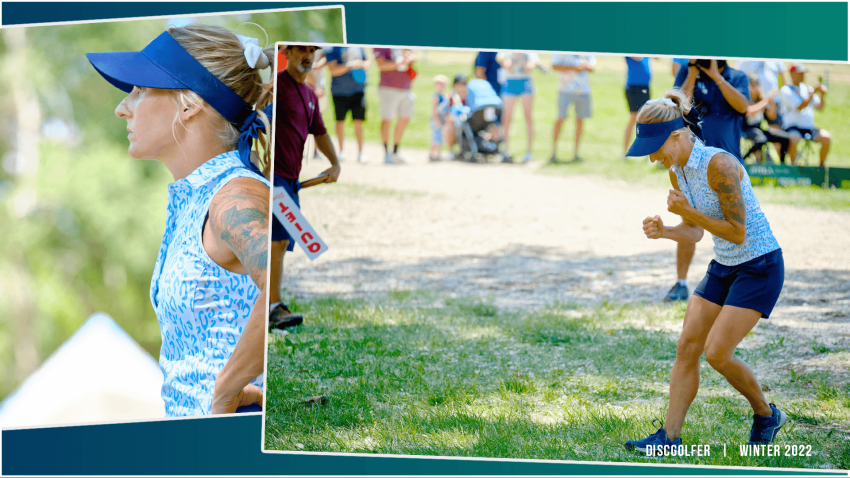 Catrina Allen gambles on an aggressive approach shot on the 18th and final hole of the tournament. Photos: Kevin Huver / PDGA Media

Allen, whose tee shot had barely cleared the water, was still in a difficult position to attack the green after her second shot. Under normal circumstances, the play would have been to layup, take the bogie and move on. But these were not normal circumstances. This was the bottom of the ninth, two outs, down by one.

She cut a sharp anhyzer approach which looked to be panning out early, only to catch the very edge of the painted circle which defined the OB line behind the basket.

Allen’s successful gambit put the pressure squarely on Pierce who, uncharacteristically, threw a nervy approach shot that faded out-of-bounds short of circle 1 and then hit the top of the basket on her circle 2 bid to save bogey.

Allen made par for a two-stroke swing and earned her second World Championship.

It may have been the most dramatic turnaround in Pro Worlds history— at least up to that point. By the end of the day, it would stand second to what has since become known as the “Holy Shot.”

Conrad’s throw-in birdie from 247 feet to force a playoff and ultimately defeat Paul McBeth is one of those moments whose historical importance was immediately apparent to anyone who witnessed it. 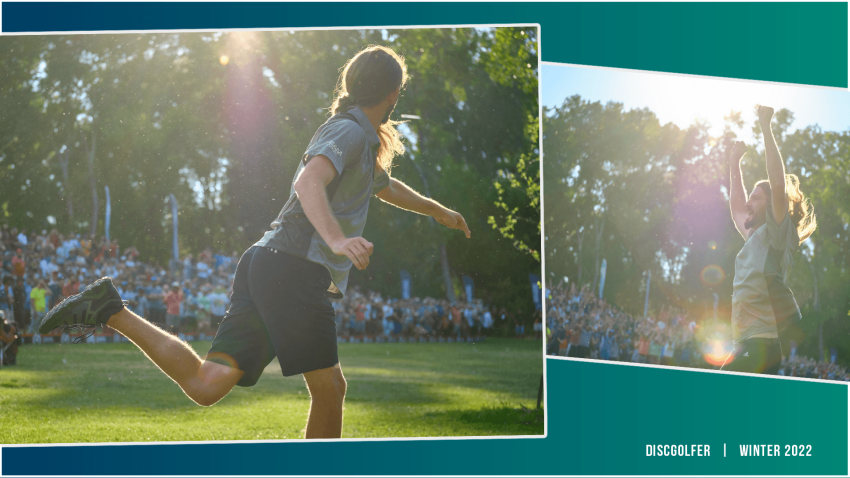 Images were seen around the world by millions within hours. Comparisons to some of the great moments in sporting history abounded, but all of them fell short. There was nothing quite like this.

It was the perfect shot, at the perfect moment to consummate disc golf’s coming out party. It said, in the loudest way possible, “Disc golf has arrived.”

Other great moments followed through the back half of the season—none quite as blockbuster as the “Holy Shot”, but then again, how could they be?

David Feldberg fought through a nail biter of a final round to become only the second man (Brad Hammock, 2002-2004)  to win three consecutive Masters world titles, and Jennifer Allen had a showstopper throw-in to win her first major title, defeating Des Reading in a playoff at the Tim Selinske U.S. Masters Championships.

Disc golf business news came to the fore in late September as the PDGA announced that it was entering a new partnership with the Disc Golf Pro Tour that would make it the “Official Pro Tour of the PDGA”, suspending the National Tour after nearly 20 years and signaling a new era of cooperation at the sport’s elite professional level. 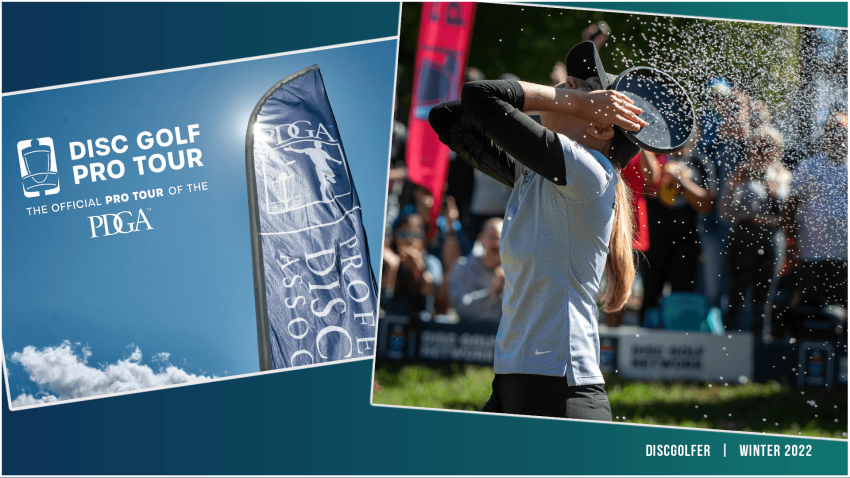 Shortly thereafter the DGPT announced that, with the help of new corporate sponsors, it would be offering the biggest purse in the sport’s history—$250,000— at the Pro Tour Championship, with $30,000 going to the winners of both the men's and women's divisions. Nathan Queen claimed the $30k, surprising and delighting everyone as he pulled off his incredible long shot victory.

On the women's side, the record payday helped Missy Gannon set a new single-season winnings mark at $67,000; she swept the late season with wins at Throw Pink and DGPT finals.

McBeth surpassed his own single-season winnings mark at $88,900. He got redemption for his unlikely loss at Worlds by edging out Kyle Klein on the first hole of sudden death playoff at USDGC—his third US Championship and 16th major title overall. 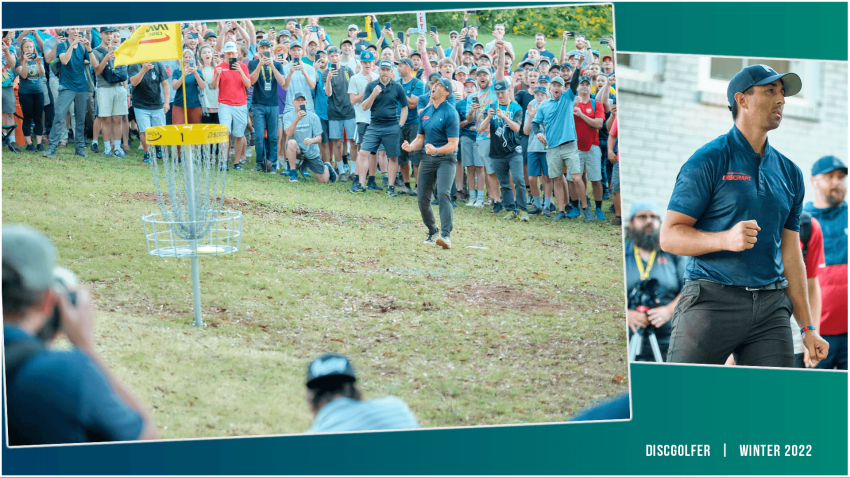 2021 proved that the sport was not going to squander the gains it had made during the pandemic. From the recreational and amateur levels to the top of the professional game, all signs continue to point to a bright new era.

This has been a record year for PDGA approvals of equipment by the Technical Standards Working Group. There were 160 approvals (144 discs and 16 targets) in 2021, which is 55% more than the 104 approvals in 2020 and 35% more than the previous record year of 128 approvals in 2017. And there were 24 new companies making PDGA-approved equipment in 2021. Of these, 15 of the new companies are located outside of the U.S. In all, there are 160 companies with PDGA-approved equipment and 120 of these are still active companies, which clearly show that disc and target manufacturing is a stable, sustainable business to be in. All of these numbers, like so many other measures of disc golf growth, bode well for the future of disc golf!