Following a rain-soaked start to the 2021 Dynamic Discs Open, day two saw plenty of sunshine and hot scores as players got their second crack at the attackable Jones Gold course.

Ricky Wysocki led the charge, catapulting up the leaderboard and setting a new course record in the process.

After making eagle on the 850-foot par-5 12th, Wysocki, who had played Jones Gold blind during the first round following an overnight visit to his ailing sister, was only one stroke off the pace for a perfect 18-under.

“Today was solid,” an emotional Wysocki said after putting the finishing touches on his round 2 gem. “I got to see the course during day one and made the adjustments during day two and was able to shred and get myself in contention.”

Well-known for his long-range putting acumen, Wysocki was so accurate with the drivers (85% fairways hit according to UDisc) that he did not even need to attempt a C2 putt the entire round. He finished with 13 birdies and an eagle to card the course-record 15-under par.

Wysocki will join the lead card along with the three men atop the MPO leaderboard, Ben Callaway, Eagle McMahon and Calvin Heimburg, as the action moves over to the Emporia Country Club course for day three.

“There won’t be many adjustments to be made,” he said about his plan heading into the latter half of the event. “If the wind picks up, I’ll be throwing the same shots I was throwing here. And just keep making those putts.”

It is the second-consecutive PDGA Elite Series event, following the Jonesboro Open, at which Callaway jumped out to a hot start. But unlike at Jonesboro, where he struggled in the second round, Callaway was able to back up an outstanding opener with another great round. 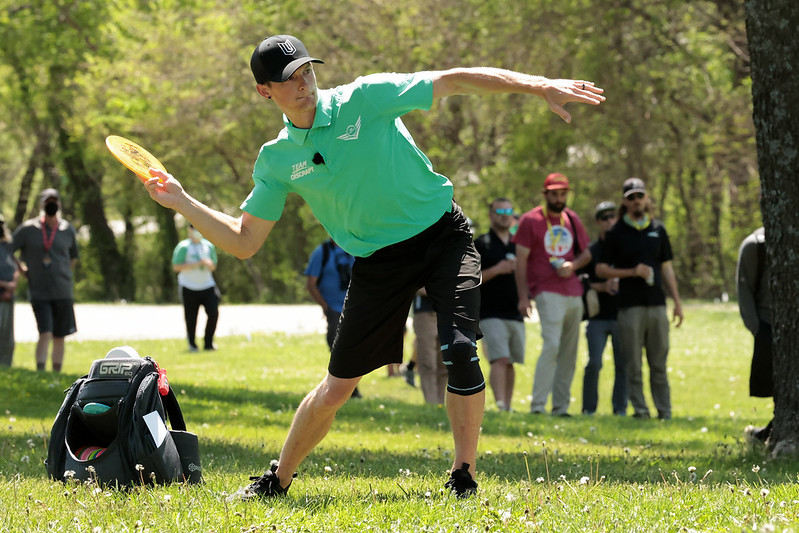 Ben Callaway lines up a forehand approach enroute to a 14-under second round. Photo: Conrad Meyer / PDGA Media

McMahon was on pace to match Wysocki at 15-under until a bogey on the challenging par-4 18th. It was the only blemish during a round peppered with highlight-reel moments that included an astonishing eagle on the 585-foot par-4 8th. It was enough to prompt Disc Golf Network commentator Jeremy Koling ­– who can throw the disc pretty far himself­­­ – to exclaim that 'sometimes, this guy just breaks the game.'

That said, it won’t be highlights, but a win, that McMahon will have in his sights as the event moves over to the Country Club course.

“The fundamentals are still the same,” he said about his plan heading into the final rounds. “Go out there and throw it between the lines and take the birdies when they come. Being tied for the lead after the first two days, I’m in great position, and tomorrow is when the real golf starts.”

Heimburg may not have made as many highlight reel shots as his co-leaders, but he made just as many birdies. And with his prodigious power, as well as his penetrating, low-flying shot shape, he will have an excellent chance to come out on top this weekend.

Live round 3 coverage begins on the Disc Golf Network at 1:00 p.m. CT.