For the first time in a long time, it seems like anyone’s ballgame at Pro Worlds 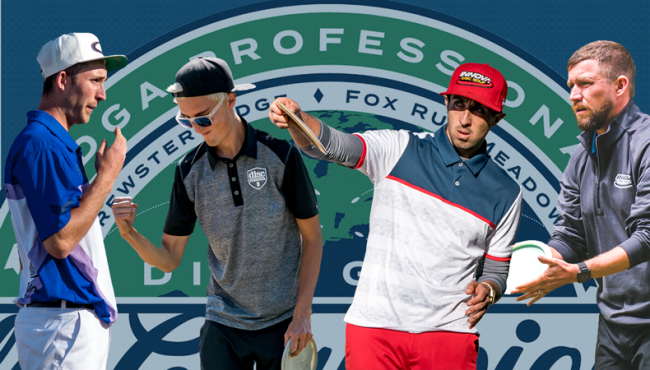 While Ricky Wysocki (far left) and Paul McBeth (second from right) are the most recent PDGA World Champions, a new crop of contenders has emerged in 2018. Photos: Alyssa Van Lanen | Illustration: Matt Gregoire

JEFFERSONVILLE, Vt. – It’s been seven years since anyone not named Paul McBeth or Ricky Wysocki has won a PDGA World Championship in the Open division. The last winner prior to that dynamic duo – 2011 World Champion Nate Doss – won’t be in attendance when play kicks off Wednesday for this year’s iteration of Pro Worlds at Smugglers’ Notch Resort in Jeffersonville, Vermont. In fact, only two other champions – 2003 and 2004 winner Barry Schultz and 2009 victor Avery Jenkins – will tangle with the venue’s Fox Run Meadows and Brewster Ridge courses over the week’s five rounds, a fact that would appear to tip the odds even more in the favor of the two men who have dominated professional disc golf for the better part of the decade.

Add to the mix that McBeth is, once again, the world’s highest rated player and Wysocki has won three out of the four tournaments he’s played at Smugglers’ Notch, and it’s hard to see anyone but the two pedigreed champions adding another piece of hardware to their mantle on Sunday.

At the same time, a new level of parity emerged this season. While McBeth and Wysocki combined to win 85 percent (17 of 20) of PDGA Elite Series events and professional Majors in 2017, that number is down to just 42.9 percent (six of 14) thus far in 2018. A large chunk of their winning share has been stolen by one player, but a new crop of contenders has put the touring scene on tilt at various points throughout the past 12 months. It seems, then – for the first time in a long time – that it’s not quite a foregone conclusion who will be crowned World Champion this week.

McBeth enters the tournament looking not only for the ring that will fill up his entire throwing hand, but another crack at Smuggs. After finishing in fourth place at the Green Mountain Championship – which is also played here – in 2016 and then winning the Disc Golf Pro Tour Championship at the same venue, McBeth’s 2017 Green Mountain State campaign met an early end when he suffered a back injury and withdrew midway through the second round. Despite the disappointment, he said the development wasn’t providing him with any extra drive this week.

McBeth is at full strength, and the putt that catapulted him to his run of four straight world titles looked crisp en route to his second-place finish two weeks ago at the MVP Open. If he again connects on 35 percent of his attempts from beyond the arc and keeps it between the lines, he’ll be tough to beat.

That’s because – until 2018, at least – most of the time since McBeth’s last world title has been ruled by Wysocki. The Ohio native enters this week looking to become only the fourth three-time Open World Champion and only the third to accomplish that feat in consecutive fashion. While 2016 and 2017 saw Wysocki rack up an astonishing .500 winning percentage, he’s battled inconsistency through 2018. Sure, he’s added two 1100-plus-rated rounds to his career resume, but he also dipped below 1000 two times and has seen that winning percentage dip to .316.

Coming to Smugglers’ Notch as not only the defending world champion, but also a three-time winner at these tracks, brings high expectations. They might be higher, somehow, for Eagle McMahon. The 20-year-old Colorado native has set the disc golf world ablaze this season as he’s broken out for three PDGA National Tour victories, his first career Major title, and an average finish of 2.6. Displaying 99th percentile distance, accurate forehand aim and – most importantly – a newfound poise during crunch-time, McMahon has shown he can win from anywhere on the leaderboard. At the Las Vegas Challenge and the Konopiště Open, he built an early lead and held off a surge of aggressive pursuits. At the Glass Blown Open and the Beaver State Fling, he took his own assertive actions with late-round heroics that vaulted him to the top of the podium.

He enters this week, though, with question marks aplenty. He took off more than a month after Konopiste and came back for the MVP Open with some rust, tying for eighth place – though he did trend in the right direction with each round of the tournament. More concerning is his past performance at Smugglers Notch. In seven sanctioned tournament rounds, McMahon has cobbled together a 998.7 average rating on the back of 27 out-of-bounds strokes.

If there is one harbinger of good, it’s this: McMahon sports the second lowest OB rate on tour this season (.073). He’ll need that if he’s to succeed in Vermont and become the third 20-year-old to win an Open World Championship.

McBeth, McMahon, and Wysocki have combined to win 71.4 percent of the upper echelon events this season. They’re the heavy favorites this week, but McBeth is the only one of them who has won on the elite stage since Konopiště. That’s left the door open for the emergence of a handful of additional contenders.

United States Champion Nate Sexton added $7,000 to his bank account and another significant win to his name with a measured, consistent performance at the Ledgestone Insurance Open. Though he might not boast the same ceiling as the event favorites – his 1086-rated second round at the Memorial Championship in March is his highest of the season – his floor is safe, as he’s logged 28 rounds over his rating in the last year. He’s finished in ninth and eighth place at Smugglers’ Notch since 2016, but he says he knows what he needs to do to make the jump to number one.

“I think five rounds is a good thing, from my perspective,” Sexton said. “It gives more time – it’s less chance for somebody to get hot and get away…These courses, I think they’re really good. I don’t think there’s anything game plan-unique about them that’s making me do anything super strange. I’m pretty much just getting after it. For me to win it’s going to take executing the game plan at a 90 percent or better clip…which, that’s hard to do.”

Though it might reek of recency bias, James Conrad’s victory in Massachusetts two weekends ago vaulted him squarely into the contender conversation for this week. Like McMahon, he sports elite distance; like Wysocki and McBeth, a deadly long-range putting game; like Sexton, a quiet calm on the course.

He’s proven the ability to win in the spotlight during three-round events where McBeth has given chase, which is no small feat. But how about holding that same level of focus and composure for an extra two rounds?

“Trying to maintain it for five days in a row – it’s not an easy thing to do. It’s not an easy thing to do for three days, either,” Conrad said. “I feel like I’m in a good head space right now, and if I can just stay where I’m at and keep my cool and realize it’s for the long haul – maybe lay up a couple times here and there if I need to – you’ve got a little time to play the slow, long game at it. Just – it’s a matter of keeping your head in the right space for a whole week, and I’m trying to do it.”

He won’t be the only one. Players like Simon Lizotte – the tournament’s fourth-highest rated player who has been able to sneak up to the Notch a couple times this season thanks to his new home base in New England – and Chris Dickerson – he of 23 victories and a runner-up Ledgestone finish in 2018 – are easily in the mix. McBeth name-checked 22-year-old Kevin Jones and 18-year-old Anthony Barela as two players who could make noise. And we haven’t even discussed 2016 United States Champion Jeremy Koling, who also has two Elite Series victories to his name since 2016, or two-time Green Mountain Championship runner-up Michael Johansen.

In five days, it will all be settled. Until then, enjoy the show.

I predict a third consecutive Wysocki win. Yup it's sockibomb.