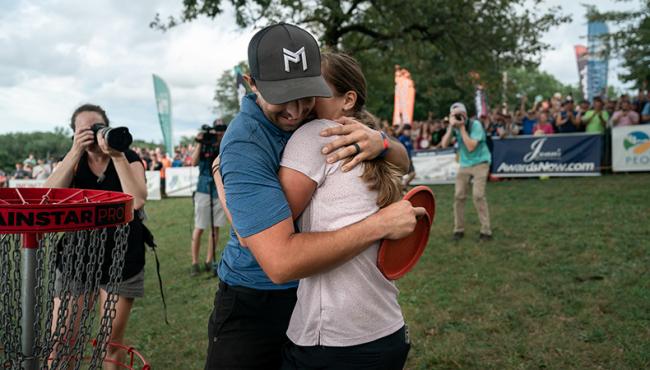 PEORIA, Ill.—It had been 1,470 days since Paul McBeth last won a world title in 2015, and entering Saturday’s final round of the PDGA Professional Disc Golf World Championships at Lake Eureka, there was almost an air of inevitability for disc golf’s highest-rated player. The Huntington Beach, California, native was up two shots on Emerson Keith, who had displayed mettle all week but wasn’t yet battle-tested on this kind of stage, and six clear of longtime foe Ricky Wysocki. With conditions relatively clear after morning storms made their way through this midwestern outpost, the buzz around tournament central trended toward the four-time world champ finally tracking down that fifth ring that had eluded him for more than three years.

Wysocki, however, had other ideas.

A two-time world titleholder in his own right, the Ohio product made sure McBeth needed every last one of those insurance strokes during a final round flurry where the storied rivals battled all the way to the final hole. After one last desperate attempt to throw in for eagle on 18, Wysocki finally succumbed to McBeth and the long journey to number five finally came to an end in front of 2,200 spectators.

“It feels like it’s been a long time,” McBeth said. “Fourteen hundred days is awhile. It feels great. I wish I could’ve cleaned it up a little at the end and not made it so dramatic, but I’m sure all the viewers enjoyed that, so it feels great.”

After Keith carded six bogeys in the first eight holes, all the focus went to the two world champs on the lead card. Wysocki came out hot, but he and McBeth were both at 3-down for the round when play got to the baseball field on hole 5. That’s when McBeth overpowered a fairway driver and went out of bounds deep on the way to a double-bogey 5. Wysocki put his drive to 27 feet, let out an emphatic fist pump, and finished the job for a three-shot swing.

“I thought I was kinda playing it safe there, so I was really surprised by that,” McBeth said. “But I knew Emerson didn’t have the greatest start and he was the one who was closest to me at that point. But then after that double bogey Rick got within three, and I knew if I shot great the rest of the way it wouldn’t get too close.”

Wysocki, though, was up to the task, and the dynamic duo settled in for their duel, matching each other hole for hole with a flurry of parked shots until hole 13. That’s when Wysocki left his second drive too high and it faded left and trickled OB. He slammed a 60-foot death putt to save par, but as he walked toward the basket he swatted at the trees in frustration as he lost a stroke to McBeth to fall behind by four with five holes to play.

He was about to get that one back, and a couple more with it. After McBeth’s roller on 16 climbed up a tree stump, he left his second shot to 40 feet. Wysocki’s own roller left him in a spot to easily get up and down for the birdie 3, but McBeth missed his birdie bid as cars drove through his line of sight. On 17, McBeth pulled his putter drive to the right side of the island and couldn’t connect on the deuce, and Wysocki again was parked for birdie.

“At the end of the round that’s really where I had the hiccups, but luckily I had enough by then,” McBeth said.

Just enough. The gap was down to two going into the final hole, and Wysocki dialed up a smash that flew out over Lake Eureka before flexing back in bounds to about 150 feet from the pin on the 711-foot par 4.

McBeth threw a safe drive and a safe approach before Wysocki had a chance to go for the hero shot to eagle the hole. His forehand Pig toss flew just past the chains, leaving McBeth the chance to lay up for the title.

“Rick was right there pushing,” McBeth said. “I had no idea what scores were. I just kinda knew I was up four, I was up three, I was up six, you know? So I kinda just knew that. So when we just added up the scorecards I was like he shot 14? That was wild.…I knew Ieft it up to a thrower’s chance to 2 it.”

When it was all said and done, Wysocki had matched the course record Eagle McMahon set earlier this week and outdid him in the ratings category with an 1105 performance—all with a nasty infection on his ring finger. It was so bad that before the round he went to consult a local surgeon, who suggested Wysocki go to the emergency room for treatment after the round. But knowing that he’d performed so valiantly at less than 100% health that wasn’t quite enough to stem his disappointment.

Keith and James Conrad tied for third place at 36-under par. Even though he struggled to start, Keith was pleased with a back nine that found him battling back from adversity with six consecutive birdies, and he’s confident that this week marked the start of bigger performances to come.

“I’d like to think that we can expect more from me,” Keith said. “This was my first time being in this position, and I feel like next time I can handle it better.”

Chris Dickerson logged his second career fifth-place showing at Worlds after coming in at 35-down, and Nate Sexton fired off an 11-under par final to move into sixth at 33-under par. Kevin Jones finished in seventh place with a 29-under par week, while McMahon and Simon Lizotte tied for eighth at 28-under. Eric Oakley dropped two slots and into 10th place, where he tied with Nikko Locastro with a 25-under par 292 total.

When McBeth won four straight titles from 2012 to 2015, it was widely viewed as his prime. But he is still just 29 years old, and he doesn’t think he has peaked. He showed that this week.

McBeth said he plans to skip next weekend’s Delaware Disc Golf Challenge, which will put him back in action at the MVP Open at Maple Hill—an event where he’s been the runner-up the last two years—on August 30.