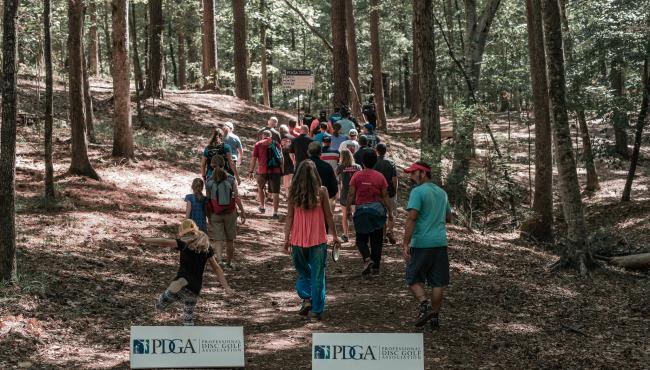 The PDGA International Disc Golf Center located at Wildwood Park in Appling, Ga., is the mecca for the sport of disc golf and a must see for every disc golf enthusiast. Photo: Alyssa Van Lanen Images

Disc golf is growing, and so are the opportunities for the sport’s elite players to claim one of its most coveted prizes: a PDGA Major Championship Title.

The PDGA Board of Directors has approved the details of the PDGA Champions Cup, which, along with the PDGA Professional Disc Golf World Championships, European Open and USDGC/USWDGC, will be the fourth pro-only major championship on the annual disc golf calendar.

The inaugural edition of the PDGA Champions Cup will be held April 13-17, 2022, on the W.R. Jackson Course at the International Disc Golf Center in Appling, Ga. It will feature four rounds of traditional stroke play over the first four days, and finish with two rounds of seeded match play between the top four players in both the FPO and MPO fields on the final day.

The event represents the culmination of years of work by Board member and PDGA Majors Committee Chair Nate Heinold, who has been the lead advocate for the creation of an additional Major, and has personally shepherded the project from its inception.

“I grew up a huge fan of traditional golf and didn’t really miss a major for 10 years starting with the 1997 Masters,” Heinold reflected following the Board’s approval. “When I got interested in disc golf, I felt that if I was to ever get into the administrative side of the sport, I would push to make things more professional and standardized by trying to get the PDGA schedule to include four consistent majors each year.

“When the Majors Committee first started meeting about this event, we made it a goal to make the event unique. We discussed a variety of unique formats, but ultimately settled on something familiar: four rounds of stroke play with a final four players going into match play. This kind of format creates a lot of excitement because anyone can truly win going into the final day. Moreover, with so many of the sport’s biggest events taking place in the latter half of the season, we felt it would a great opportunity to kick-off the season in the spring when the event can have more oxygen to breathe and not compete with other big events.”

Future editions of the Champions Cup will be bid out to premier disc golf locations and event hosts beginning in 2023, but the IDGC, which has been the site of four professional majors including the 2017 PDGA Professional Disc Golf World Championships, was a natural choice for 2022 considering the compressed timeframe available for putting on a major event.

Veteran tournament director Robert Leonard #21676 was tapped to lead a host team for the Cup’s first installment. Leonard has overseen numerous premier events including the 2013 Tim Selinske US Masters Championship and the 2018 PDGA Amateur Disc Golf Championship, both major championships.

“Running any disc golf event requires a passion and love for the game; the tier doesn’t matter,” Leonard said in anticipation of today’s announcement. “So, it all starts there. To do a major, you have to have people around you that you trust. This will be the third major I’ve been the TD for and for all three, Chuck Connelly has been my assistant TD. The relationship he and I have is both one of friendship and of opposing strengths.

“The moment this opportunity came to me, I called Chuck. Simply put, if he was out, I was out. But knowing Chuck’s passion and love for the game, I knew he would say yes. And for that, I’m fortunate and thankful.”

Should include play on all three courses to truly test the players and showcase the IDGC.