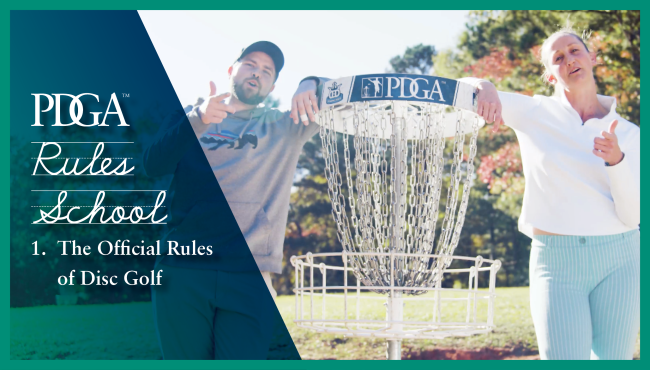 The series, which was inspired in-part by the influx of new players in the wake of the COVID-19 pandemic, is intended as an easily accessible guide for players who may be playing in their first organized leagues or tournaments, as well as a resource for experienced players who want to brush up on specific sections of the rules.

The complete series is available to view on the PDGA YouTube channel, and PDGA.com will feature one of these videos each week in a supplementary article that will review the important concepts covered in each video and provide additional illustrations and examples.

As the worldwide governing body for the sport of disc golf, developing a clear and comprehensive set of rules has been central to the PDGA’s core mission.

The organization maintains two documents – the Official Rules of Disc Golf and the Competition Manual for Disc Golf Events – that together comprise the rules, regulations and best practices for the sport.

Each year these documents are updated by the PDGA Board of Directors based on feedback from the PDGA Rules Committees, as well as players and event organizers.

Players who compete in PDGA Elite Series and PDGA Major events are required to pass the Certified Rules Official Exam, demonstrating a firm grasp of the Official Rules and Competition Manual. But it is crucial for any player who wishes to compete, even at the local level, to familiarize themselves with the fundamental rules and regulations.

One of the most important requirements in the Official Rules of Disc Golf is that players watch the other players in their group throw in order to ensure safety, help find lost discs and enforce the rules.

Disc golf is, like traditional golf, almost entirely self-officiated, and even at large events there will not be officials with each group to make calls and issue penalties for rules violations. In order for the sport to be fair for all players, it is crucial that players be willing to watch each other and call violations when they observe them. It may not always feel great to call a violation on a card mate, but remember – it’s not personal, rather, it’s the only way to maintain the integrity of the game.

For more information on the Official Rules of Disc Golf, visit www.pdga.com/rules and be sure to check back each Thursday over the next twelve weeks for a new installment of PDGA Rules School.

See you out on the course!