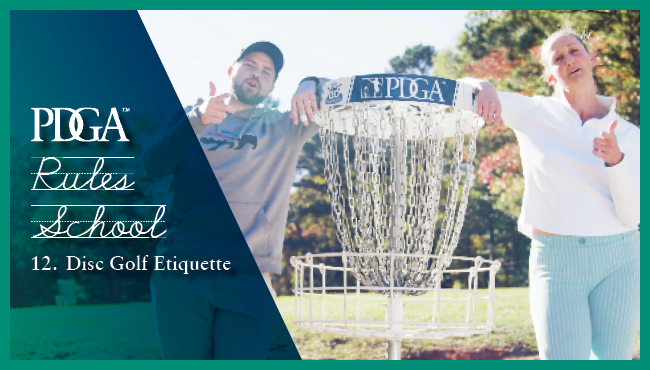 We all want to play our best and score well. But at the end of the day, what we’ll be remembered for most in our disc golf careers is the way we carried ourselves on and off the course.

Disc golf etiquette helps us understand what is expected of us in terms of courtesy and custom on the course.

In the final episode of PDGA Rules School, we’ll be looking at disc golf etiquette, both as it appears in the Official Rules of Disc Golf (ORDG) and as part of the Disc Golfer’s Code.

Some elements of etiquette are informal - like clearing out your disc from the basket before another player putts, or calling “fore!” if a disc is heading towards a player.

Other elements of etiquette are included in the PDGA rulebook as courtesy rules (ORDG 812). For example, players are required to stay behind the thrower and to keep quiet while others are throwing.

They are also asked to refrain from distracting or unsportsmanlike conduct like shouting, cursing, hitting or kicking their bag or park equipment, littering or allowing smoke to disturb other players.

Players also have formal responsibilities to their group - like watching each other throw to ensure fairness and to help find lost discs, and to assist in keeping score when asked.

The Code, which was released in January 2016, was spearheaded by Hall of Famer Dan “Stork” Roddick, who challenged the PDGA Board of Directors and PDGA Staff to come up with a code of conduct that applies to all disc golfers on every disc golf course.

As Stork put it, “"There aren’t many words here, but they may hold the key to the sustainable growth of our sport. Our previously exclusive pastime is expanding at a positively viral rate and we are no longer just a few kids fooling around in the park. If we have aspirations to be a significant part of the global (and local) sports scene, it’s time for us to step up and represent our very best. Consider how many disc golf shots are now taken every day. Each one of those flights is a tangible part of building and maintaining a bright future for our game. Our time has come to get serious about having fun. The Disc Golfer's Code - Know It and Throw It!”

Thank you for checking out PDGA Rules School! For more information visit the Official Rules of Disc Golf and be sure to check out the complete series is available to view on the PDGA YouTube channel.

See you out on the course!