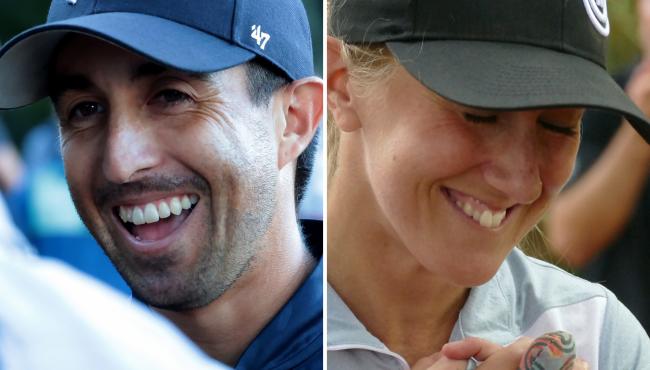 Championship Saturday at the Winthrop Arena was set up to be a down-to-the-wire finish.

McBeth needed a birdie on the 17th and nailed a 60-foot birdie putt. Both the five-time World Champion and Klein, the 2020 PDGA Rookie of the Year who fired off a 10-under round to jump four spots, went for the win with 50-foot putts on the treacherous 18th green. Both missed and it was off to the first for sudden death.

With honors, Klein's drive faded early into the trees and McBeth followed with a bullet straight at the basket. Klein's bid was solid but missed, leaving McBeth with an circle's edge putt for the win. He drilled it and followed with an emotional and powerful celebration.

Gannon built the lead to three strokes and saw it drop to one over Valerie Mandujano coming down the stretch. The 17th nipped Mandujano and a surging Kona Panis, with a 3-under round, came into contention. A birdie run from Panis on the 18th, which would've added even more pressure to Gannon coming into the daunting finisher, fell short.

As she did over the final two days in Rock Hill, Gannon navigated Winthrop's challenges for the win.

For the 22nd year, Winthrop delivered.

WOW YOU GUYS SUCK ****. THANKS FOR RUINING THE TOURNY THAT NO ONE REALLY GOT TO WATCH. THIS IS EXACTLY WHY I DONT SUPPORT YOU GUYS ANYMORE. BUNCH OF DUMB*****.

so were you going to stay in the bubble for a month while you waited for free coverage. and as a follow, when you say don’t support you guys, like the PDGA? the ruling body of the sport.
lastly, all caps, I mean you seem to be upset. we should play a round of dg and chill!

The PDGA was not involved in the production of the broadcast.

Wow. Did someone wake up on the wrong side of the bed this morning? Happens in all sports these days it's called the internet. Why don't you go curse everyone out on Instagram who posted who won or Facebook that will give you a whole days fun to do. I wont call u names like you did but I think you get the point chill out homie go suck on your thumb in the corner😂😂😂😂