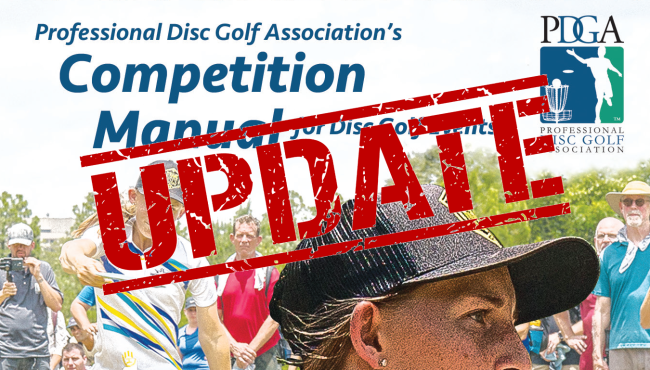 Crafting an official revision of the PDGA Competition Manual is no simple task. The PDGA Competition Committee put in hundreds of unpaid, volunteer hours on the 2018 revision, working to clean up and clarify the verbiage while simultaneously creating new items and editing existing ones. The 2018 revision contains updates and edits based on nearly five years of feedback (last revised on January 1, 2013) from PDGA members, tournament directors, Board of Directors members, PDGA staff, State/Provincial Coordinators, etc.

Many small changes have been included simply for clarity in the 2018 revision, but there are a handful of significant changes that PDGA-sanctioned event competitors and Tournament Directors (as well as their staff) should start familiarizing themselves with now to avoid any issues when the revision takes effect on January 1st, 2018. We believe firmly that the 2018 revision strengthens the integrity and fairness of the PDGA competition system as a whole while also protecting event competitors and Tournament Directors.

The most significant changes included in the 2018 revision, and a brief explanation of each, are listed below.

After many hours of conversation and deliberation by the the PDGA Board of Directors, a motion to suspend Competition Manual 1.10.A and to edit Competition Manual 1.10.B was upheld. The motion will be in effect for the entire 2018 calendar year while the Board and Competition Committee address the valuable feedback received by our PDGA members. We expect these rules to be refined for 2019 with two general goals in mind; 1) ensure that all players that cash in a professional division are properly tracked to maintain the integrity of our professional and amateur divisions, and 2) minimize the requirement for TDs to come up with large quantities of merchandise, sometimes unexpectedly, to payout Amateurs cashing in Pro divisions.

Item 1.10.A remains visible on the PDGA website but has been crossed out to avoid confusion with “Suspended for 2018” appended.

Item 1.10.B has been edited on the PDGA website and will remain as follows for the 2018 calendar year.

1.10.B: An Amateur playing in a Pro division may NOT accept merchandise in lieu of cash in Major, National Tour, and A-Tier events; they may only accept a trophy (if one is available). All cash payouts at or below that place would move down one place causing an additional place to be paid.

The text in each of the sections below is an explanation, not the rule itself. See the 2018 PDGA Competition Manual for Disc Golf Events to read the official text.

This updated section, previously only online, is now added to the print version including the option of the $10 flat waitlist fee in 1.03.B, C, D, & E.

References to the new PDGA Mid-Event Suspension and Cancellation Guidelines have been added.  In the event of dangerous conditions these guidelines provide for the safety of everyone present at a PDGA event and provide a method for TDs to handle suspensions and or cancellations of an event in a consistent manner to protect the participants as well as the integrity of the competition.

References to the new PDGA Mid-Event Suspension and Cancellation Guidelines have been added.

Adds clarity concerning exactly who is a Tournament Official that may make rulings at a tournament.

This section has been part of the Competition Manual since 1/1/2017, but was previously only in the online version.  It is now also included in the print version.

Although each of these 3.08 additions have already been in practice for many years, the Competition Committee felt that it was important to include them directly within the Competition Manual for ready reference over just the inclusion in the TD sanctioning form.

For consistency shouldn't 2.01.F be updated to reflect the changes in 1.10.B?

Also, if you're allowed to have motorized golf carts in some divisions, but not others (3.05.A)... will those divisions' rounds be rated separately?

No reason to rate them separately.

One division gets to ride in carts while all the other divisions have to walk an especially long and hilly course... it might be a bit of a stretch but could be argued that they're not playing the same course. It's a clear cut case where one division has an advantage over the others. But unlike the situation with significantly differing playing conditions across tee times being messy to handle for ratings, this case of splitting out cart-riders is trivial.

If the TD wishes to enter divisions as playing separate courses, they can do it. However, consider that the increased variance from splitting props into smaller groups my offset any beneift from the theory that the playing conditions are different. You then have players upset that the TD tampered with their ratings when the same score doesn't get the same rating on the same layout like they would otherwise. Players in different divisions are never playing the same course even when they are playing the same tees and pins when you consider the probable landing area distances off the tee for different divisions. That's why they play different tees in ball golf so everyone lands in roughly the same area with decent drives.

Is the revised TD report available?