PDGA Partners with UDisc for 2018 National Tour and Pro Worlds

PDGA Partners with UDisc for 2018 National Tour and Pro Worlds 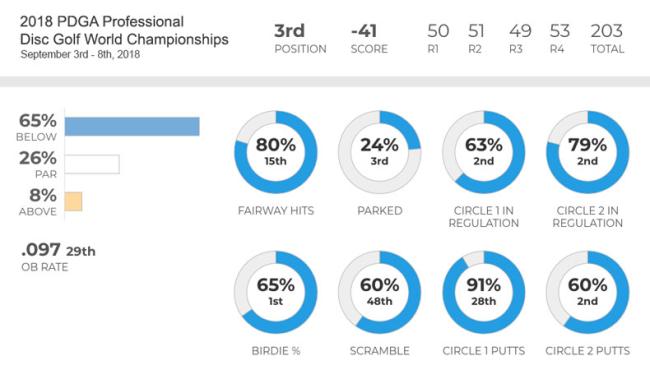 The PDGA is constantly looking for ways to grow the sport of disc golf, a task that comes in many shapes and sizes and one we cannot do alone. We are always on the lookout for others that share our passion and vision and who are creating best-of-breed solutions. Today, we are thrilled to announce a new partnership with UDisc who will provide live scoring and statistics for the 2018 PDGA National Tour Elite Series as well as the 2018 PDGA Professional Disc Golf World Championships.

A Bit About UDisc

For those that aren’t already aware, UDisc is a mobile app developed by friends and fellow Iowa State University graduates Matt Krueger #66791 and Josh Lichti. After completing their degrees in Computer Engineering (with minors in disc golf, 😊), the original Android-only UDisc mobile app was born in 2012.

“UDisc was a hobby project for the first three years. I’d work on new features and updates after work, on weekends, and was using all my vacation time for development,” said Krueger. 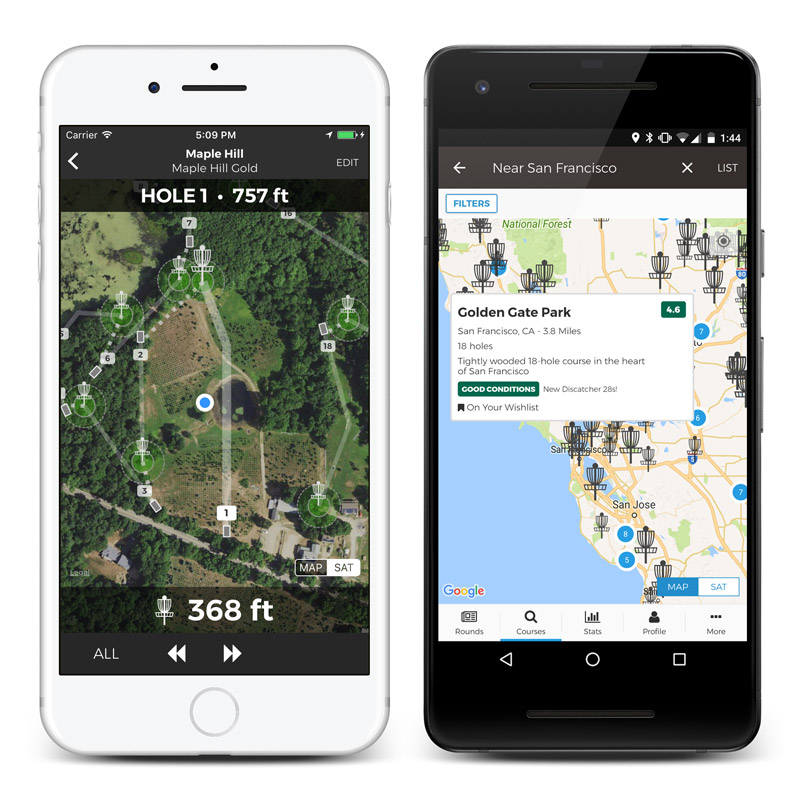 What began as a simple course-locator app with only a few hundred courses in its database has quickly grown to a scorekeeping and stat-tracking app that holds the number one spot for any disc golf-related mobile app on the market for both Android and iOS. Boasting millions of rounds recorded, hundreds of thousands of downloads, and thousands of 5-star ratings/reviews, both the UDisc app and UDisc Pro (premium subscription-based features) have easily proven themselves in an impressively short amount of time.

With the explosion of growth that disc golf has seen in the last decade, it's no surprise that the demand for ways to follow the action has grown right along with it. Some might be surprised to learn that live hole-by-hole scoring has existed for PDGA-sanctioned events for almost 15 years and has come a long way since it's early days in 2003, thanks in part to a handful of disc golf enthusiast that just so happened to have the developer skills needed to build a live scoring platform and the dedication to volunteer their time. 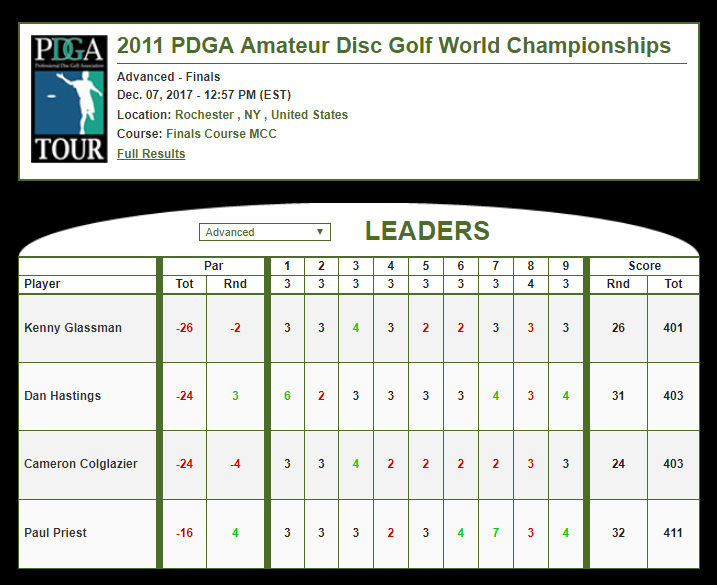 Fast forward to recent years and live scores are no longer just an added bonus for the fans, they are an expectation. The number of events taking advantage of the PDGA's in-house live scoring system has continued to grow. In 2015, the PDGA began working on a redesign with the end-goal of creating a more user-friendly, lightweight application for the viewing public.

In 2017 development continued with a focus on making the configuration of live rounds and submission of hole scores far less intimidating and easy enough for just about anyone to use. By the middle of the 2017 season, this new platform was released and tested for the first time at the 2017 Pittsburgh Flying Disc Open to much success.

The new lightweight scoring application is available to tournament directors of any PDGA-sanctioned event from PDGA Leagues all the way up to PDGA Majors via the PDGA Tournament Manager. If you are a Tournament Director and would like more information, visit the Hole Scoring section of the Tournament Manager Help page.

In 2016, a partnership with the Disc Golf Pro Tour meant Krueger and Lichti would be tasked with developing a brand new platform of their own that would bring a whole new level of live scoring and statistics to some of disc golf’s biggest events. This required the development of custom mobile apps used exclusively for entering scores and stats on the fly as well as a way for people to view them in real-time both within the standard UDisc app and on the web. 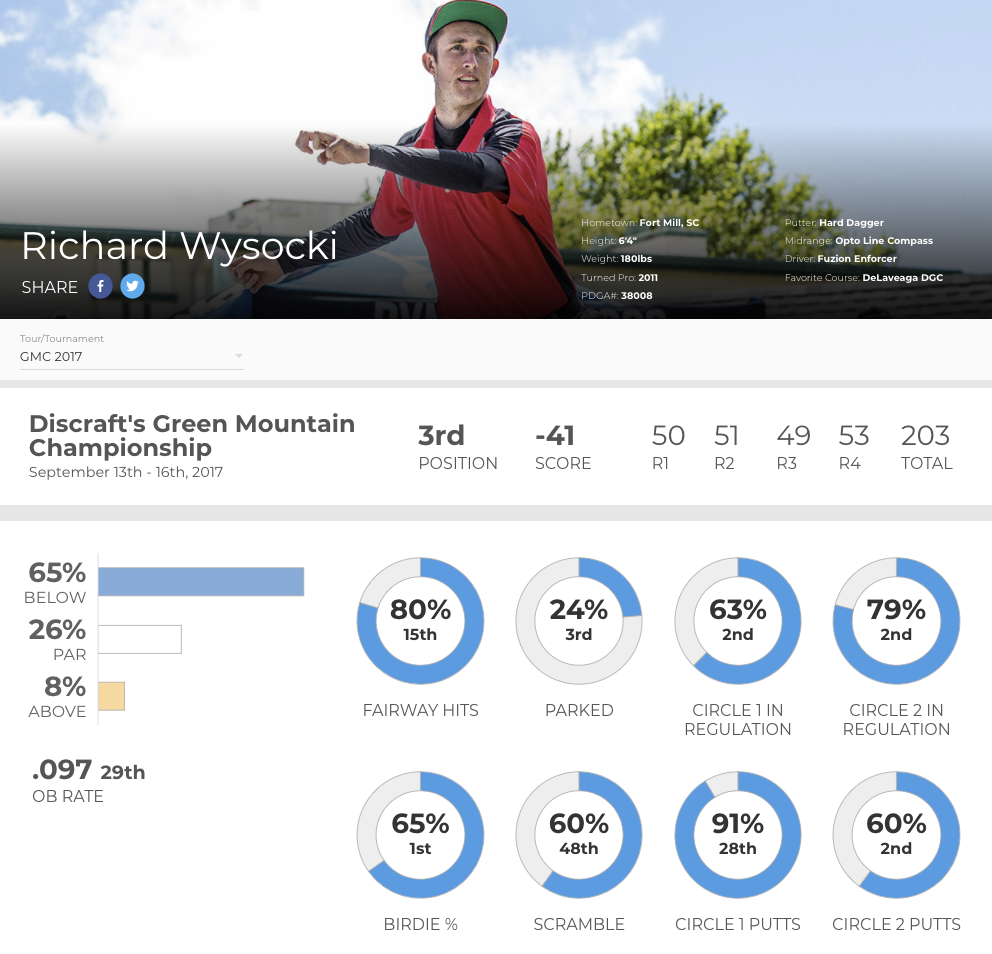 “After attending the Vibram Open in 2016 to debut UDisc Live and using all my vacation to attend tournaments, I decided it was time to find a path to work on UDisc full time,” said Krueger. “Over the next year, I sold my house, downsized my life, and quit my job in July of 2017 to make this dream a reality.”

Ganz said, “We are huge fans of Matt and Josh and the work they are doing with UDisc. It was truly a pleasure collaborating with them during the 2017 season and we look forward to building on that and providing disc golf fans with the best live scoring coverage in the sport today.”

On top of the hole-by-hole scores, UDisc Live tracks player statistics including distance, putting, scrambles, fairway hits, and much more - check out udisclive.com/about for an explanation of the scores and stats you’ll see during the 2018 National Tour and the 2018 Pro Worlds!

I used to LOVE this app, but have since deleted it and will probably never return to it. The guys at Udisc "fixed" something that wasn't broken to begin with when their last major update changed the look of the UI. It used to have a easily visible look. Now everything is bleached and hard to read. The visuals should have been left alone, while concentrating on repairing the often broken throw distance tracker and flyby options.