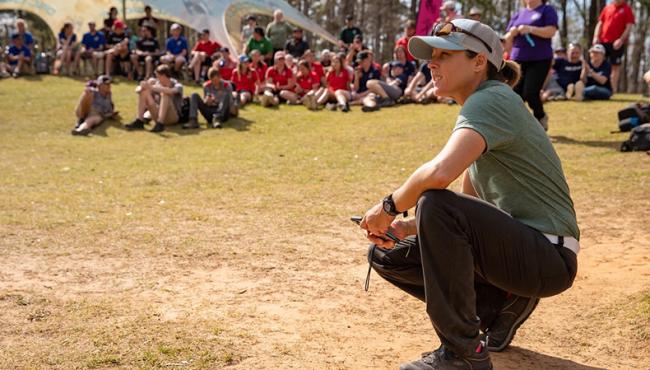 In this series, we’re taking a look at disc golf women across the country and around the world who run leagues, tournaments, clubs, and more. These powerhouse influencers will walk you through their challenges, struggles, and successes – and prepare you for your own.

Growing up, a younger Sara Nicholson would spend hours fighting to beat the high score on whatever game her family was playing that week. But when she would wake up the next morning, she’d find that her mom had played through the night to beat her score.

It was in this environment that Nicholson’s love of competition was born.

Throw Pink, the organization Nicholson co-founded and still runs, pushes to get as many women as possible playing disc golf. While growing the sport is the primary goal, Throw Pink is also focused on helping players fundraise for female-focused charities. Since its inception in 2013, the organization has raised over $52,000 and brought out more than1,700 participants.

Nicholson is no stranger to this kind of work and the drive to give. Before she began a career in disc golf – she was the PDGA memberships manager from 2011-2015 before moving on to her position as the sponsorships and special initiatives coordinator at Innova Discs – she always took any opportunity to help others. This meant majoring in psychology, joining AmeriCorps after college, and helping raise money for charities.

“I wanted to help people and I wanted to make a difference,” Nicholson said. After she lost her mom when she was in her 20s, however, she temporarily abandoned her pursuit of this passion. It was disc golf that would later reignite that drive.

“I think disc golf is a really great outlet, mentally and physically,” she said. “The healing properties that can come into disc golf – it saves a lot of people. You can forget the day, forget everything else – you can just focus on that throw. Get out of your head and think about something else.”

Nicholson began playing at an employee course in Yellowstone National Park, where she worked for three years. She first noticed that she was hooked on disc golf when she would choose to play over going on hiking trips.

“Something clicked, and all I wanted to do was play disc golf,” she says. “I’d spend half of my paycheck on it.”

Over the next decade she would go on to help run more than 100 tournaments, many of them fundraisers. Her passion lies with the mission of Throw Pink: helping others. And she believes she shares this desire with many other women.

“Women will come out and do something if they are able to justify it by knowing it makes a difference,” Nicholson said. “Throw Pink gives them the chance to make a difference while they’re learning something new in a safe place. You come to these events and everyone’s throwing the same as you. You kind of get the bug – you get hooked.”

Nicholson also spends much of her energy fighting to improve the sport for women through the organizations she has worked for over the years, with varying levels of success.

“When your demographic only makes up roughly eight percent of the people companies are representing and marketing to, it’s hard sometimes for your voice to be heard,” Nicholson said. “The focus is very much still on the men – with all sports, really. I think it’s true with every woman working in the sports industry, the challenge of any woman in charge trying to have their voice heard.”

Nicholson said she takes strength in reading about the progression of other sports for women, such as the Ladies Professional Golf Association. She said that, although there are few that remember the pioneers of ladies’ traditional golf, those leaders were essential to growing that sport for women. The same, she said, applies to the ladies putting in effort to grow disc golf today.

“You have to be OK dedicating your life to it without anyone maybe ever knowing who you are,” she said. She added that the key to growing disc golf for women is, simply, “perseverance.”

“It just takes a bunch of people just constantly plugging away and not giving up,” Nicholson said. “The league I started in Rock Hill is casual and free. I’ve had 16 women in attendance, averaging five to eight. You say those numbers to other disc golf clubs, and they ask: ‘Why even bother?’

“Of the 40 people I might talk to about league, only one might show up,” she continued. “You have to celebrate all of the little successes. You can’t give up and you have to try different ways to get women involved.”

Sometimes doubles events work, Nicholson said, because people want to play with their significant others. Sometimes posting on the Meetup app brings women out. And sometimes simply putting up flyers in a library might be the hook.

Nicholson’s determination to never stop trying seems rooted in her competitive spirit. She is constantly pushing herself to be better, to strive for more, and to never settle for what she has done. For her disc golf efforts, this means never giving up on growing the sport for women and, consequently, making the sport – and the community it encompasses – even better.

Sara Nicholson was an obvious choice when WFDF were looking to recruit women to the male dominated Disc Golf Committee in 2017. Along with Florence Dumont (France) and Sue Summers (Australia) she represents Women's Disc Golf at a National level for the 84 WFDF members. She is also on the Women In Sport Commission for WFDF which represents all women in all disc sports and is Chaired by Caz Malone. Couldn't have a better spokesperson!