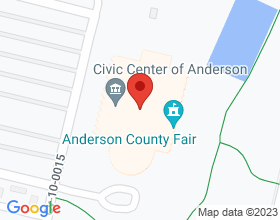 At the Anderson County Civic Center (ASEC). Park near near tennis courts at Civic Center Blvd. entrance. Cross the drive toward apartments and follow paved trail to 1st tee.

This course has no maps.

Very short course but they used the land well for what they were given to work with.

The 18 holes are on about 10-12 acres. I enjoy playing this course and would play it much more if it were closer to home. It is short enough to give my young boys a nice challenge and offers enough wooded fairways and 'splitter' trees to give more experienced players fits.

There seems to be a lot of vandalism and trash on the course when I've played...I think that is too bad. It's a very nice sports complex with lots of activities and it is close to many restaurants.

I can't see host a large event there due to how tight the holes are packed in.

Good course, but if you aren't secure with woods, you may be a little teemed to play. I just played this course and I have to say that it's an awesome course, but only has 2-3 open holes with everything else being in the woods. Some aces are possible, and birdies are a 100% likely.

This course is all Par 3. Mostly wooded holes, except one where the only >400 foot hole is. Pretty difficult fairways (skinny), some with trees slwp in the middle. This was a bit frustrating at times in that there were blocked views of the basket in many cases.

A landowner dispute (?) or something has caused #3 to be inaccesible for play, reducing the course to 17 holes. I was told it resulted from landowner's being upset with how players were leaving trash (beer cans) and the like on the course. This is an example of how we can leave a negative impression on nearby's if we do not act accordingly.

The course itself is well laid out for a par 3. Lots of legs in both directions and some straight ones. Heavily wooded, some hills and lots of obstruction to work with / around.

All in all, a nice course. Too bad about the hole being missing.