The Bar Has Been Raised

The Bar Has Been Raised 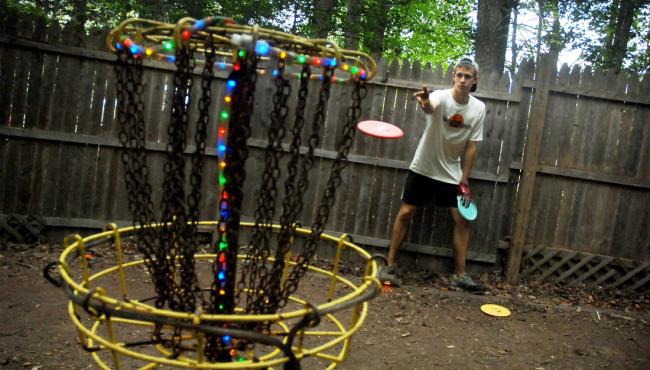 The bar has been raised, A LOT. Mike Sale had already broken the record for most disc golf holes played in 24 hours once. Since then, it was broken twice. This time he pushed himself much further than just breaking the record. He was motivated to crush the record of 1,929 holes by Dan Schnabel.

The first time Sale used his attempt to raise money for his University of California – Santa Barbara disc golf team to attend the College Disc Golf National Championships. For this attempt, there was a much more somber purpose. On the night of May 23rd, a Santa Barbara City College student went on a shooting rampage in the surrounding areas of UC-Santa Barbara's and Santa Barbara Community College's off-campus student housing in Isla Vista, CA. That night the lives of six of Mike’s classmates were taken before the shooter turned the gun on himself. In this attempt, Mike decided to raise money for the families of the victims of the Isla Vista Massacre, as well as the awareness and prevention of gun violence on school campuses in America.

Donations are still being accepted. If you wish to contribute or find out more, check out the Go Fund Me Page.

This time he broke the record at the Tiki Course at the Blockhouse Country Club in Spotsylvania, VA. The Blockhouse was the perfect setting for an event such as this, with a few key factors that made it a more ideal course than the one he played in Santa Barbara during his first record-breaking run in 2013. The course is very short, fun to play, and it contains a variety of man-made obstacles that make the course intriguing and appealing. Perhaps most importantly though, it is designed for night golf. There are lights throughout the course as well as on each basket. That made the night hours a lot more enjoyable and faster to play.

On September 12th, beginning in the early afternoon, he set off on his attempt to once again break the record for the most disc golf holes played in a 24 hour period. His goal: 2,500 holes, over 500 more than the current record.

Well, needless to say, he beat it. In fact, he broke the record in just over 14 hours. He met his goal of 2,500 in the 20th hour. At the end, after traversing 85.3 miles (That’s over three marathons!), going through three pairs of shoes and socks used, and throwing 31 different Discraft Focuses over 6,000 times, Mike Sale sank his last putt on the 2,900th hole of his long day.

Wow. What an accomplishment. Congratulations Mike!!

The following is a compilation of statistics of the record breaking attempt.

Has anyone thought to submit this to Runner's World magazine? I feel like this is something that would be up their alley and also raise awareness of disc golf to some athletes that could really fall in love with it.