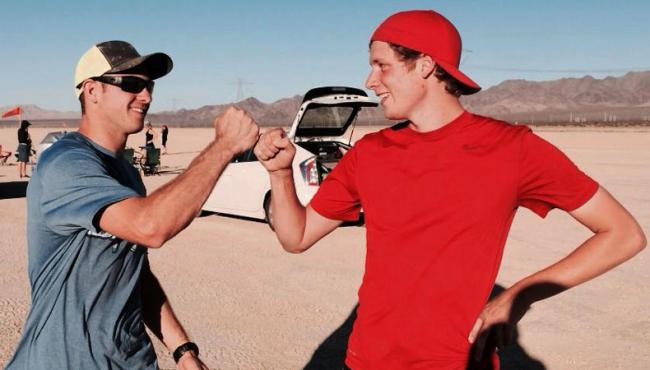 On Saturday October 25th, 2014, Germany’s rising star of disc golf, Simon Lizotte #8332, set a new world record for the longest outdoor throw of a flying disc. With a 17mph wind at his back, he crushed a 157g Innova Blizzard Boss, a gift from 2009 PDGA World Champion Avery Jenkins #7495, on a huge anyhyzer line across the flat desert land of Primm, NV. The distance that was reported back to him by radio from the spotter using an approved distance finder was an incredible 263.20 meters (863.5 feet)!

The world record holder at the time, David Wiggins Jr. #24437, was there as well and didn’t hesitate to celebrate with Lizotte after the reading came back. Wiggins broke the world record in 2012 at the age of 16 with a distance of 255 meters, ousting the longstanding record of 250 meters set by Christian Sandstrom #17004 in April of 2002.

Wiggins is still the current world record holder for distance in the Under 14 and Under 13 divisions sanctioned by the World Flying Disc Federation (WFDF), the official organization for flying disc world records. He’s probably not too worried about losing those titles, specifically his throw as a 13 year old in April 2009 that clocked in at 224 meters (734.9 feet)!

What's potentially even more mind-blowing is that Lizotte had just set a new distance world record the day before in the mini disc category. If you’ve ever tried to throw one, you know just how difficult it can be. In fact, until 2014, the WFDF records table shows that no one had thrown farther than 82.5 meters (270.7 feet) in an official distance competition since January of 2003. Lizotte’s mini disc world record throw….160.9 meters (527.9 feet). It’s a feat for many that is simply unimaginable.

In an interview with Jake Slater #62109 from TheHyze.com, Lizotte retells the story.

“When I heard there will be a mini disc competition I thought I wouldn’t even try. I thought the chances of hurting myself are higher than throwing a world record. I did about 10 test throws and I thought to myself, “Wow, I can throw these pretty well!” So, Wiggins actually went on to throw first and crushed one to 140 meters. I watched that throw and couldn’t believe it. I didn’t think I had a chance to beat that one. I stepped up next and my first throw just ended up as a “perfect” throw. The mini came out with such speed and flipped to just the right angle. I threw it 160 meters. That left most people watching, including myself speechless. This was in calm conditions so the wind didn’t have to do anything with the flight. Having that crazy record obviously motivated me even more to achieve my goals on braking the “real” record!”

This excerpt and much more can be read on TheHyze.com’s full interview with Simon Lizotte.

For nearly a decade, Christian Sandstrom’s world record huck of 250 meters, thrown with an Innova DX Valkyrie, seemed unreachable. With every year that passed since he set the record in 2002, more and more super high-speed discs were being produced by disc manufacturers. The fact that the record was held for so long by a disc with a rating much slower than many of the newer discs on the market is solid evidence that the disc itself plays a small role in what it takes to reach these seemingly impossible distances.

But, there is certainly something to be said about how technology and innovation in the world of disc manufacturing has been steadily boosting these distance records over the past 45 years. Alterations in the shape of the rims and flight plates, the sharpness of the edges, and the materials used to for the molds among other things have played a significant role in adding distance, grip, and stability.

The first record, set by PDGA member #2, Victor Malafronte with a Wham-O Professional Model was 84.1 meters. A few years later in 1974, the new CPI All Star helped Malafronte and Dave Johnson push the records to well beyond the 100 meter barrier. Wham-O purchased CPI and continued to innovate using what they had learned from CPI's design. The distance records were pushed farther and farther by discs like the Wham-O Fastback, Midnight Flyer, and Midnight Sun. The last distance record with a Wham-O disc was set in 1983 by Morten Sandorff of Denmark, measuring in at 166.42 meters. 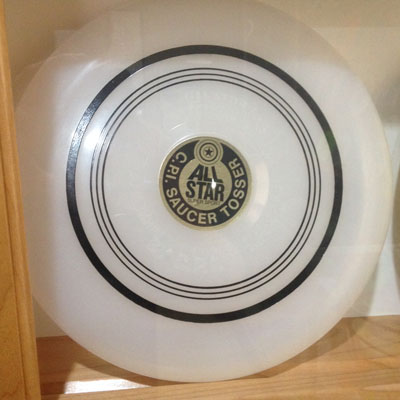 Photo of a CPI All Star in a case at the "Steady" Ed Headrick Memorial Museum in the International Disc Golf Center.

The race for the 200 meter mark was on, and in the mean time new companies like Innova Champion Discs, Discraft, and Lightning had been born. Two decades  after Malafronte set the original distance record in 1970 at 84 meters, the Innova Viper was being thrown 190+ meters. That's what 20 years of innovation can do for something as seemingly simple as a disc. Scott Stokely #3140 was the first to break the 200 meter mark, throwing a Discraft X Clone in 1995 and then again in 1998 with a Discraft XL, measuring in at 211.32 meters (693.3 feet).

Dave Johnson, the first person to throw over 400 feet, details the early days of distance competitions in this YouTube video from Rob McLeod #49897.

And here we are today, with another twenty years of progress. It’s no surprise that the more recent distance records across several divisions have been thrown with new, innovative, and technologically advanced discs. Both Lizotte and Wiggins were able to break Sandstrom’s record due in part to the creative efforts of those involved in disc manufacturing. Wiggins was the first to do so with a 139g Innova Blizzard Boss in 2012 and Lizotte did much of the same two weeks ago with a 157g version of the same disc.

The lightweight plastic combined with the ultra-fast speed of a wide-rimmed long-range driver certainly gave them an edge, but it really comes down to the fact that these guys dedicate their lives to a flying disc sport, specifically disc golf. The natural talent that they have combined with disciplined practice of their craft is what will always set them apart, and what will set apart the future world record holders.

Will anyone ever break Lizotte’s record or his mini disc record? Probably. It might be even him. Whoever does, or simply attempts to, will have an extremely difficult task to accomplish. There’s only so much that a disc can do to help.

Think you have what it takes to be a world record holder? Check out the flying disc world records and much more on the official World Flying Disc Federation’s website.

this article is great. Thank you for spending so much time putting it together.

I thought Father Dave Tayloe had the toe-throw record?