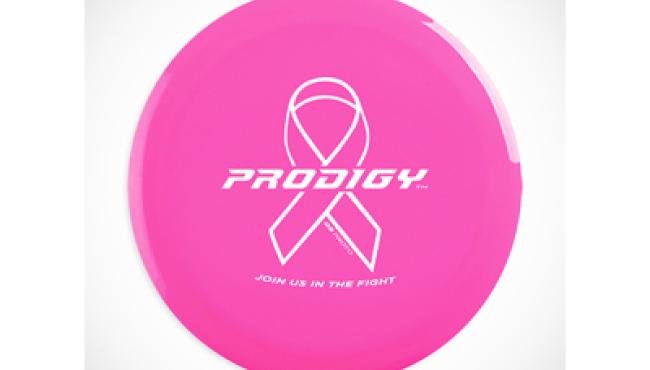 October is Breast Cancer Awareness Month and Prodigy Disc is proud to partner with the PDGA in a fundraising effort to help fight this dreaded disease that affects the lives of so many.

In 2013, there were approximately 232,000 new cases of breast cancer and almost 40,000 deaths. The chance of a woman having breast cancer in her life is about one in eight.  Breast cancer is treatable when detected early.  The best method of detection is through self-exams. Awareness through education and promotions is the key to more women learning how and why to do self-exams.

Women’s disc golf memberships has increased 35 percent over the last five years, from 867 active women PDGA memberse in 2007 to the current 1330 members today.  Even though women make up eight percent of the total active members, they are still a significant voice in the disc golf community.  More women are playing in tournaments, running tournaments, and starting women-only clubs than ever before.  Now the PDGA and Prodigy Disc will join thousands of women in the fight against breast cancer.

The PDGA has pledged two dollars for every woman who plays in a sanctioned PDGA event during the entire month of October. Prodigy, through the sale of a special edition pink disc, will match the PDGA’s pledge-dollar for dollar.

This fundraising effort will be a great opportunity to get new women to play in a PDGA event, and to raise money for a noble cause. Every woman and every dollar counts in the fight against breast cancer so please buy a disc and sign up for an event now!

For information on how you or your company would like to be a part of this fundraising effort please contact the PDGA Women's Committee at [email protected].