Carol Quinn is at the helm of the Virginia Women's Disc Golf Series, but it thrives off of community support. Photo: Scott Nichols

In this series, we’ll be taking a look at women’s disc golfers around the world who run leagues, tournaments, clubs, and more. These powerhouse ladies will walk you through their challenges, struggles, and successes—and prepare you for your own. If you would like us to feature a standout woman in your community, share your stories with us at [email protected].

Tammy is practice putting, Devon is warming up her drives, and Sherry is helping distribute player packs. Forty familiar, friendly female faces surround you. It is the hardest part about showing up to one of Carol Quinn’s Virginia Women’s Disc Golf Series stops: managing to say hi to everyone you know.

A strong sense of community is one of the best aspects of disc golf. With her series, Quinn has not only captured that feeling for female disc golfers but has amplified and expanded on it. The sense of belonging begins the second you arrive and lingers for days afterwards.

The series is comprised of six women’s tournaments spread out from Richmond to Winchester, Virginia, with a bonus seventh stop in Gaithersburg, Maryland. Local clubs host each of the events, allowing Quinn to utilize their expertise to help choose layouts and their influence to drive support.

It was three years ago that the idea of running the series began to take shape. Quinn had attended a few of Innova teammate Erin Oakley’s Michigan Women’s Series tournaments years before, and the experience had stuck with her.

“The female events and larger divisions I had played in were so exciting and fun,” Quinn explained. “I thought it might be another avenue for us ladies to encourage each other and help grow the sport in Virginia.

“I talked with Erin regarding all of the pros and cons. She encouraged me every step of the way and was there for any question I had—and still have,” Quinn continued. “She is a true inspiration.”

The next step for Quinn was to approach Virginia state coordinator Bob Cannon and local clubs, first to feel out their level of support, and then to ask for their help implementing it and hosting her events. She was met with unwavering support that allowed her to move forward with the idea.

Even with communities near and far behind her, Quinn said the road hasn’t always been easy.

“I will not lie and say I have never doubted what I’m doing,” she said. “Many volunteers or people that have so much passion for something wear their heart on their sleeve as I do.” She views the struggles she has faced as learning curves, admitting to long-winded players meetings that she’s learned to “tone down.”

“I think it’s just practice—event after event that has made this series run smoothly and has helped it get better each year,” she said.

It’s clear, though, that her success far outweighs any difficulties she has had along the way. When asked for just one moment that has stood out, Quinn couldn’t choose. The smiles; the new faces; the professional women helping the amateurs to grow are all recurring moments that give her the encouragement needed to keep going. 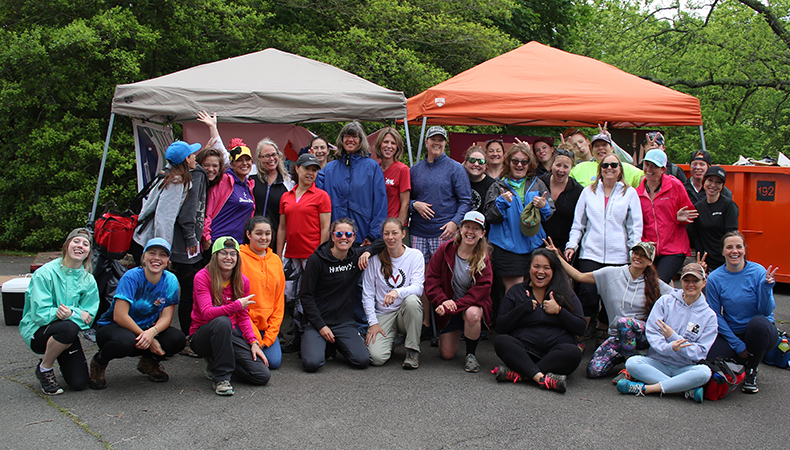 One standout memory, she said, came that very first year during payouts at one of the events. Every amateur gets paid out credits, and each lady is then able to use those credits to shop the available merchandise and choose which discs, towels, or other merchandise that they want to take home. Two new players who had just started playing disc golf a few months prior took home their loot and kept returning for events. At a tournament a couple months later, Quinn saw the same pair purchase bags and then use their credits to fill them with discs.

“I asked them if they were they changing up their bags,” Quinn said. “They said no, they have friends they want to introduce to the game and they are making them starter bags. That was the highlight for me, because that is exactly what it takes to get more women involved.”

Quinn’s series is filled with these moments, moments that may seem small but create a ripple effect and build a strong community that wasn’t there before.

The help she has received along the way, she says, is essential to this. “It’s a team effort,” Quinn said. Local clubs contribute by fundraising and supplying fun, free incentives, from candles to taco lunches. Men’s players contribute by taking photos, caddying, or helping behind the scenes. Local ladies, too, are part of the backbone to Quinn’s efforts, doing everything from helping unload her car to handling payouts.

Quinn encourages others to get out there and take a chance.

“What I would say to other women aspiring to run events is run with your passion,” Quinn said. “Reach out to women who have experience running events if you have questions or need any advice. Not one person I have ever contacted has ever turned me down for advice.”

It may be a lot of hard work, practice, and trial and error, but Quinn says it’s worth it.

“It just takes one thank you,” she said, “to know this series was launched for the right reason.”