Decade on Display: The Albatross

Decade on Display: The Albatross 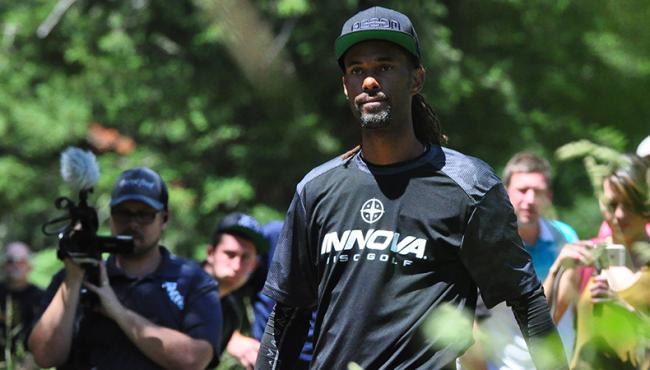 Professional baseball has the Shot Heard ‘Round the World, Bobby Thomson’s game-winning home run that vaulted the New York Giants to the 1951 National League pennant. Football boasts several variations on iconic plays -- the Immaculate Reception, The Catch, David Tyree’s circus act where he balanced the ball on his helmet in Super Bowl XLII -- as does every other mainstream sport.

With roughly 450 feet between him and the basket on the 850-foot, par-5 6th at Milo McIver State Park’s West course during round three of the Beaver State Fling, Southern California native and veteran touring pro Philo Brathwaite simply wanted to get around the corner with his second throw and maybe have a look for eagle as he tried to keep pace with Ricky Wysocki. With a stable Innova Destroyer in his hand, he needed some magic on a shot he’d struggled throughout his career to execute.

“The target wasn’t really in my peripheral at the moment,” Brathwaite recalled last week as he traveled to Chicago for the holidays. “I just remember I was in a really heated battle with Rick and those guys up at the top of the leaderboard, and Rick was starting to pull away earlier that round.

“I remember I’ve thrown this shot so many times before,” Brathwaite continued “...My intentions most of the time were to make a 4 on that hole, because I’d never pulled that shot off to make it flex back.”

This time, it did flex back. But instead of dropping to the earth to give him a chance at the eagle, it crashed the lower left side of the chainset, then ricocheted off the backside of the basket and stayed in for an albatross.

The shot was blind, though, and several other players on his card still needed to play their approaches up the long fairway. So Brathwaite didn’t even get a visual confirmation for more than 10 minutes. Instead, he got word of the feat from Central Coast Disc Golf’s Ian Anderson, whose crew was filming the round and had caught the throw in all of its glory.

“Ian was standing right behind me, and after he filmed my shot, you know, it disappeared around the corner and he shuffled up to Ricky to go capture his shot,” Brathwaite said. “He turned around back at me with a big smile on his face.”

“I remember Alex Olguin shooting me that message in our Facebook chat that someone just made it in, and getting to be the one to tell Philo,” Anderson said. “Alex and the card he was filming thought it was a really long putt. The rest is pretty much a blur.”

But the ride was already out of the station, and it was about to move fast. Anderson uploaded the video of the throw to Central Coast’s YouTube channel, and it quickly went viral. In addition to more than a million online views, it was featured on ESPN, several nightly news channels, an SB Nation meme and, eventually, a show on the Science Channel called Outrageous Acts of Science.

“It was the first time a disc golf moment or video went viral,” Anderson said. “ It was literally everywhere.”

Its mainstream impact, meanwhile, is still a mystery to Brathwaite. He’s not sure exactly what made it break through, suggesting it was a “perfect storm” of elements: the technicality of shot; his standing as one of the only people of color touring full time; maybe even a slow day at ESPN. But regardless of the why, he still feels the afterglow today.

“The timing of it all, and to see all the messages months down the road -- to have people say ‘That’s the video that got me into disc golf’...All those comments humbled me in a lot of ways, and it made me really proud to be a part of that.”

Brathwaite ended up finishing in second place at the tournament. But more importantly, he etched his name in disc golf lore. For a lifelong player who got into the sport wishing to leave it better than he found it, it’s all he could have hoped for.

“It was really special for me, man,” Brathwaite said. “I didn’t know how I would be leaving my mark on this game. I knew when I got in this game my intentions were to be the best competitor I could be and hopefully win some big tournaments and write my name in the history books as a Major winner...Obviously, a 10-year career had surpassed by the time the albatross had dropped and I hadn’t really done anything to put myself on that level.

“I just knew in my heart eventually something would happen. I didn’t know it would be an albatross,” Brathwaite continued. “I figured one of these days I’ll figure it out, win a [PDGA] National Tour [event], get that monkey off my back. Turns out it only took one shot, not a whole tournament...That’s gonna last in peoples’ minds for decades, you know?

“I don’t see the amazement of that shot wearing off anytime soon.”