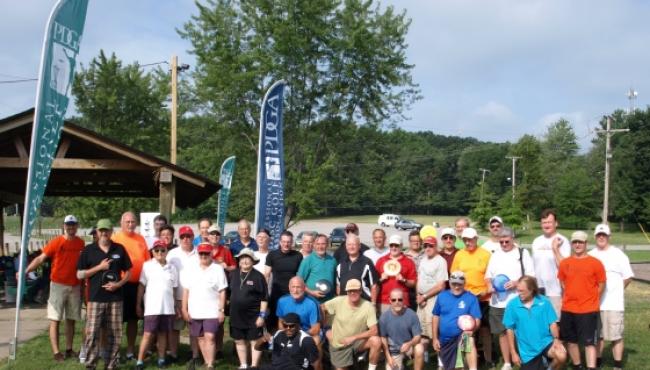 The 2013 National Senior Games opened this past Friday in the city of Rock and Roll where Mother Nature did some serious rocking and rolling of her own.  Her opening act was a downpour on Friday night while the Opening Ceremonies commenced at the Cleveland Convention Center.  The ceremonies included the lighting of the National Senior Games flame.   But later that night, in the wee early hours of Saturday morning, the heavy metal headliner took the stage as a massive storm front made its way through the region and dumped 4+inches of rain on the Sims Park Disc Golf Course while spawning a tornado that damaged buildings at Ursuline College in Pepper Pike, a mere 11 miles away.

Having seen enough rain in recent weeks to already have thoroughly saturated grounds, Sims Park in Euclid, a suburb to the East of Cleveland, didn’t stand a chance of being able to drain off the onslaught  of rain and as morning dawned on the course, some of the holes had water reaching as high as the chains of the targets.  Although not planned to be played until Sunday, organizers realized that there was no way the course would be playable (or at least enjoyable) for the Senior Game participants by then, so all rounds were then scheduled to be played at the original Saturday-only venue, Veterans Memorial Park in Parma, a suburb to the West of the city.  Even so, Mother Nature was still a factor as she continued to rock the area with a huge number of lightning strikes as a new front rolled through during the early morning hours.

Finally, the front moved off to the Southeast and the first round was able to start at 10:30am, only 30 minutes later than originally scheduled.  For the second round the sun actually peeked out through the clouds a few times.  Sunday was a beautiful mostly sunny day with no weather issues at all.  In previous weeks the Cleveland area had been quite hot, so temperatures in the low 80s for the disc golf rounds was quite enjoyable despite fairly high humidity.

The ladies divisions, and each men’s divisions of 70 years of age or older,  played 18 holes per day while all other divisions played two rounds of 18 (36 holes) each day.  The Veterans Park course played just over 5000 ft. for the first round and just under 5000 ft. for subsequent rounds.    The course is heavily wooded with some considerable elevation changes so it presented a good challenge to the competitors.

In order to participate in the Senior Games athletes must be at least 50 years of age and are placed into divisions based on five year increments.  The oldest competitor at the Disc Golf venue was Olive Bollander of New Mexico who played in the Female 85+ division.  Olive is pictured below approaching the basket on Hole 18 while her daughter, Susan Leslie who played in the Ladies 60+ division, watches and cheers her on. 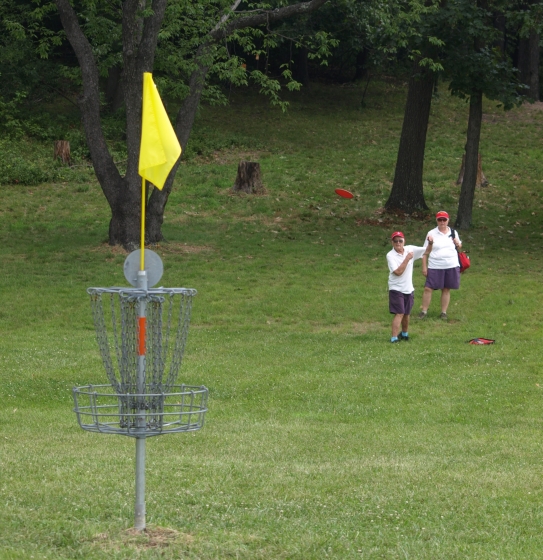 In all, the two days of toil on the course produced eight National Senior Games Gold Medalists.  The chart below shows all the medalists:

Many thanks are due to Bill Griffith, PDGA Senior Committee chairman, for all of his hard work over the past six months to make disc golf a reality in the National Senior Games.   Thanks also to the Parma Disc Golf Club and Euclid Disc Golf Club who made sure the courses were manicured for the players.  And a big shout-out to the on-site volunteer staff who gave their time and energy to make Bill’s TD job easier while making sure the players had a great experience - Mike Broda, PK Deaner, Eric Wernet, and Sharon Jenkins.

Along with the Senior Games participants, there were also a few participants who played in a concurrent PDGA-only event using standard PDGA divisions.  Click here for the full results including both sets of players.

Click here for more photos from the 2013 National Senior Games.

Anyone interested in serving on the PDGA Senior Committee, or helping to promote Disc Golf in the Senior Games in their state, should contact Bill Griffith via the Committee Drop-down list on the PDGA Contact page.