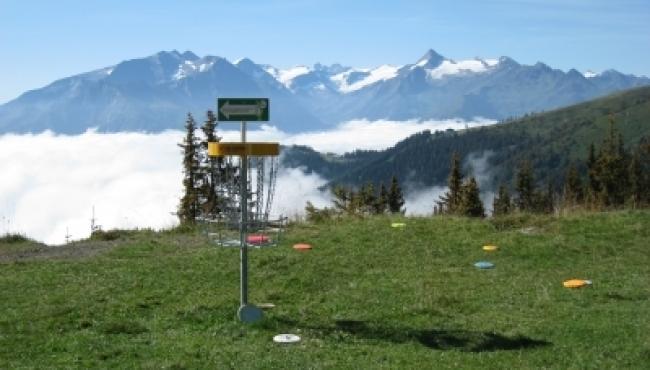 A Milestone for Disc Golf!
by Michl Priester #34623 (Introduced by Dan “Stork” Roddick #3)

Just recently, Cliff Towne, keeper of the PDGA Course Directory, reported that he had registered the 3,000th disc golf course. This was particularly exciting because the course, which is the Schmitten Discgolf Parcours, is the first to be registered in Austria.

To put this milestone into some perspective, do remember that the first permanent disc golf course in the world, at Oak Grove Park in Pasadena, California, was established by Ed Headrick and Wham-O in 1974. Disc golf had been played for a good many years at tournaments prior to 1974, but this was the first permanent installation. So… it’s been 35 years from the first to the 3,000th course. That may seem a long time to you, especially if you’re under twenty. But, if we take a look at our much older cousin, ball golf, we see an interesting comparison of development. The first mention of golf was way back in 1452 when King James (not of Cleveland... King James II of Scotland) banned the playing of golf because it was cutting into time spent on archery practice. So, we know the game was being played informally for many, many years before the Society of St. Andrews Golfers got it together to form the first club in 1754, which would later become the Royal and Ancient.  It’s hard to find a good timeline of global ball golf course development, but we do know that the 3,000th course did not get built in the U.S. until 1916. So, it took the grand old game roughly 450 years from inception to 3,000 courses. Or, more realistically, 162 years from the first club to that point of development. Given that, our 35 years is pretty darn impressive. We got traction on this game very quickly. Now, do remember that ball golf has continued to grow and now boasts over 31,000 courses worldwide, with about 17,000 of them in the U.S. It’s also estimated that there are about 50 million ball golfers on the planet… and of course there’s been one on the moon.

But, back to our 3,000th course, which is special in several ways. For one, because it’s the first registered course in Austria, it’s emblematic of the global burst of interest that has hit disc golf.

To take a look at the details on this historic new course, you can go to this link:

In going to that link, you’ll also be taking a look at the new format of the online PDGA directory. Notice that you can now add reviews of all listed courses. We think this will add lots of interest to the course listing. To see how to log in to add photos and a map or do a review go to:

Now’s the time to make some travel plans to play this new course. Michl Priester of Austria provided us with some great background on the area and the course. As you’ll see, it’s what Cliff Towne likes to refer to as an “adventure course.” That is, one that is an adventure to visit and to play. Michl explains:

The course is located at the city of "Zell am See" in Austria, Europe. The owner of the course is the "Schmittenhoehe Bergbahnen AG" - the company who runs the chair and gondola lifts on the mountain. In winter they have 27 ski and cable lifts running together with 77km of ski slopes, in summer there are five of the lifts active (two car tramways, two gondola lifts and one triple chair lift). A main attraction of the area in summer is hiking. In fact, a lot of sheikhs are there for holidays because they love the combination of high mountains and sometimes rain. (Stork Note: Maybe this will be the connection for an explosion of multi-million dollar courses in the Arab world!)

The "Schmitten" (the name of the mountain in the heart of the Austrian Alps) offers numerous marked hiking paths for all levels ability as well as friendly mountain huts and restaurants plus one of the biggest art exhibitions in Europe featuring 28 oversize wood sculptures. More Info: www.schmitten.at/en/

Other summer attractions include the Lake Cruises on the Lake of Zell and excellent paragliding.

In aviation circles, the Pinzgau is renowned as one of the best long-range flight areas around. Close to the summit terminus of the Schmittenhöhe lift, pilots will find ample space to assemble their equipment and prepare for the upcoming flight. Take-off is from open meadows and is possible in all directions. And, everyone feels right at home on the Schmitten, and not just the pros.  Experienced tandem pilots passenger those who are curious about paragliding on an unforgettable flight to the valley below.

As you can see - it's the perfect area to spend some days or a complete holiday with the whole family. Next big city is Salzburg about one hour away by car. Salzburg's "Old Town" (Altstadt) with its world famous baroque architecture is one of the best-preserved city centers north of the Alps, and was listed as a UNESCO World Heritage Site in 1997. The city is noted for its Alpine setting. It is the birthplace of Wolfgang Amadeus Mozart the world famous composer of the classical era, and the setting for parts of the musical and film The Sound of Music, which features famous landmarks in Austria, but focuses mainly on Salzburg. Salzburg is a student city, with three universities.

OK - now some details about The Course:

The idea about a disc golf course was born in June 2009. Barbara Hainisch (Marketing Schmittenhoehebahn) contacted the Austrian Discgolf Association (www.discgolf.at) for help in course design and building the course. Werner Mooshammer and Michl Priester finished the course design within three weeks from the first contact. The choice of the 20 baskets (18 holes and two baskets for practice and warm up areas) was Discmania Discatcher, the tees are rubber pads that provide great grip in every weather condition. It took six weeks from the first meeting to set up the whole course. Two weeks later was the official opening with a small tournament - the "Schmitten Open 2009." In July, 2010, a big international tournament (PDGA EuroChallenge Tour) over two days will take place and it will be organized by the Austrian Discgolf Association.

To reach the course you have go uphill with the "Sonnalmbahn." Up there you find the first of two warm up and practicing areas with one basket. To reach tee #1 you have to go upwards again using the triple chair lift "Sonnkogelbahn." There - 1850 meters above sea level, you’ll find a second basket installed for warming up and practicing. You’re now about to play Europe’s highest disc golf course!

The panorama at nearly every point at the course is unique and breathtaking. You can see the tops of Austria's highest mountains and enjoy nature at its best!

The main idea of the course design was to create a course that's interesting for beginners AND experienced players. 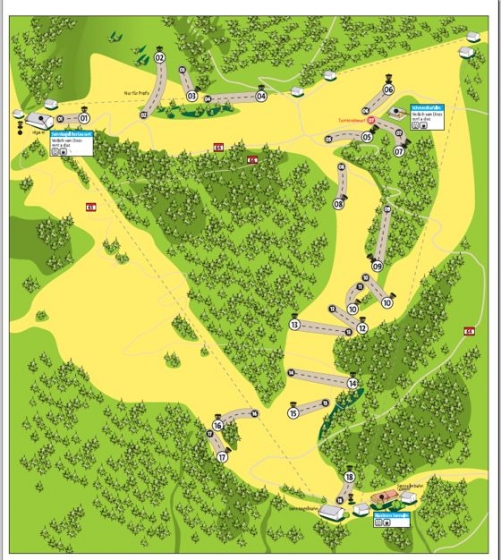 Hole 1 starts at 1850 meter above sea level and is a straight and short hole that goes slightly downhill to a small island. Beginners ignore the island, experienced player have to aim  carefully to hit the island and avoid OB penalties right at the start. 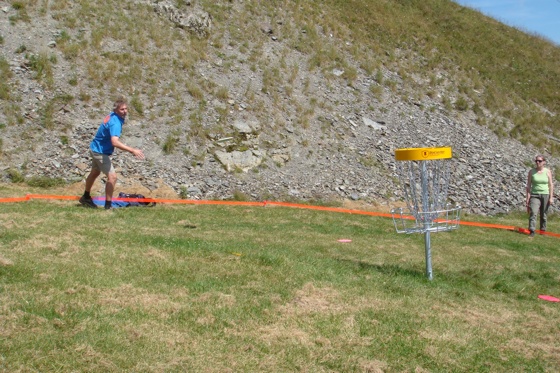 Hole 2 is for experienced players only. It has a vertical drop of more than 50 meters and is 155 meters long. The terrain is very rough, but if you watch your putter after the release going to the basket you will love that unique hole. Constant headwinds endanger the discs to leave the line and break to the right, which is not good because then it will fly forever - downhill until you lose sight of the disc!

Hole 3 is pretty easy; an obligatory birdie for those who want to attack the actual round record of 55 throws by Bernd Wender, #8673. The hole then guides you back from the rough terrain to a t-bar lift line.

Hole 4 is challenging again - downhill a t-bar lift line through a mandatory ski lift pillar. This is also a chance to lose the disc on the left side of the line, down in a wooded valley. The hole is 135 meters long and with vertical drop of about 30 meters. 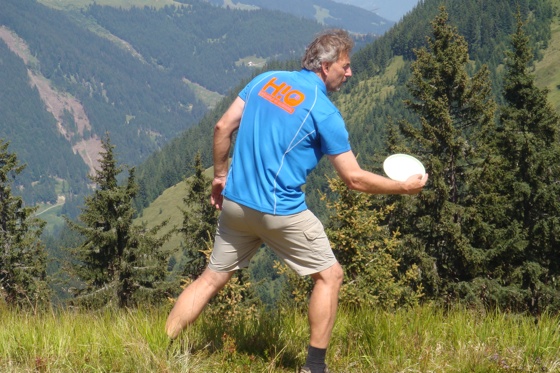 Holes 5 through 7 weave around a mountain hut with a restaurant and are short and easy par 3s. Two of them are uphill shots. 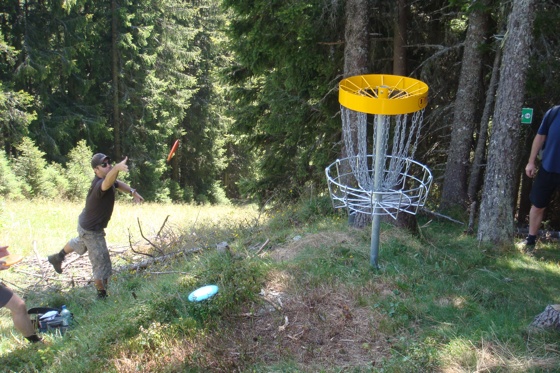 Hole 8  is downhill again and you have to play a strong curve to the right. 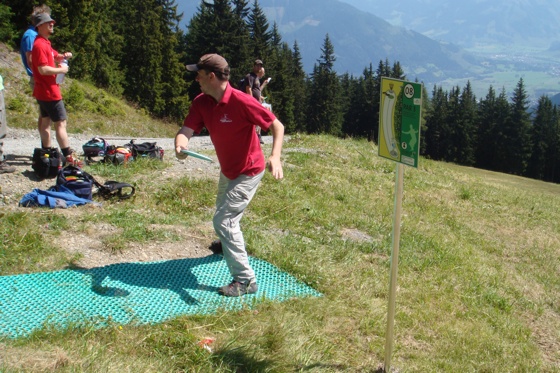 Hole 9 is the first par 4, which runs straight downhill on a former ski lift line. Deep woods on both sides make of the the fairway only about 8 to 10 meters wide. The basket is 145 meters away with a vertical drop of 51 meters. 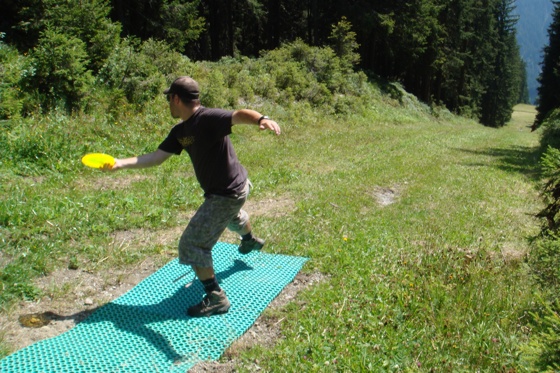 Holes 13 and 14 are for the long throwers, going across the ski slope. 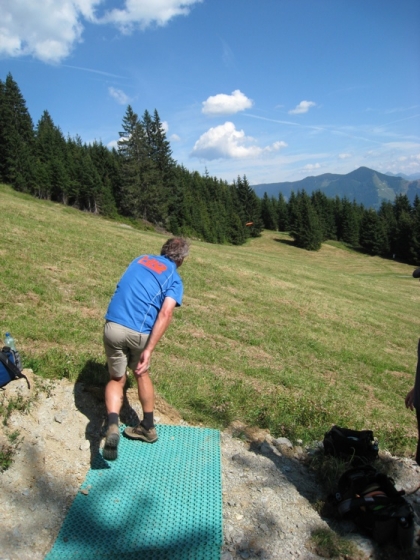 Hole 18.  Save some strength for this one. It’s 70 meters long and 23 meters uphill. You’ll need a powerful drive to score a 3 on this one.

After finishing the round you've got two possibilities: Going upwards again with the chair lift and play one more round, or refresh with a cold drink and some excellent food at the "Sonnalm" restaurant.

To finish the day of discgolf go down to valley with the Sonnalmbahn and enjoy the nightlife of Zell am See. Special tip: the "Dorffest" - a festival at downtown Zell am See that happens every Wednesday evening with tons of excellent food, tasty drinks and great live music performances!

The disc golf season for the Schmitten Discgolf Parcours is only from beginning of June to end of September. The rest of the year it's skiing season. exact details about the dates of opening and closing of the course can be found on www.schmitten.at/en/ 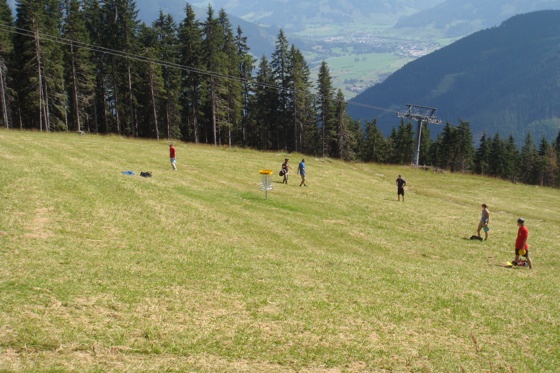 Only a few days after reporting this milestone, Cliff recorded the 3,004th course and it was from yet another new disc golf country, Russia. www.pdga.com/course_directory/course/dunes

It sounds like an around-the-world disc golf tour is becoming a reality. Looking forward to that 4,000th course and many new disc golfing countries. At this pace, it shouldn’t take too long.