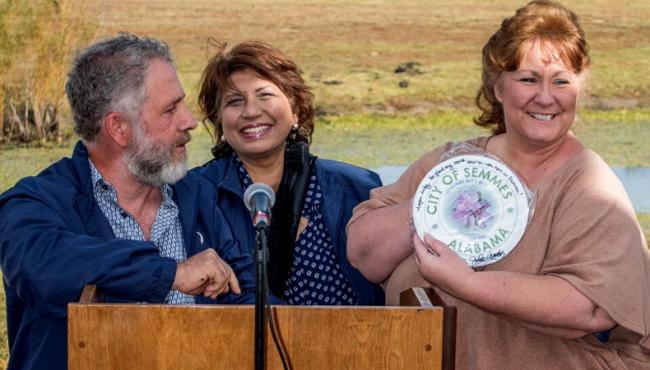 The 100th course designed solely by Disc Golf Hall of Fame member and Master Designer, John Houck #1688, was dedicated to the City of Semmes by Mayor Judith Hale on Sunday, November 6th, 2016 at Semmes Municipal Park in Alabama. John Houck offered a “sneak peek” of the disc golf course to those that wanted to be the first players to set foot on and/or play at the historic venue officially named The Admiral Disc Golf Course.

The city estimated that over 250 players from the Mobile-area and players from five other states were present to take the first drives on the freshly developed fairways that took thousands of hours and several months of hard work from the city’s 17-man Public Works crew. 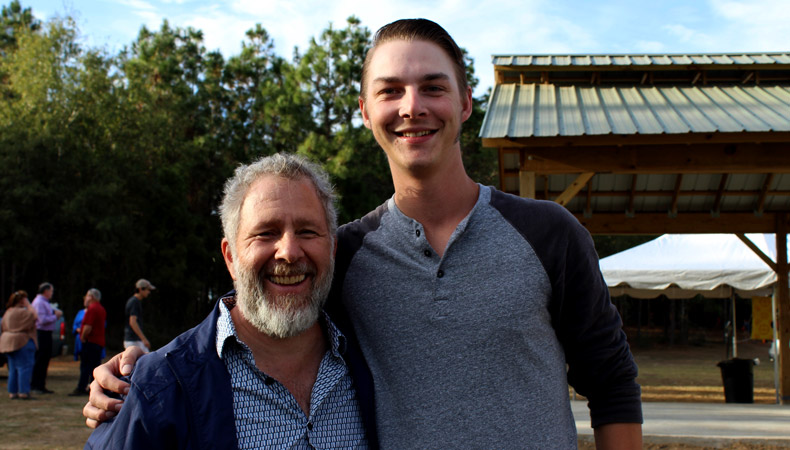 Touring professional disc golfer Cameron Colglaizer #47407 (right), pictured above with John Houck (left), was on site for the sneak peek event and has vowed to make it one of the courses he plays regularly.

At the time, Public Works Director Jason Franklin stated that the course was not fully developed and it would be closed to the public immediately after the sneak peek event to make sure it is fully ready to go for the grand opening. However, now that the original grand opening date he was referring has been pushed back by a few weeks, the course is now open for public play every Saturday. The new official grand opening date is set for January 21st, 2017, and will be celebrated with a PDGA C-Tier event!

The Admiral Disc Golf Course is a par 65 with three sets of tees to accommodate all levels of players. Mayor Judith Hale stated the city was looking forward to bringing PDGA events and to introducing the sport of disc golf into the local school districts. Semmes Economic Development Chair, Tina Davis, has added that the Semmes Chamber of Commerce is working with a local businessman to establish a disc golf retail store in Semmes as well. Davis understands that the economic impact from the HouckDesign course will be significant and she has contacted the Department of Tourism to maximize the tourism opportunities.

John Houck stated that The Admiral reminds him a lot of the course he designed for the International Disc Golf Center (IDGC) in Appling, Georgia, just outside of Augusta, where long fairways were carved out of a densely wooded county park. The course he is referring to is the W.R. Jackson Memorial Course, regarded by almost everyone that visits the IDGC as one of the most challenging and well-designed courses in the world. There are two ponds incorporated in The Admiral’s design and subtle topography changes come into play as well, making for beauty combined with complexity at every turn.

Founding members of the newly formed Semmes Disc Golf Club, Jason Weaver, Justin Dyess #82545, and Joseph Sikes #80337 were on hand for the sneak peek and are extremely excited about hosting their first PDGA-sanctioned event in January. This Grand Opening PDGA C-Tier is being sponsored by HouckDesign and Innova Champion Discs, with players receiving a full-color commemorative disc, a custom mini, lunch, and much, much more.

Now just two months away from the grand opening, spots are already filling up for the HouckDesign Circular Skies Over Semmes Grand Opening Tournament on Saturday, January 21st, 2017! If you’re wanting to compete on an amazing and historic course designed by one of the best in the game, register now on The Disc Golf Scene. For more information about the course, please send an email to the Semmes Disc Golf Club.

I was at the Dedication. Mr. Houck is one of the nicest people involved in disc golf. Ms. Dee should be in the Hall of Fame with him.

The course will be spectacular when it is finished. Looking forward to playing it many times!

Congrats to John Houck and to Semmes, Alabama on their new course. I am lucky enough to have a Houck course as my home course at Tall Firs in Monroe, WA and I know threre are a lot of very fortunate golfers in the Semmes area who are going to be able to say the same. #Houck100