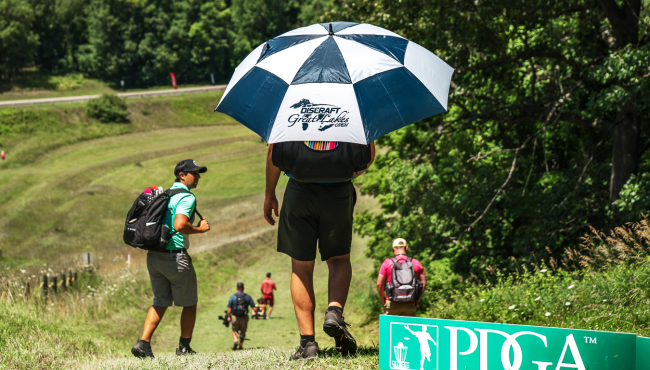 Players work to stay on the well-manicured fairways of the Toboggan DGC in Milford, MI during round one of the 2020 Discraft Great Lakes Open. Photo: DGPT, Alyssa Van Lanen

For all the talk of Paul McBeth’s perfect round at the 2018 Great Lakes Open, the famed Milford, Michigan Toboggan course showed Friday that, despite how scoreable it may be for the world’s top players, the thick Midwestern undergrowth that lines the fairways here is always a threat. Indeed, as DGN commentator – and recent Disc Golf Hall of Fame inductee – Valerie Jenkins-Doss put it, “The rough is rough.”

PDGA Tour newcomer Brodie Smith managed to avoid the Toboggan’s sting for the most part as he battled alongside his teammate and disc golf mentor, McBeth, on the opening day MPO feature card, and managed to hang alongside the five-time PDGA World Champion for 13 holes until a low putt and unfortunate rollaway on the 15th, along with a few errant shots down the stretch, slowed his momentum.

“It’s frustrating – it could have been a really good round. It really could have,” Smith told DGPT Tour Director Jeff Spring. “I felt that there were about six strokes that I just gave away. But all in-all, I was happy to make par on the 18th - it’s a tough hole, and hopefully I’ll take that into the next few rounds.”

Smith finished tied-54th with a 992-rated two-under, including an impressive 100% putting from C1X.

McBeth, for his part, appeared frustrated at times as he struggled to find his rhythm through much of the opening round. He was 3-down through 12 holes before putting together a string of five straight birdies, only to backtrack on the 18th with his only bogey of the day. He finished tied-15th with a 1033-rated 7-under.

Calvin Heimburg showed no frustration -- or much of anything else for that matter -- as he cruised to a 1082-rated 13-under to finish round one with the outright lead.

“I feel good,” Heimburg said about heading into the rest of the tournament. “If I can keep the tee shots in the fairways like I did today, I have no doubt that I’ll score well. Maybe not 13-down-well, but as long as you keep it in the fairway this course is very attackable.”

Sitting only one back of Heimburg heading into round two, last year’s runner-up Kevin Jones was on fire with the putter going 3-for-4 from Circle 2 as he began his quest for his maiden Elite Series title.

Rounding out the MPO lead card for the second day’s action will be Eagle McMahon and Ricky Wysocki, both sitting two back of the lead at 11-under. Wysocki had a chance to close out an already-excellent round with another birdie on 18 before missing his only C1x putt of the day. Nevertheless, the 2x PDGA World Champion sounded upbeat in his post-round interview.

“It was pretty smooth for me,” he said.  “I didn’t really risk any bogeys out there. I played a really clean round – threw a lot of good shots and gave myself a lot of opportunities. Hit some good putts when I needed to. It’s not good to leave a stroke on 18 with an inside the circle putt, but that’s something I can clean up tomorrow.”

On the Women’s side, five-time PDGA World Champion Paige Pierce also uncharacteristically missed a C1x putt to finish her opening round with a bogey, but nonetheless found herself in a very familiar position – pacing the field with a two-stroke cushion heading into the second day with a 985-rated 5-under.

“I left a lot out there,” she told DGN’s Terry Miller. “I ended the front nine and the back nine with a bogey – a couple of blemishes that weren’t necessary. I’m striving for a lot more tomorrow. I want a great round, not just a mediocre round.”

Another former PDGA World Champion, Catrina Allen, also had a good-but-not-great day on Friday, struggling at times with the C1x putting woes that have been plaguing her, but still managing to find herself near the top of the field thanks to a 100% scramble rate and a couple of big Circle-2 putts.

Rounding out the FPO lead card for day two will be Kona Panis and Jessica Weese, who, along with Allen, needed the benefit of their low PDGA numbers to edge out Hailey King and Missy Gannon for a spot on the top billing. All five finished with a 968-rated 3-under for round one.

You can catch round two action starting today at 2pm ET live on the Disc Golf Network. For more information on how to watch, and for scores and updates, visit our 2020 DGLO Event Page.