Six Things to Know Before Your First PDGA Tournament

Six Things to Know Before Your First PDGA Tournament 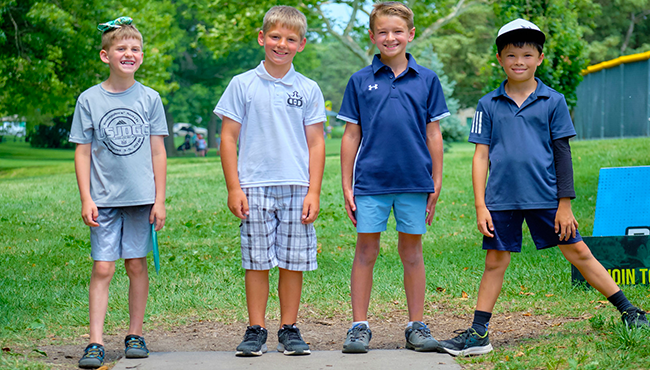 Can I throw an extra shot for fun? What's the deal with the mini discs? My drive is under the basket, should I just pick it up and tap the chains?

PDGA tournament or league play can have some differences from the casual rounds you might be used to throwing.

Luckily, all you need to have a successful first event is to know a few basic things. As you play more tournaments – or even run some events of your own – you’ll quickly become well-versed in the PDGA Official Rules of Disc Golf (which you should read up on before your tournament, along with the Competition Manual).

Here are six more quick things to know before your first tournament:

One of the most important rules in disc golf is where you can – and can’t – put your feet. When you tee off, at least one foot (well, supporting point of contact, but let’s keep it simple for now and say it’s a foot) needs to be touching the teepad when you release the disc, and you can’t have any supporting point (arm, leg, head, etc) touching anything else. 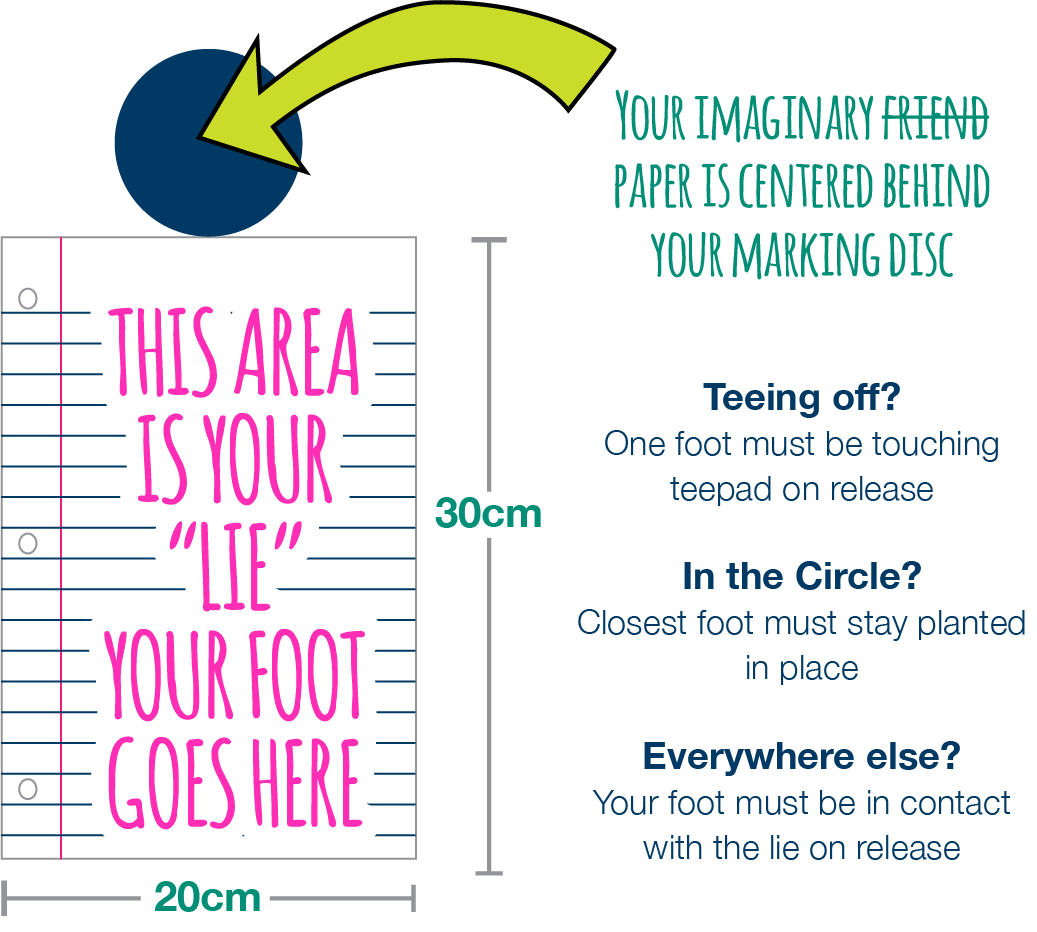 When you throw after teeing off, the rule is the same, except instead of the teepad, you need to be in contact with the lie. Think of the lie like a sheet of standard paper centered on an imaginary line drawn between the basket and your disc, that sits directly behind your disc. Finally, when you are putting and you’re “inside the circle” (meaning closer than 10 meters - a little under 33 feet) to the basket - your feet need to stay on or behind the lie the whole time.

We’ve all done it. You parked the basket and you don’t even need to putt. You pick up your disc and slap it against the chains for that rewarding crash of metal, ringing out your victory. 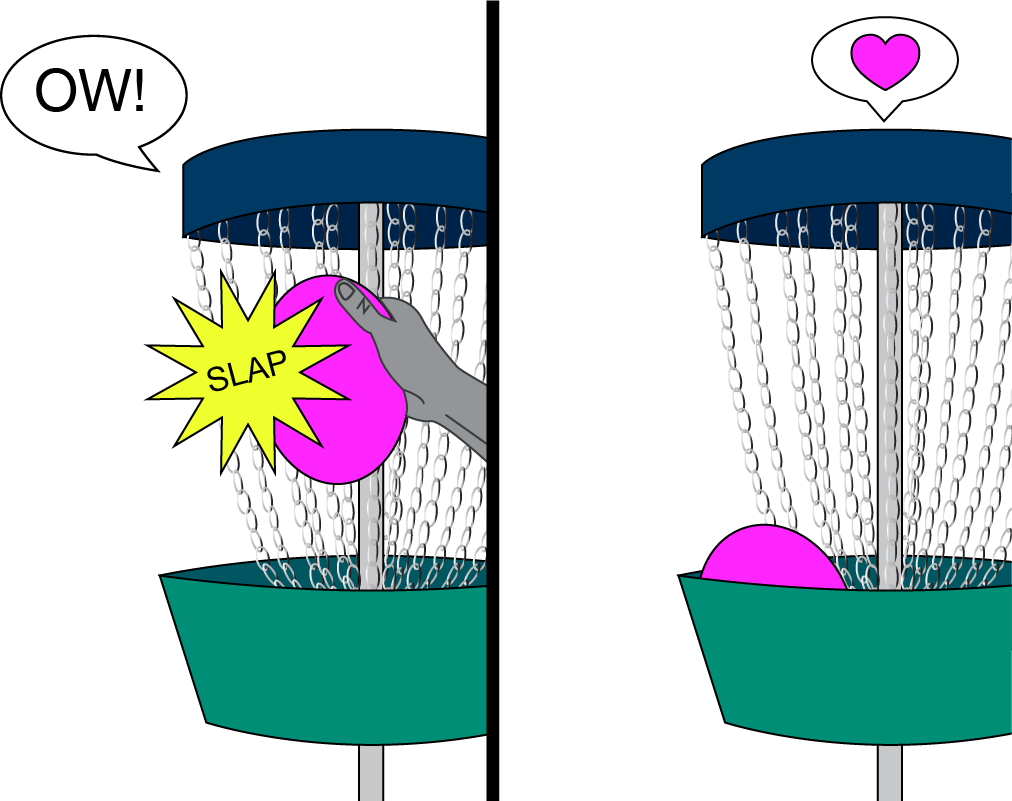 That’s great for a casual round, but at a PDGA event, you have to complete the hole. That means your disc has to come to rest in the basket (although sometimes what that means can be interesting).

Tournament etiquette is simple. You just need a bit of common sense.

Don’t throw when another group is on the hole, and don’t ask to play through in a tournament. Make sure you watch the throws of everyone in your group in case you need to make a rules call or find a disc. Don’t distract other players by talking or moving in their field of vision. 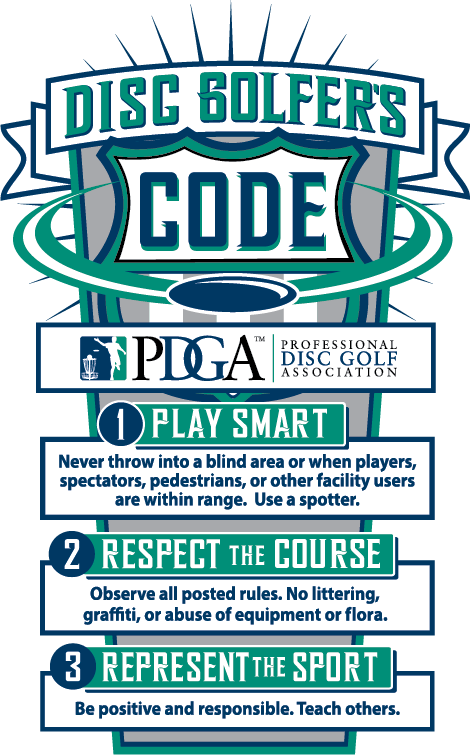 In addition, it’s good to be familiar with The Disc Golfer’s Code.

Was that last hole a par 3 or a par 4? Was my 3 a birdie or a par? That’s a good question, but when it comes to keeping and comparing our scores, the numbers are what matters most.

After each hole, the player keeping the official scorecard will report their own score and then ask each other player to report their score for that hole. The easiest way to do this is simply to say how many throws it took you to complete the hole. “I took a 3” is clearer and easier than “I got par.” 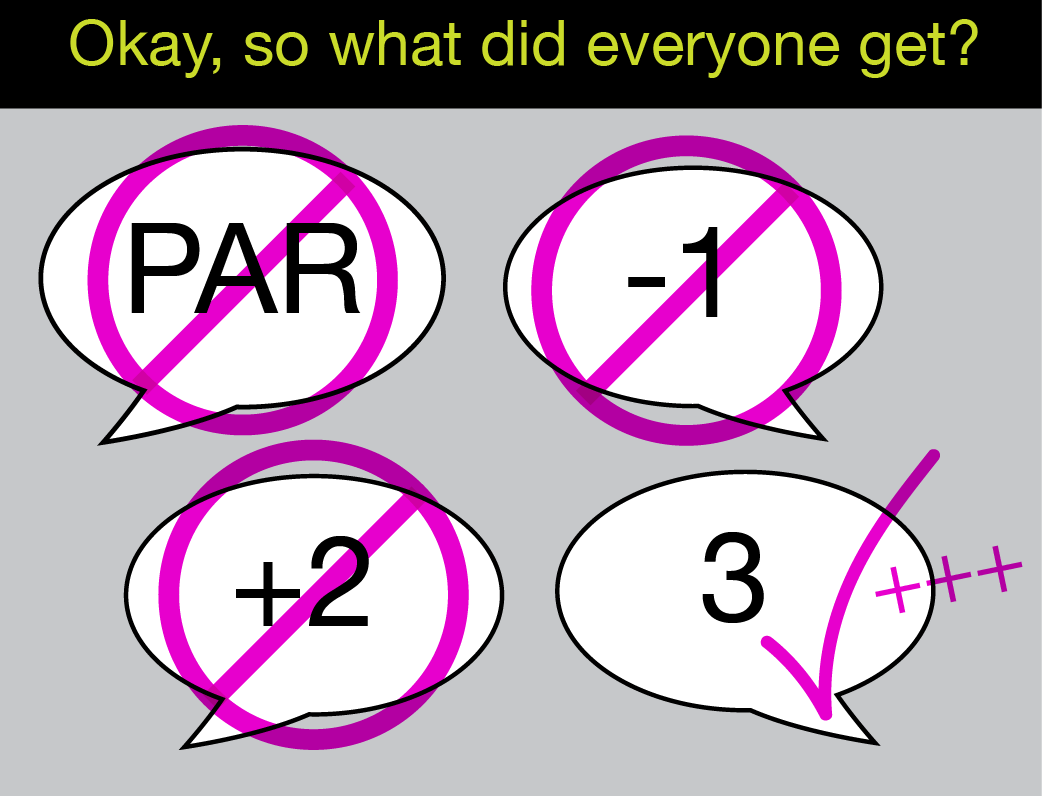 Speaking of scorekeeping, remember that the group should share scoring duties and that every group needs two independent scoring methods – like the Digital Scorecard and a paper backup – that they can compare at the end of the round for accuracy before turning them in to the TD.

The mini marker disc might be the most underrated plastic circle in your bag. When you walk up to your disc lying on the ground, you have choices! You can play from your lie as measured from behind that disc, or you can use your mini marker to mark directly in front of it, remove the thrown disc, and play from your lie as measured behind the mini.

Your disc is right in front of a tree? Mark out and get your foot in there. Your disc is at an awkward putting range? Get yourself a disc’s width of advantage. You want to throw that same disc again? Put down that mini and huck. 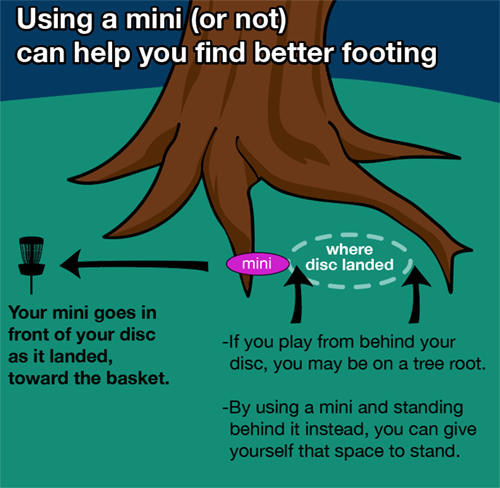 When not to use a mini is just as important. Your disc straddles the 10m putting circle? Don’t mark out and follow through when you putt. Disc lands at the edge of a muddy puddle? Take the lie on solid ground.

Strategic use of your mini can turn a harrowing shot into a simple one, and make tough footing into good footing.

Except in Leagues, taking a cash prize at a PDGA event - something only offered when you play Pro divisions - means you are now a Professional-class player. 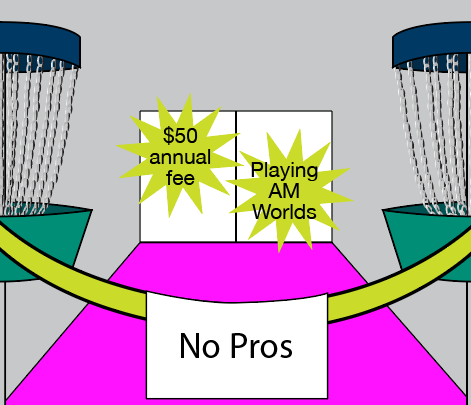 That means you will pay more in annual dues ($75 instead of $50), you will no longer be eligible for Amateur divisions in PDGA Majors, and you may be ineligible for certain divisions at all, depending on your rating.

It is possible to reclassify from Pro to Am, but it’s not a simple process, and requires both time passed since last cashing and that you be below a certain rating.

BONUS! How to Find More Answers

You will undoubtedly have more questions as you play more tournaments. The six items above can also be a little more complicated than the simple descriptions we gave above. Sometimes, things will require looking stuff up. The answers, most times, can be found in two places: The Official Rules of Disc Golf (for things that involve throwing discs, where discs land, where discs fly, and how to keep track of those things) and the Competition Manual (for everything else about tournaments that does not involve throwing a disc). Or, you can contact PDGA staff for rules questions and other concerns.

From everyone at the PDGA: good luck and good skill at your first tournament!