Playing Disc Golf By the Code

Playing Disc Golf By the Code

A Few Tips to Remember as Disc Golf Continues to Grow 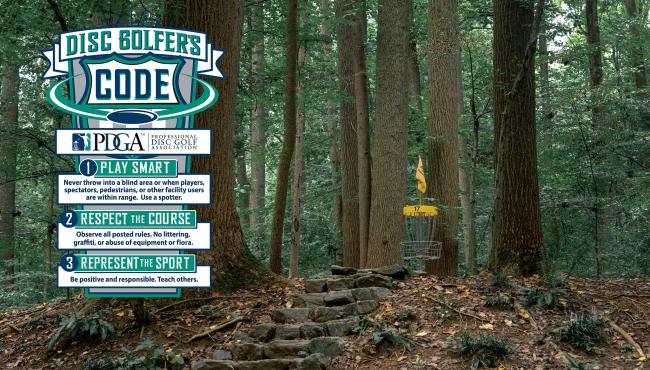 Golf, at its core, is a sport of integrity and courtesy to fellow players, the course, and the game itself. It’s a game of personal responsibility — a self-officiating battle between the player, the course, and competitors.

The rules of disc golf are thorough, and the enforcement of the rules are critical to upholding the integrity of the game, which, as you know, has absolutely exploded in recent years.

With the massive influx of new players finding disc golf, both as casual and tournament players, there are a few guidelines that, at the end of the day, protect and uphold the integrity of the game.

It all goes back to three simple key components that were devised in 2009 by the PDGA Board of Directors: The Disc Golfer’s Code. 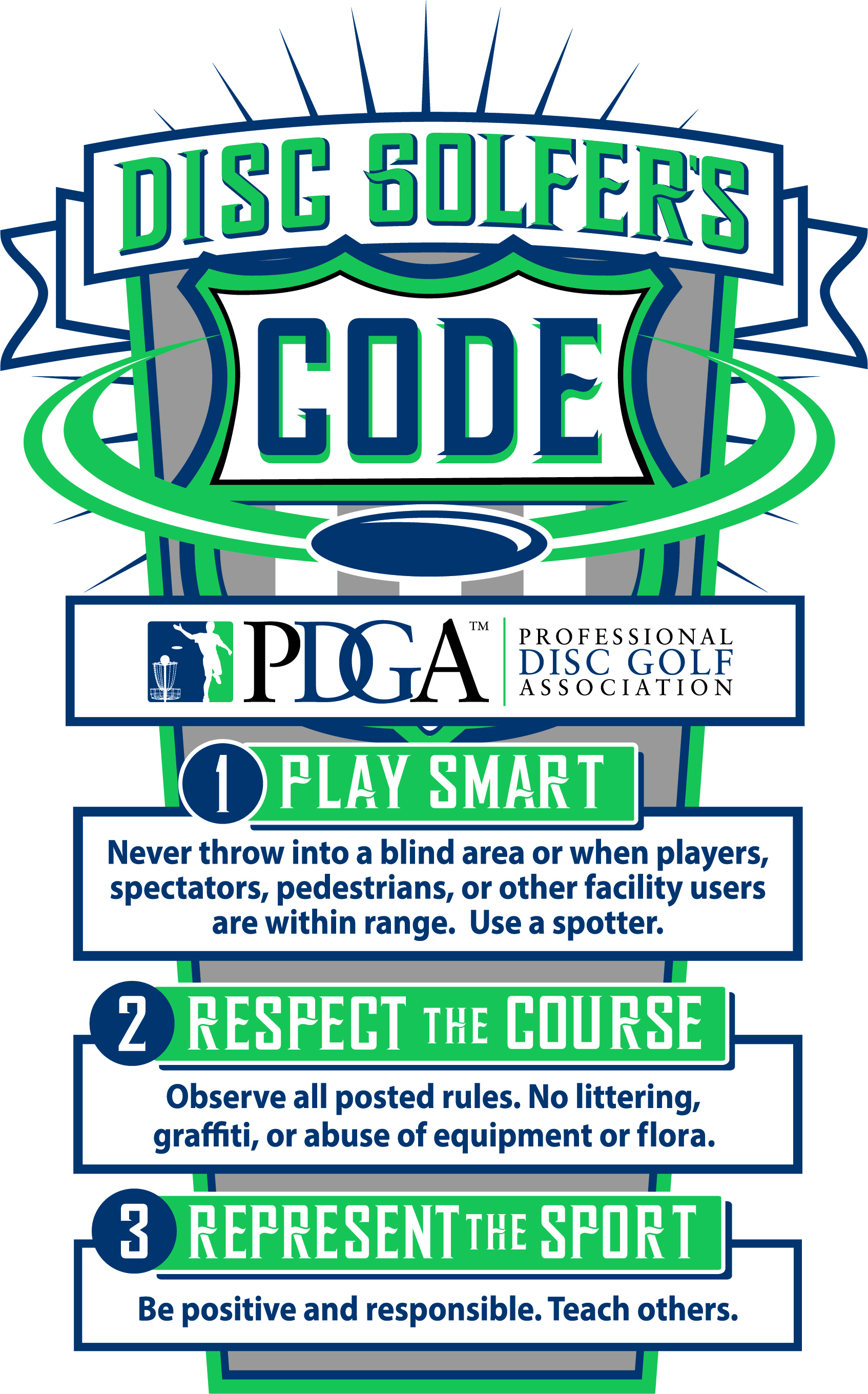 It all starts with respecting others on the course, both disc golfers and other park patrons. Disc golf courses around the world are packed with new players so it’s a reminder to respect those around you. Never throw into a blind area or when players or park patrons are within range. Golf is a game of patience so using some in these situations is paramount.

It’s clearly stated in the rules that a player must not throw if there is a risk of injuring or distracting other players or throwing out of order.

Wait for every area of the hole to be clear before throwing and don’t take off down the fairway until all players have thrown their shot. 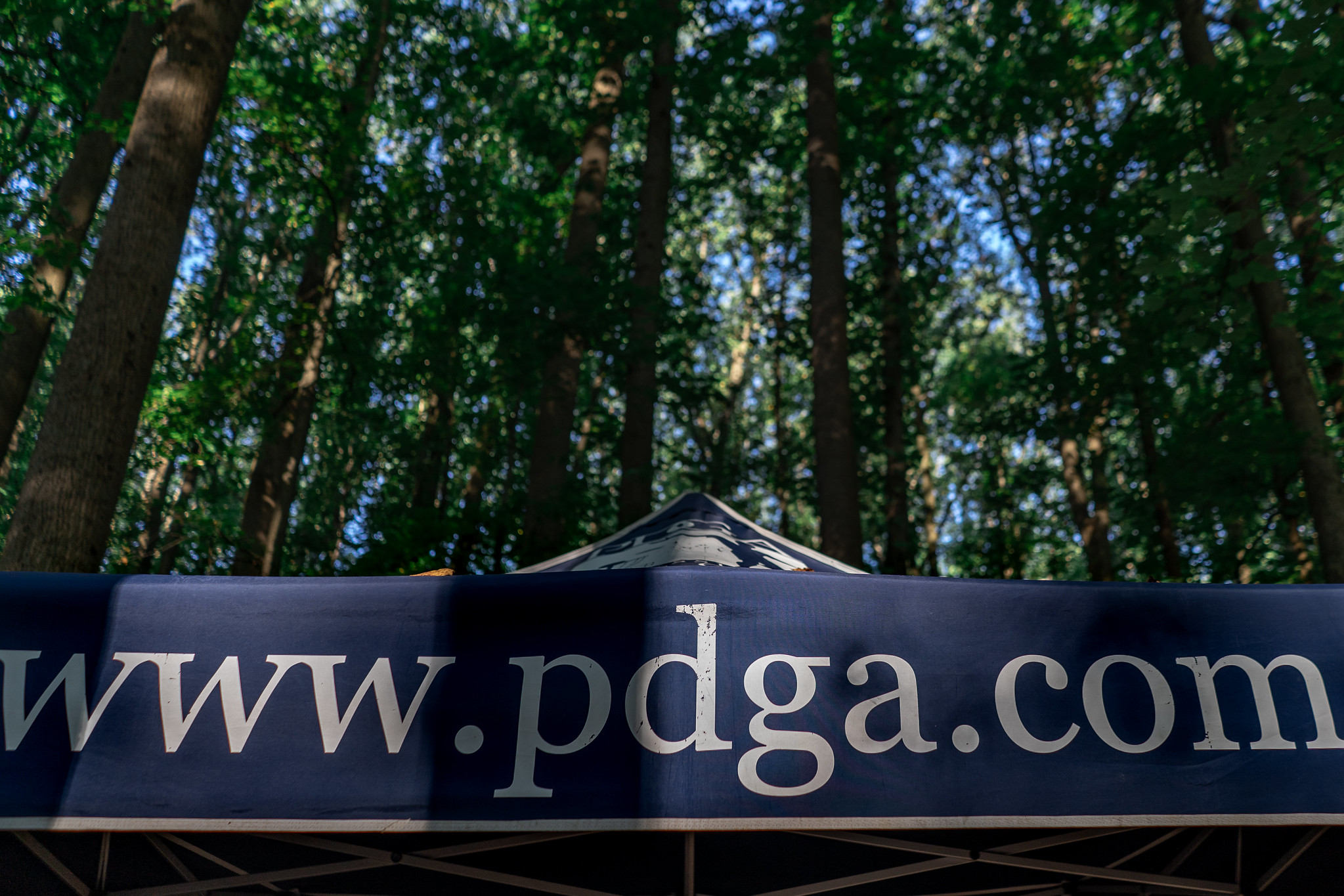 We’re so blessed to play this game in beautiful venues throughout the world and it is critical that we respect these courses and the land that they occupy.

This includes: No littering of any kind – cigarette butts, snack wrappers or bottles; graffiti – no need to write your name on a basket that you’ve aced. It’s probably been aced before; abuse of equipment or flora – is that small branch in the way of your putt? Too bad. Don’t touch it.

Be positive and responsible. Learn the rules and teach others. With so many new players, patience comes back into play here. While competitors in PDGA-sanctioned events must adhere to the rules or face consequences, in casual or league play, it’s best to have a little patience if a new player isn’t clear on the rules. Remember, you were in their shoes at one time. On the flip side, if you’re a new player, take advice and corrections with a positive attitude as well.

In a broader sense, representing the sport means upholding yourself and competitors to a professional standard. Off the course, this means sharing disc golf positively with friends, family, and online. On the course, it means professionally applying the self-governing aspect of the sport during sanctioned play. While you can lean on TDs and Course Marshalls for help enforcing rules, for now, the players are the referees.

With a massive influx of new tournament players, let’s look at Section 3.03 of the Competition Manual, which addresses player misconduct; a set of guidelines meant to maintain professionalism, fairness, and safety.

Section 3.03 requires that “all players must adhere to a professional standard of sporting ethics, courtesy, and integrity while participating in a PDGA-sanctioned event and when commenting to the media.”

This standard includes the Courtesy Rules defined under section 812 of the Official Rules.

Players must not throw if the throw might injure someone or distract another player (812.A.1); throw out of order without consent or when it would impact another player (812.A.2); engage in distracting or unsportsmanlike actions such as shouting (unless warning someone at risk of being struck by a disc), cursing, striking, kicking, or throwing park, course, or player equipment, moving or talking while another player is throwing, advancing beyond the away player (812.A.3); leave equipment where it may distract other players or interfere with a thrown disc (812.A.4); litter, including cigarette butts (812.A.5); or allow their smoke to disturb other players (812.A.6).

On the other hand, players can be called for a courtesy violation if they fail to perform actions expected by the rules including helping to find a lost disc (812.B.1.a), moving equipment when asked (812.B.1.b), and keeping score properly (812.B.1.c).

Players are also expected to watch the other members of the group throw in order to ensure rules compliance and to help find discs. (812.B.2)

The public display or use of tobacco products, including all smoking and chewing tobacco products as well as electronic and vapor cigarettes, whether or not they are tobacco-based, at all PDGA Major and Elite Series events as well as at any PDGA events that solely offer Junior divisions, is also prohibited and will be treated as a courtesy violation. (3.03.G)

A player receives a warning for the first violation of any courtesy rule, and each subsequent violation of that rule within the same round incurs a one throw penalty. Courtesy violations may be called or confirmed by any affected player or by a tournament official, and repeated violations may­–at the discretion of the Tournament Director—result in disqualification from the event. (812.C)

Other actions that constitute player misconduct may result in a warning but may also lead to immediate disqualification based solely on the TD’s discretion.

These include the public display or use of alcohol from the two-minute warning until the player’s scorecard is submitted at C-Tier events or L-Tier events where event venue rules prohibit consumption (3.03.B.5); excessive use of alcohol or public intoxication at the tournament site (3.03.B.6); obstruction of, or failure or refusal to cooperate with any investigation by an official into the player’s conduct or the conduct of another player (3.03.B.8); deliberately seeking to manipulate one’s player rating through intentional misplay or withdrawal (3.03.B.9); or any activities not listed but that violate federal, state, or local laws or ordinances, park regulations or disc golf course rules.

The final class of player misconduct violations automatically lead to immediate disqualification by the Tournament Director without a prior warning.

It should be noted that, while provision 3.03.C.3 allows use of lawfully prescribed medication, taking such medication without a valid prescription is illegal and is a player misconduct violation. Any player found to have used or been under the influence of prescription medication that was not specifically prescribed to them while competing in a PDGA-sanctioned event can be reported to the Disciplinary Committee, who may begin an investigation and initiate disciplinary action.

Taking prescription medication without a lawful prescription outside the confines of sanctioned play, while not subject to the jurisdiction of the PDGA disciplinary process, is illegal under the law and should be reported to law enforcement.

In addition to penalties and disqualifications, players are required to report any player misconduct to a Tournament Official when available or to the Tournament Director directly at the completion of the round (3.03.D)

Similarly, Tournament Directors are required to report any disqualifications and player misconduct to the PDGA using the Disciplinary Action Form as quickly as possible (3.03.E), and the PDGA Disciplinary Committee may, at its discretion, begin an investigation and take additional disciplinary action.

Players that are disqualified from an event forfeit any claim to prize money or merchandise and will not receive a refund of their entry fees (3.03.F)

Again, the explosive growth of the sport is fantastic. The influx of passionate and involved players has bolstered the strength and presence of our sport worldwide. Next time you're out on the course, be the example. Pick up that piece of litter, respect fellow park patrons, and professionally educate others as you discuss the sport. Together we can continue to build disc golf as a global sport and pass time.