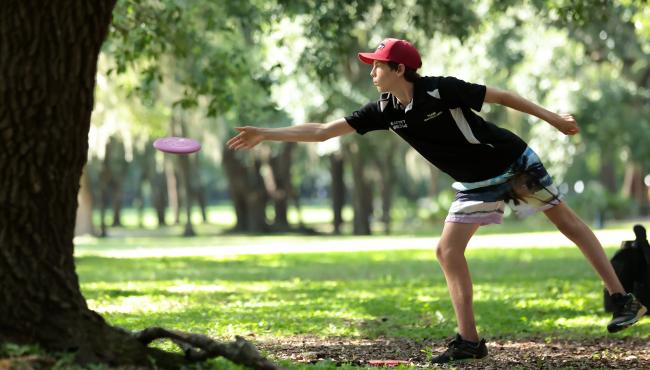 After all the practice and preparation, there’s nothing that can quite simulate stepping up to the first tee of a world championship.

For Justin Long, that first shot of the 2021 PDGA Amateur Disc Golf Championships couldn’t have gone any better as he watched his disc fly straight into the basket on the first hole of the day for a Worlds ace.

Amongst the rest of the leaders after the opening day of action in Orlando, Florida, it took a little time for those nerves to settle and the discs to start flying.

The result was a strong start to the grind that comes with chasing a world title.

“It was a little shaky,” said Evan Scott, a 16-year-old from South Carolina who finds himself one shot off the lead in the Advanced field. “I got a little bit nervous on a couple of these holes. I’m happy overall.

“Tomorrow, attack is the word and just be consistent and hit lines.”

Scott is one shot back of Ezra Hapner, who fired of the hot round of 11-under in the A Pool at Lake Hiawatha. Ricky Ovaitt and Mitchell Short round out Wednesday’s lead card during the first of two rounds at Turkey Lake. 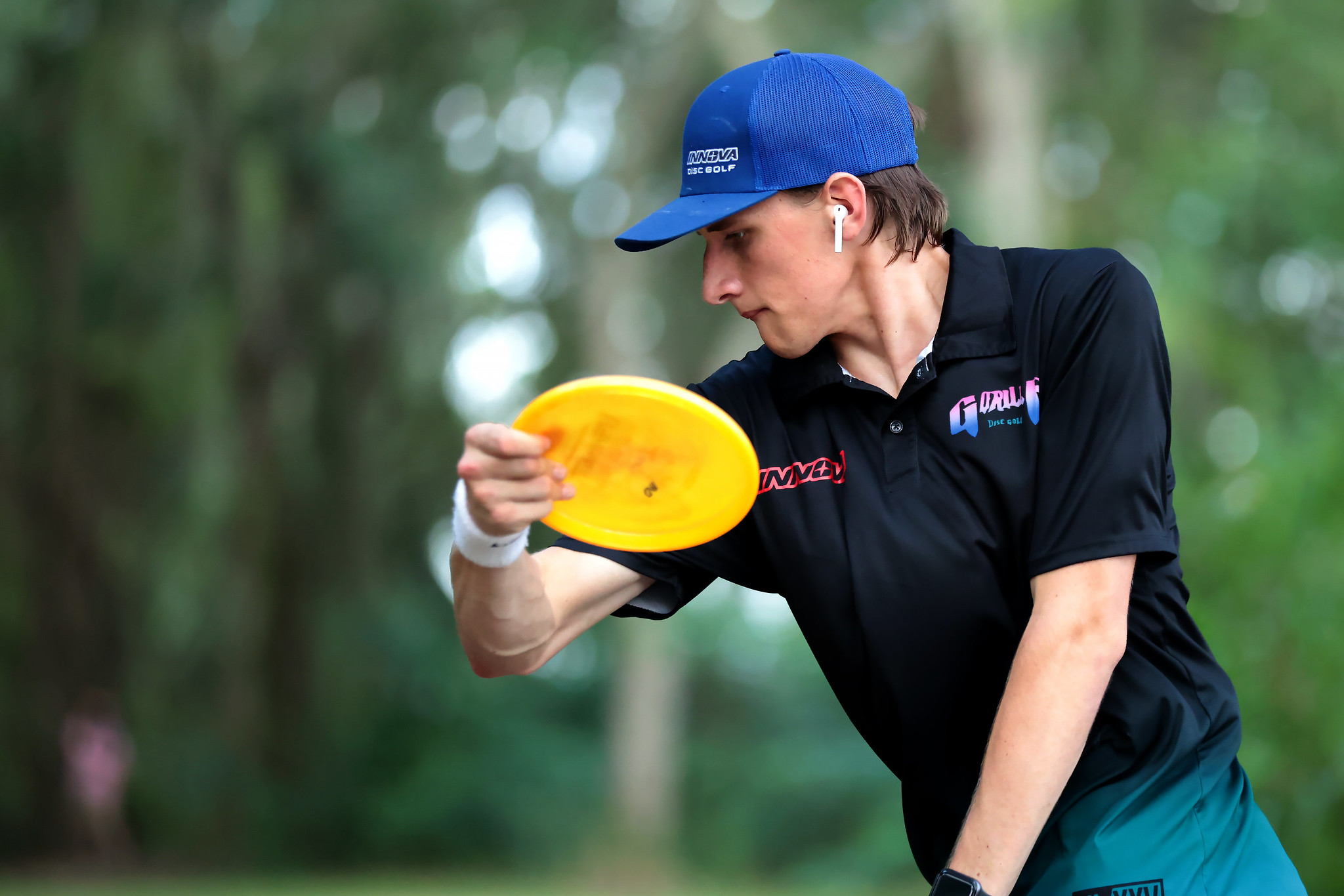 Robert Burridge tees off during day one of Am Worlds in Orlando. Photo: Conrad Meyer / PDGA

Robert Burridge, also at 9-under, has experience on the bigger stages of the game. Burridge, who won the 2021 United States Amateur Disc Golf Championship in Michigan in June, was a little upset with his opener, despite being two sticks off the hot round.

“Frustrating,” Burridge said. “For the most part, when I would step up to a hole and be like, I need to get this one, I usually didn't. It was not the best, but I was able to string some together in the middle and got a few long putts. I ended up alright. Tomorrow is attack.”

Oliver Richardson (-10) leads the B Pool in Advanced, ahead of Alexander Muniz and Cole Farley, who went 8-under at Hiawatha.

Nathaniel Johnson finished with a 10-under total to lead the C Pool through two rounds at Turkey Lake on Tuesday. 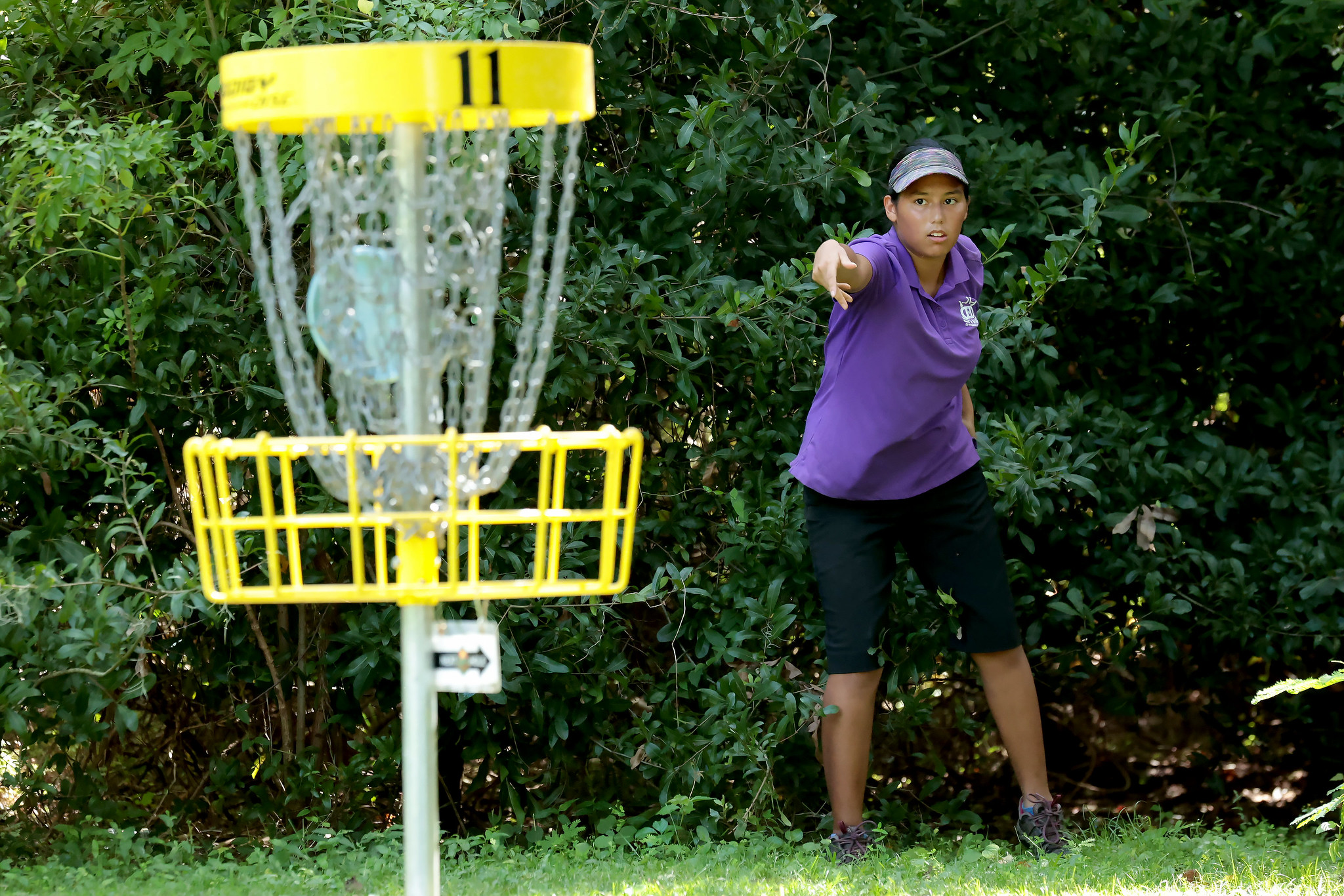 In the 43-player Advanced Women’s field, another player with a pedigree on the big stage, Melody Castruita, battled to the top of the leaderboard at Burnett Park. The 2021 PDGA FJ18 World Champion sits at 5-under par, two ahead of Kristen Knauer and Julie Moens. Chantel Budinksy rounds out the lead card at 2-under.

“I think sometimes I went a little too aggressive,” Castruita said. “I’ve got to lay off a little bit in my second round. I’m happy with my drives, it was my putts today. Tomorrow, go aggressive when I need to.”

Budinsky felt a little bit of those opening-round nerves as well.

Chantel Budinsky runs a putt during day one of Am Worlds on Tuesday. Photo: Conrad Meyer / PDGA

“My game plan was to play safe, but I think I played a little safer than I wanted to,” the Windsor, Ontario, Canada native said. “I felt like my putting was nervous. I’m hoping to do a little better on the green next round and keep driving well.”

It's the first moving day on Wednesday for the 746-player field ahead ahead of the shuffle after day two.