Delayed Due to Weather

Delayed Due to Weather 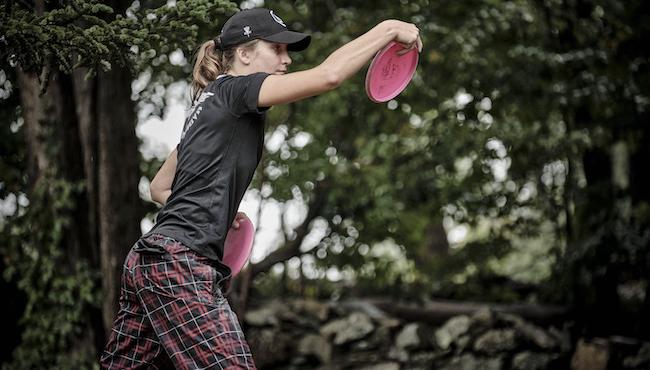 Kat Mertsch (-2) weathered the storm to lead after round one at Maple Hill. Photo: Kevin Huver / DGPT

And then, the rain came…

As the players and spectators ventured onto the iconic grounds of Maple Hill, the topic of conversation was not if the weather would move in… it was when.

A 100% chance of precipitation and potentially severe thunderstorms was in the forecast for much of the day, and the skies already hid the morning sun behind a gray mist.

But, the business of disc golf on the Disc Golf Pro Tour is to play, so each grouping threw over the familiar pond on the first hole and began round one of the DGPT - MVP Open at Maple Hill.

In the midst of the FPO start to the day, an expected thunderstorm zeroed in on the Christmas tree farm, delaying some cards from beginning the day.

And, just as the final foursome putted out on the opening basket and moved to the tee of hole two, the shriek of an airhorn echoed through the pines. More heavy rain. Players and spectators moved toward shelter quickly

During the delay, the severity of the weather was not the concern, but rather the condition of the course. Would water drain keeping tee pads and fairways playable? Would walking paths stand up to heavy use by players and fans? Could safety be reasonably assured across the property?

Disc Golf Pro Tour leadership and members of the PDGA Operations and Logistics Team met at midday, discussing course assessments, player feedback and options for how to proceed.

The PDGA Competition Manual states that a round, once begun, must be completed. So, the FPO field would need to resume their opening rounds once the course was ready for play. However, in the MPO field, time constraints would necessitate the cancellation of round one.

The MPO field will play a three-round event beginning late Friday morning. There will be no final-round cut.

The FPO field, meanwhile, ventured back out under less-hostile skies, to play disc golf before a still-present gallery and a captive Disc Golf Network audience.

FPO: Nine Players Within Three Strokes of the Leader

When play resumed at 2:45 p.m. local time, players trod gently. Rain was still falling and a chill had developed in the Massachusetts air. But within a few holes, the showers turned to sprinkles, and the clouds to sunshine.

Playing from one of the first groupings of the day, Eveliina Salonen relied on a string of birdies, beginning with the infamous eighth hole – which plays over water to an island green surrounded by a rowdy bunch known as “The Eight Holes.” Salonen posted an even par-round. 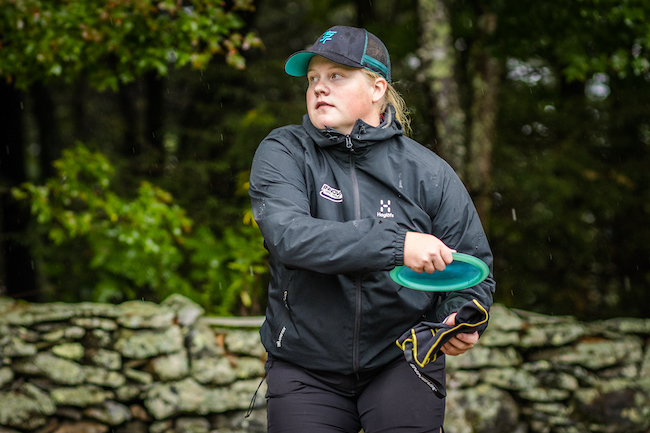 Then Kat Mertsch tallied no bogeys through her last twelve holes, surging to the front thanks to birdies on the 17th and 18th. Mertsch’s 2-under clubhouse lead would hold up all afternoon, and she will lead the way in round two.

Others ebbed and flowed, like the water splashing in the creeks and ponds across Maple Hill. Up-and-down scorecards like those of Sarah Hokom, Valerie Mandujano, Madison Walker, Ella Hansen and Paige Pierce proved good enough to pace the field. All finished at 1-over-par through one round.

But only Missy Gannon (E) and Kristin Tattar (-1) joined Salonen and Mertsch with par-or-better opening rounds. This foursome attempt to outrun the others beginning on a crisp, cool – but dry – Friday morning in the Massachusetts countryside.

Players Vying for a Berth in the Tour Championship

Like the MPO field, the FPO field will not have a cut before Sunday’s final round in this second – and final – playoff event before the DGPT Tour Championship. All players will compete through the weekend. After the event the top 30 in the MPO tour standings will be locked into the championship, with the next six eligible to play their way into the two remaining slots in the championship bracket. Likewise, the top 14 FPO players in the tour standings will seal their bid for the championship, with the next six to play for the final two slots in the tournament.

When Sunday arrives at Maple Hill, drama is sure to be found at more than just the top of the leaderboard.

Live coverage of round two on the Disc Golf Network begins at 9:15 ET on Friday.