All Around the World Same Song

All Around the World Same Song 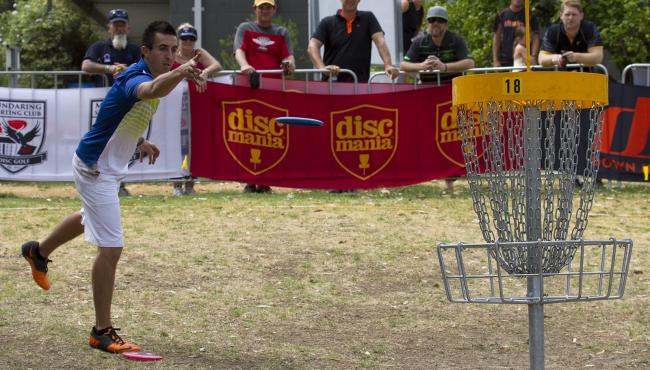 Well, the first Major event of the year has come to a close and it has gotten us plenty excited for the 2015 season. The first of its kind in Australia and the southern hemisphere, the 2015 Aussie Open was the culmination of years of education, promotion and preparation for the tournament staff and crew. When the final putt dropped, a prominent, almost proud roar erupted from the gallery; not only to congratulate the winner, but almost as a sigh of relief that they had pulled it off. It was proof that all the blood, sweat and tears was truly worth the effort. And the players noticed too. Paul McBeth may have summed it up perfectly when he said, “I was blown away by the event and hospitality we all had for [the tournament staff’s] first major event.”

This event has been a long time in the making. Val Jenkins mentioned in her acceptance speech, “…when we came here in 2010, there was one course in [Tasmania] and that was it….” Now there are 22 courses in Australia, and 3 in the Perth area. One of those is the Gold track at the Mundaring Sporting Club; a true diamond in the bush. Event promoter Chris Finn and Director Robert Kyle and crew spent countless, painful hours prepping the course, tweaking it to make sure it was of the caliber expected of a Major event, and deliver, they did. Players came off the course with rave reviews. One referred to it as “…the Memorial meets the European open,” a pretty high compliment that was well deserved.

Because Australia doesn’t have its fair share of big events, the sport is still relatively fresh, despite it’s nearly 40 year history. There are still many clubs in development and new players are getting involved every day. This results in a low amount of professional players and because of that, amateurs were invited to play in the event as well. This gave them an opportunity not only to play on the same track as the pros (including several World Champions), but to watch them compete as well. We would like to congratulate our two Advanced division Champions, local Arana Kenyon and Rami Roppo from Finland.

New Zealander Simon Feasey started the final round with a sizeable lead. He knew that another clean attempt would likely produce a Major title, but that can be easier said than done on the difficult Gold track of the Mundaring Disc Golf Park. He played smoothly, only being tested a few times. Simon managed to card four birdies in his final round, with the only big mistake coming on the difficult par 4 12th, making a triple bogey 7. Those three throws would be the only difference between himself and a score of even par for the round, as he finished with a +3 68 to win by 11 shots over German Martin Doerken.

The Open Women’s field was a bit smaller than expected, as the long journey may have scared off a few viable competitors. That didn’t stop Valarie Jenkins from playing lights out golf all weekend. Her average round rating was an astounding 980, and in round 2, she would beat nearly 90% of the entire field, including all the men. She would finish the tournament with a total score of +7; incredible considering the tough conditions and the grueling length of the track. Her victory here adds yet another Major title to her already impressive resume. At the closing ceremony, graceful as ever, she accepted her locally-made didgeridoo trophy by saying how proud she was that women in disc golf were starting to emerge onto the scene down under.

The Men’s Open division saw a much tighter race entering the final round. Paul McBeth held a five throw lead over German whiz kid Simon Lizotte. Typically, this would mean Paul could set it on cruise control, but after two consecutive days of tying the course record with Lizotte, he knew that he would have to continue to keep his foot on the gas, as Simon was certainly capable of making another big move. The round would start off in relative calm fashion, with both players carding four birdies on their first eight holes. If you remember from days prior, this was the section of the course that had been giving Paul problems, and they surfaced yet again on that same 12th hole. A bogey there, followed by a much unexpected bogey on the short par 3 13th, and suddenly Simon had closed the gap to a mere 2 shots.

After trading birdies on the next two holes, they came to the dreaded 16th, a 375 meter (1230 feet) par 5 that snakes its way across a wide open fairway, funneling down to a narrowed green that is entirely surrounded by OB. Simon, knowing that he had to birdie or eagle to even have a chance, uncorked a giant anhyzer off the tee, only to see it fade out to the left of the fairway and come to rest on the wrong side of the OB line. Paul threw a calculated approach on his third shot while Simon was throwing out of bounds again on his second, and after the dust had cleared, Paul had made birdie and Simon a bogey 6. The lead was back to 4 throws with only two to play. A mere formality at this point, McBeth would finish his last two holes with a par and a birdie to win the event by six throws. This would be his 7th Major title, and his 4th out of the last five outside of the States. Fourth place finisher Nate Doss said, “[Paul] is the best player I’ve ever seen, and that includes Ken Climo.” We are truly in the midst of something special here.

The event concluded with a traditional aboriginal dance routine, sending the players off with a bit more of the local heritage that has influenced this incredibly welcoming Australian culture. Congratulations to all our Champions of the 2015 Aussie Open, and may this be just the beginning of what is likely the explosion of disc golf Down Under. A complete list of the scores can be seen on the event page at pdga.com and be sure to check out our photo gallery on Flickr. Next we head back to the States for the start of the 2015 National Tour season in Arizona at the Memorial Championship. We hope to see you there!