Wysocki's Goes Wire-To-Wire, Down to the Wire to Win European Masters

Wysocki's Goes Wire-To-Wire, Down to the Wire to Win European Masters 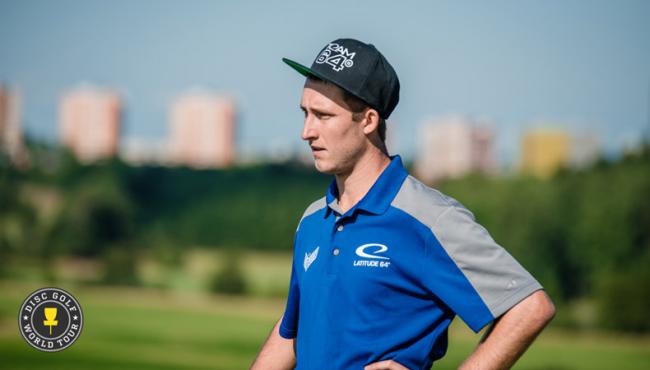 It’s difficult to capture in words just how incredible it was to watch the final round of the 2016 European Masters. Playing for the third straight day in perfect weather on one of the most beautiful and challenging disc golf courses on the planet, Järva DiscGolfPark, with a lead and chase card all within a few strokes of each other, there simply isn’t much else you can ask for.

Wysocki Leads Heading Into the Final Round

Finishing as the leader after rounds 1 and 2, Ricky Wysocki #38008 was on a mission to take home the title at the 4th stop on the Disc Golf World Tour, not to mention add a third PDGA Major victory to his already very impressive resume. Starting the round with a lead of just one, he had no idea just how difficult it was going to be.

As the afternoon progressed, hundreds of spectators began to pile up around the tee pad of hole 1, waiting for the lead group to make their way over. Joining Wysocki was Eagle McMahon #37817 (USA) who shot the course record during Round 2 to bring Wysocki’s lead down to one, as well as Denmark’s KJ Nybo #28903 three strokes back, and defending European Masters champion Paul McBeth #27523 (USA) one off of KJ. 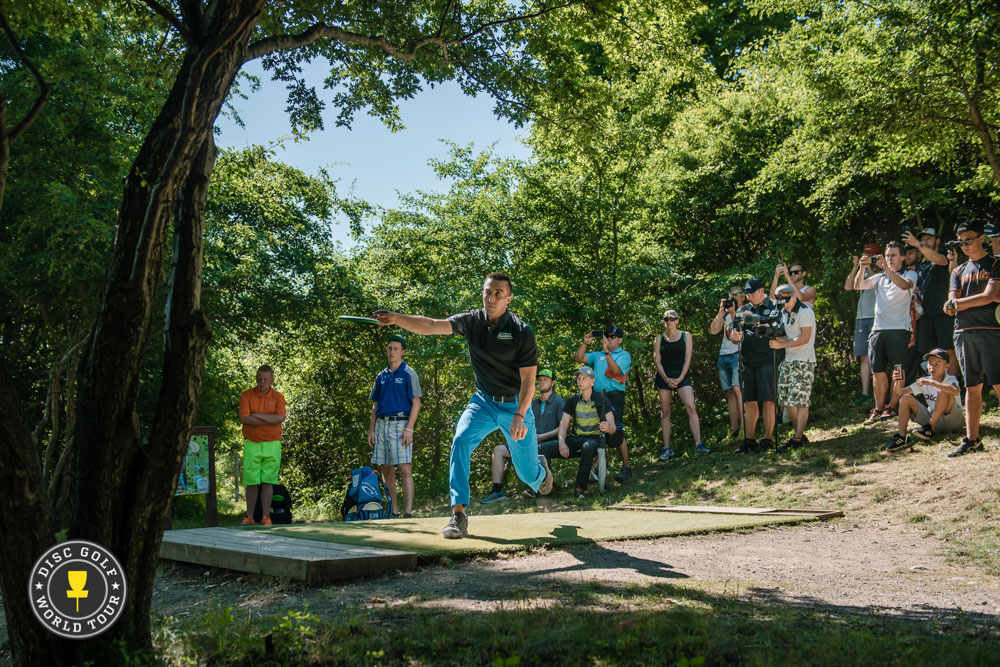 Paul McBeth started off his round strongly.

McBeth’s front nine was relentless, carding six birdies and three pars including four birdies in a row to start the round. This was a huge blow to Wysocki, as his front nine left him finishing at even par for the round, not only allowing McBeth to catch him but to give McBeth a lead of two going into the back nine. 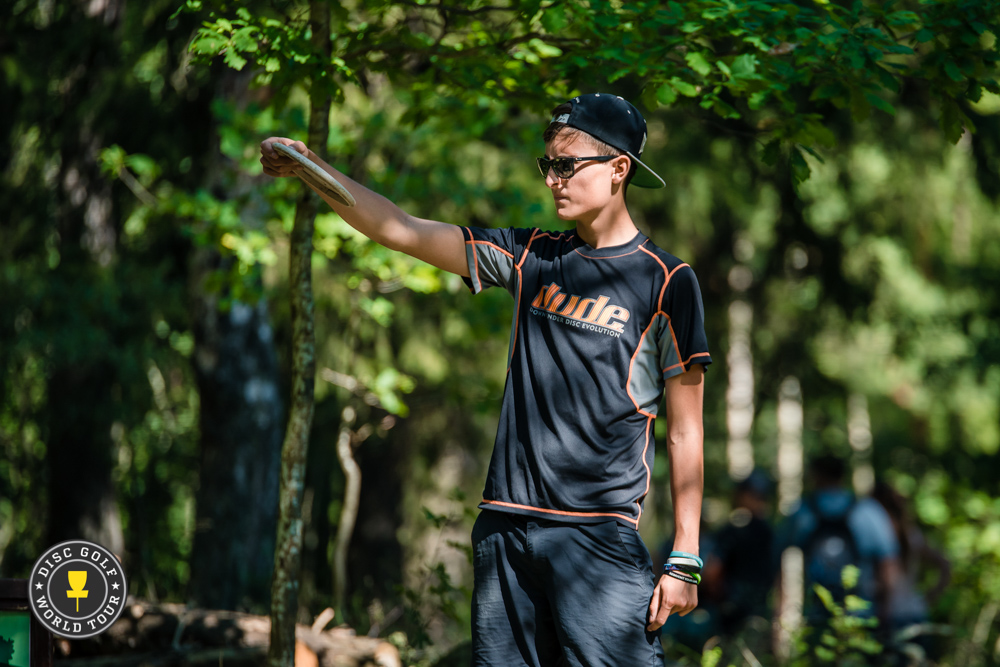 Eagle McMahon had also gained enough ground on Wysocki during the front nine to pass him, while KJ birdied hole 9 to finish the front at even par, still three behind Ricky. Meanwhile, Paul Ulibarri #27171 (USA), playing from the chase card, was making a move. Ulibarri started the round tied with McBeth, and as we made the turn to the back nine he too was in the running for the title. 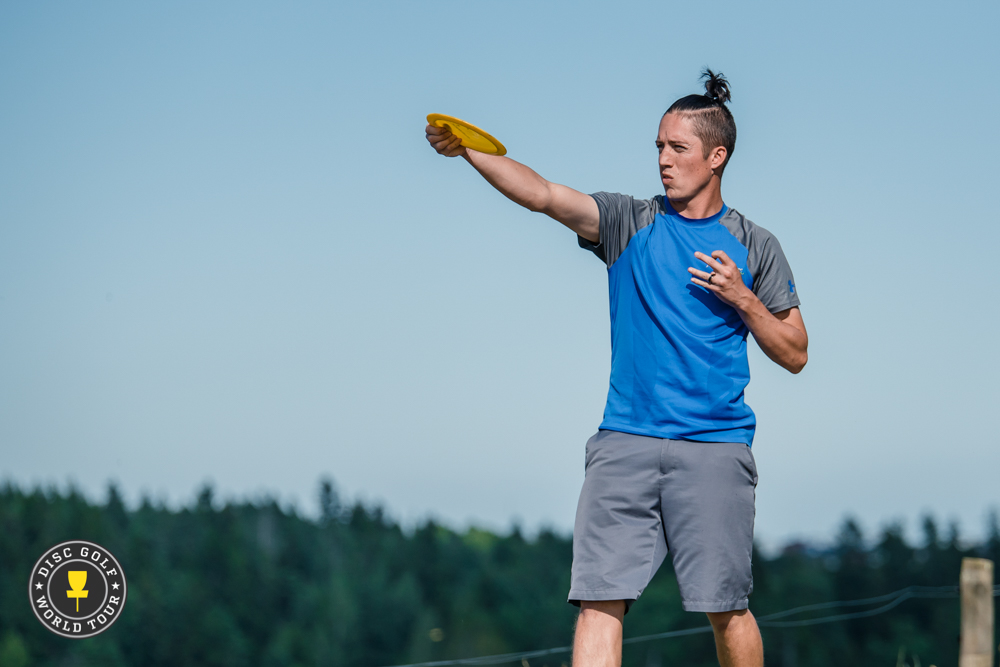 Paul Ulibarri was also in the hunt playing from the chase card.

It was holes 12 and 13 when the momentum started to swing back in Wysocki’s favor. McBeth carded back-to-back pars while Wysocki carded back-to-back birdies, meaning the dynamic rivals were tied up once again with five holes to go. Ulibarri was still holding his ground on the chase card, with a birdie on 12 followed by an incredible eagle on hole 13.

Ricky takes a well earned birdie on 12 to gain a stroke on Paul. #RichardWysocki #Hole12 #Round3 Follow live scoring at www.discgolfworldtour.com/live #DGWT #MastersDiscGolf

McBeth’s drive on 15 left him with the only real look at a birdie, with the gallery completely engulfing the green. Before Paul had a chance to putt, KJ Nybo set the bar high with an uphill throw-in birdie from 100+ feet away out of the woods. As the gallery held their breath, McBeth’s putt hit the chains, giving him the lead now with three holes to go.

As one of the shortest holes on the course, Hole 17 is one you would expect the entire card to birdie. However, the low ceiling and fence barricade that blocks the green makes it a lot trickier than meets the eye. McBeth and Wysocki threw the same low forehand route, but only Wysocki pulled it off, tapping in for birdie to tie it up one more time, with only the treacherous 18th hole remaining.

Ricky ties Paul in the lead with one hole to go! #RichardWysocki #Hole17 #Round3 Follow live scoring at www.discgolfworldtour.com/live #DGWT #MastersDiscGolf

Two perfect drives off the tee meant that both Ricky and Paul would have to throw blind approaches up the hill and towards the green with the gallery awaiting. All you can do is listen for applause from those gathered around the green to get an idea of just how good the shots were. Ricky’s applause was minimal, but Paul’s was non-existent.

When we arrived to the green we saw that Paul’s approach was 45 feet long. Ricky’s on the other hand, was parked. Paul set his feet, let go of the putt on a good line, but it hit an awkward part of the chains and fell to the ground. With a putt of 20 feet at the most, an adrenaline-fueled Ricky Wysocki tapped in for birdie to win his first PDGA Major and the 4th stop of the Dis Golf World Tour. His wire-to-wire win came down to the wire here at the European Masters, and we wouldn’t have it any other way.

#PlayByPlay @Paul_McBeth on hole 18. Tied to the lead on the tee with Wysocki, McBeth is left with an uphill putt from outside the circle to birdie. Tickles the chains from the strong side but can't make the putter to stick. Wysocki taps in his birdie putt and takes home the title! What a battle, thanks for watching! See full scores at discgolfworldtour.com/live #DGWT #MastersDiscGolf #discgolf #Round3 #hole18 #paulmcbeth

Ricky Wysocki takes the birdie and the WIN! #RichardWysocki #Hole18 #Round3 Check out the final scores at www.discgolfworldtour.com/live #DGWT #MastersDiscGolf

When the final scores were handed in, they resulted in a playoff for the third place on the podium between Eagle McMahon and Paul Ulibarri, who made a good run from the chase card with a round of -7. Unfortunately that wasn’t enough, as McMahon took third after a two hole battle, playing holes 1 and 13. Uli’s approach was caught in the last tree before the green and he failed to convert, while Eagle had no problems taking his birdie from well inside the circle.

Congrats to Ricky Wysocki and all of the competitors that put on such an amazing show for everyone here at Järva DiscGolfPark and everyone watching at home. The amount of work that Jussi Meresmaa and the Disc Golf World Tour media and production teams put in to make sure that the fans of disc golf that can’t be here in Stockholm, Sweden have the ability to follow along in so many ways is truly amazing. 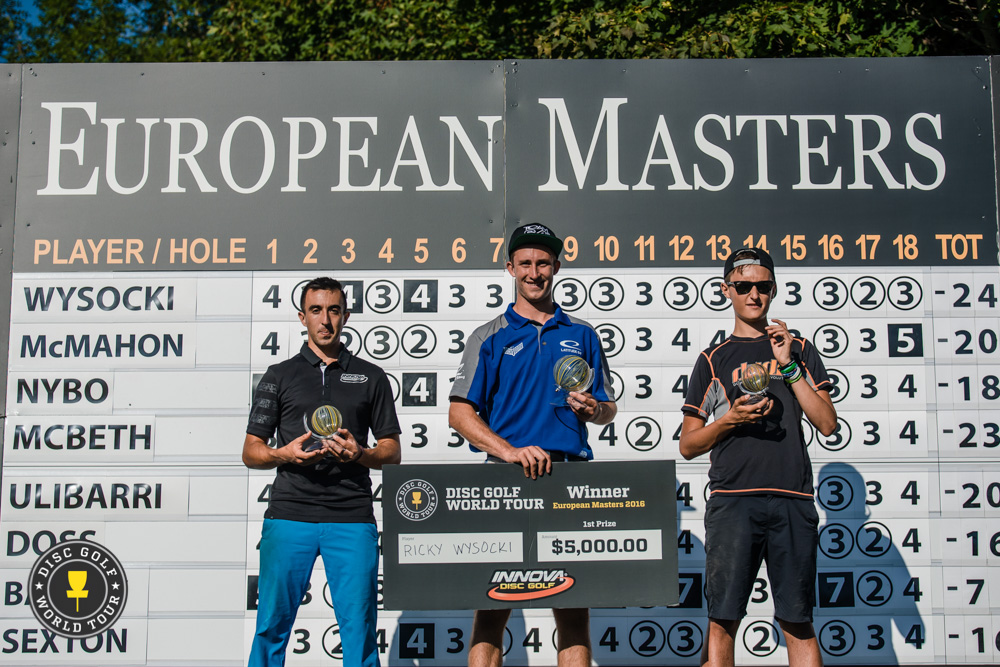 Next Up - World Championships

The next PDGA Major is a big one to say the least, the 2016 PDGA Professional Disc Golf World Championships in Emporia, Kansas, USA, coming up in less than two weeks!