Wow. What a day. The morning began with an intensely close race for the 2016 Vibram Open title in the Open Women’s division between Paige Pierce #29190 and Catrina Allen #44184, with Paige sealing the deal on the 18th hole.  We knew we were in for a similar situation in the Open division, but we had no idea just how close the fight to the finish would be.

For the fourth day in a row, the Open Women’s division at the 2016 Vibram Open teed off at Maple Hill in near-perfect weather conditions. After spending two days in the lead, Sarah Hokom’s third round gave way to Catrina Allen #44184 and Paige Pierce #29190, who finally caught up to and eventually surpassed Hokom heading into the final round this morning.

Pierce, Allen Catch Up to Hokom, Williams Alone at the Top

With roughly half the field cut after Round 3 of the 2016 Vibram Open, those remaining can rest easy knowing they’ll walk away with some cash. However, for the elite few in the hunt for the title, the final round is the most nerve-racking and intense. To be towards the top of the leaderboard after three days at Maple Hill is an accomplishment in itself. But for many, being at the top only matters if at the end of the day they walk away a Vibram Open champion.

Technically, it wasn’t “moving day”, but Round 2 of the 2016 Vibram Open sure felt that way. The scores were all over the place, with the competitors constantly climbing up and then falling back down the rankings. With the field being cut in half after Round 3, consistency for today’s round at Maple Hill will be the key to having a chance at playing in the Finals on Sunday.

Sarah Hokom Emerges From Injury as the Vibram Open Leader

It was an exciting day at the opener of the 2016 Vibram Open, both on and off the course. On top of having a majority of the best disc golfers in the world on site ready to take on one of the best courses in the world, today was also the inaugurat of the Disc Golf Pro Tour and the first round of the sixth stop on the PDGA National Tour.

Maple Hill – An Embodiment of Family

“I wouldn’t miss it for the world,” says…everyone. Everyone that’s ever been to the Vibram Open at Maple Hill anyway. The Vibram Open is perhaps the most beloved annual disc golf event of the touring pros, with more reasons than we can fit into any article. One could argue that the Maple Hill Gold course alone is enough to lure the best in the game, but that’s not why they make the trek to Leicester, Massachusetts each year. To quote Tournament Director Steve Dodge #22042, “We embody the concept of family. My mom does the parking, my sister and niece help with the scoring, my brother does the filming, and everyone here is a part of our family. It’s a family farm.

In the world of disc golf, there are some events that don’t need much of an introduction. Formerly known as the Vibram Open, the Maple Hill Open presented by Vibram (MHO) is certainly one of the elite few tournaments that fall into this category. It’s referred to by many pros as the best event on tour, and with good reasons. It takes place on one of the most beautiful and difficult private courses in the country, the payout is massive, and the competition is fierce to say the least. It’s also stop number five of eight on the 2014 PDGA National Tour Elite Series.

Sunday morning was bitter sweet, as the players arrived to the course at Maple Hill Farm for not only the final round of the Vibram Open, but also the last leg of the 2013 National Tour Elite Series presented by our host, Vibram Disc Golf.  Another beautiful day, with temperatures in the mid 70’s with low humidity and plenty of sunshine; there were no distractions for the players who made the cut and prepared themselves to tackle the difficult Gold course one last time.  The top 10 female competitors and 72 men with the lowest totals in the field made the cut, and all were promised to get paid, so everything that took place on Sunday

Ascent to the Top

The Vibram Open closed today with a flurry of great disc golf.  Congratulations to our champions, Valarie Jenkins and Paul McBeth for coming out on top.  With the close of the National Tour Elite Series presented by Vibram comes the NT Points Series awards as well, and our top finishers were as follows: 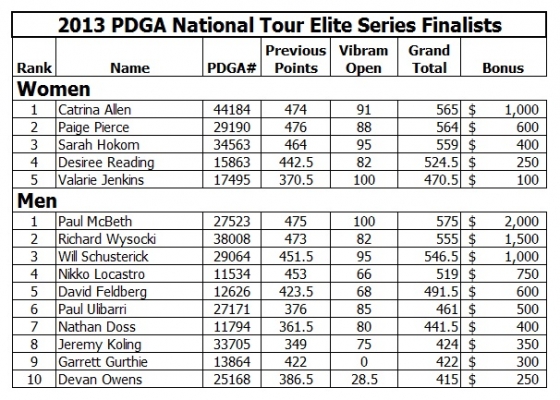 Another beautiful day greeted the players as they arrived at Maple Hill Farm in Leicester, Massachusetts today, readying themselves for round three of the Vibram Open.  Today was a big day for all the competitors, as some were focused on making the cut, while others were trying to separate themselves from the pack.  Both the men’s and the women’s divisions were tight at the top, and with so many others within striking distance, it truly was moving day.  Today was the day we would see players taking more risks as they fought for position going into the final round.  If those risks paid off, perhaps they would make the cut or take the lead, but if not, it would be a long ride home.

A crisp, cool breeze started to build above the dew as the sun rose this morning at Maple Hill, the site of the 2013 Vibram Open.  Another gorgeous day awaited the players as they prepared for the test in front of them.  Shoot well, and position yourself to “make the cut and get paid”, a mantra heard over and over here at one of the most demanding and laborious courses on the National Tour Elite Series presented by the host, Vibram.  Typically, after two rounds of highly competitive disc golf on the tour, our leader would be sitting somewhere close to 20 under par, but not here.  Shooting par at the Maple Hill course is

With the 2013 National Tour Elite Series presented by Vibram coming to a close, there is no better place to crown our final champions of the year than at the illustrious Maple Hill course in Leicester, Massachusetts.  The Vibram Open has always been a player favorite since it was introduced to the National Tour in 2008.  Perhaps it is due to the fact that the course at Maple Hill Farm is one of the game’s most challenging, fair, and well-manicured tracks around the country.  Or maybe it has to do with the countless side events that are prepared by Steve Dodge

Who are YOU Rooting For?

The 2013 National Tour Elite Series points race is very close with two players in both FPO and MPO only two points apart with some followers potentially within striking distance.   Each player brings their best five finishes with them to Maple Hill Farm in Leicester, Massachusetts where they will then add the points that they earn in the final NT and series crowning event - the Vibram Open.

The disc golf lollapalooza that is the Vibram Open rolled into Friday with the start of singles rounds. After the whirlwind of activities on the previous day which included a “5 Spots” qualifier for late entrants, several different doubles contests, a National Tour clinic, and the Players Meeting, the first cards would go off from the first tee bright and early at 7:30 AM, with the weather forecast of sunshine and highs in the mid 80s: perfect weather for golf!