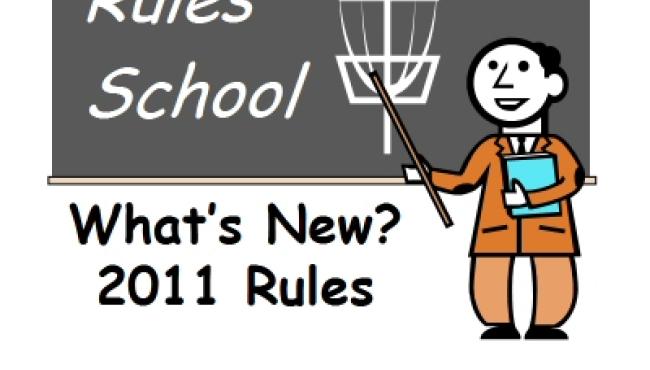 The PDGA Rules Committee has modified several rules that go into effect January 1, 2011. The full text of the updated rules is online here: PDGA Rules 2011 Renewing and new PDGA members will receive a copy of the new combined 2011 PDGA Competition and Rulebook in their member packets.

DROP ZONE: 800 & 803.11
Added the option for TDs to designate a drop zone for a lost disc. This might be done on big downhill holes where lost discs are common and identifying a drop zone farther down the hill speeds play.

HOLING OUT: 803.13
Starting in 2011, a player will not have to remove the disc to complete the process of holing out which was required under current rules. Once the group has decided the disc has come to rest, the player has holed out.

Several target related terms have been officially defined and added to the Definitions section 800 in support of the Holing Out rule. Definitions for Basket Target, Tray, Chains, Chain Support and Pole have been added.

Groups will now be responsible to make judgment calls on how discs enter the basket. Discs that attempt to enter or actually get all the way into the chains or basket thru the top of the chain support or thru the side or bottom of the basket now will not count if the group or official sees that happen. This means wedgies, most which wedge from the outside, now will not count unless it was a blind shot where no one saw how the disc wedged. Putts that are observed to properly enter the basket from above the rim and then wedge trying to get out will count as holed out like before.

These changes for holing out mean calls for the “putting tree” photo shown below that was in the Rules School story on Interference need to be updated. Under the old rules, only the yellow disc would not have been considered holed out when the player removed it. Under 2011 rules, the white and red discs are holed out (IN). The yellow disc as before and the orange disc hanging on the nub outside the basket are NOT IN. The orange disc balancing on the rim, which used to be considered IN, is now considered OUT in the 2011 rules because the disc is not entirely supported by the pole, inner wall or bottom of the basket. The orange wedgie is now NOT IN if the group observed it wedge from the outside. If the group did not see it or watched it clear the top basket wire then wedge on the way out, it is IN. 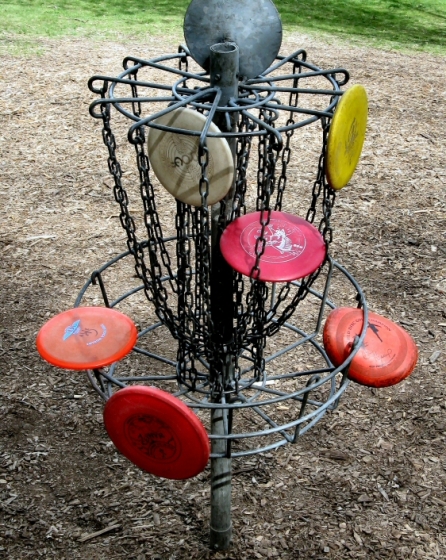 OPTIONAL RETHROW (formerly Unplayable Lie): 803.06
While changing the rule name seems cosmetic, it eliminates a potential double penalty that might occur when the 2m rule was in force and provides an alternate option for missed mandatories. Under the new Optional Rethrow rule, players who miss a mandatory now have the option to rethrow from their original lie instead of the Mando Drop Zone if they prefer.

Essentially, the Optional Rethrow means players may rethrow from their original lie if their disc lands in any of the disc golf penalty hazards – OB, Missed Mando, above 2m and Lost (which already is handled this way) – and receive a 1-throw penalty. Of course just like the old Unplayable Lie rule, a player may choose this Optional Rethrow penalty without permission from the group no matter where their disc lands whether inbounds or a hazard location.

OBSTACLES AND RELIEF: 803.05
Significant changes here. A player is not allowed to move any obstacle on the course with the exception of casual obstacles to a stance listed below. A player is allowed to request that other people remove themselves and/or their belongings from the player's stance or line of play. This includes spectators, umbrellas, golf bags, chairs, etc…

Casual obstacles as in current rules – casual water, loose leaves or debris, broken branches no longer connected to a tree, motor vehicles, harmful insects or animals, players' equipment, people, or any item or area specifically designated by the director before the round – can be moved if they are in the player’s stance or run-up, even if part of the item like a branch is in front of the lie.

If the casual item can’t be moved, like water or a bee hive, the player may take free relief up to 5m back on the line of play like before. If players require additional relief beyond 5m, they may invoke either the new Optional Relief rule (803.05C) and go back on the line of play as far as they desire with a one-throw penalty. Or, decide to declare the Optional Rethrow discussed previously and return to their original lie and throw again with a one-throw penalty.