Strategies for keeping your game tournament-ready 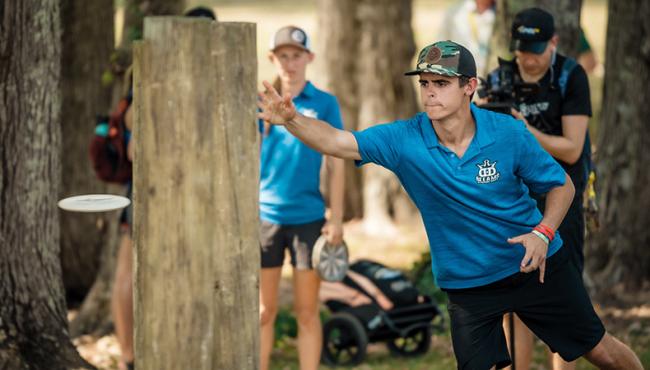 A.J. Risley offers his intentional putting practice as a strategy disc golfers can employ away from the course. Photo: Eino Ansio

The COVID-19 pandemic has upended life for many, forcing millions of people on stay-at-home orders to stop the spread of this novel coronavirus. And while it pales in comparison to the loss of life, staggering unemployment numbers, and broken social ties, disc golfers are still feeling the impact.

But when the time comes to return to the course, it’ll help to know that you’ve used this time to improve. So we called on a few top professional players, a disc golf fitness expert, and some of our staff to offer this series of strategies to keep your game sharp while you stay home. We hope it provides some form of relief and helps scratch the itch we all feel always, but especially now.

We’ll kick things off with the most important part of the game: putting.

This is the perfect time to get reacquainted that lonely hunk of metal in the yard you’ve been neglecting in favor of mashing drives in the field or playing full rounds: your practice basket.

Sure, practice putting can quickly become boring, but the short game is so maddeningly essential to the game that this shutdown is almost like free money. Just hit the circle for a few extra minutes each day, and it’s more than likely you’ll have an advantage over your buddies when league night resumes.

But what’s this progressive putting we mention in the header? Well, we like alliteration. Also, we see practice as a way to build from the bottom up using several available resources.

First, hit up our pals at UDisc. The official smartphone app of the PDGA recently rolled out updates to their platform that allow you to track your putting practice from several distances.

Once you’re comfortable there, move up to DGA and the Perfect Putt 360 app’s #PuttInPlace Challenge. All you have to do is challenge your own personal best score each week on Perfect Putt 360, share a screenshot on your social media channels with #puttinplace, and you’re entered to win swag from one of disc golf’s stalwart manufacturers.

After you’ve pushed yourself on two apps, it’s time to go live with the Global Pandemic Putting Challenge Facebook page. Now up to more than 3,000 members, the page requires you to go live from your phone -- no editing! -- and start putting from 20 feet. Keep going until you miss. It’s pressure-packed knowing that a couple thousand people can be watching, hopefully helping to emulate that tournament feel. From the casual backyard putts to the make-it-or-break-it social media sensation, we’re confident each step of this putting ladder will help you once we’re back on the course.

“But Steve,” you say. “I don’t have a basket in my backyard. How am I supposed to practice?”

Well, just like the kids out in the neighborhood chalking up driveways or seemingly every celebrity on TikTok, you’ll have to get creative. Luckily, PDGA Tour Manager Andrew “Big Dog” Sweeton has it in spades. From an email he recently sent to a member:

Even if you don’t have a target or a yard, you can practice putting effectively indoors as well. Here’s how:

Choose a doorway that is away from breakable items and provides some distance to back away from.

Hang a towel in the doorway.

Use a large bath towel or a beach towel folded lengthwise to about 20 inches in width.

Place a laundry basket below the towel to catch your putters when they fall.

Make up scoring games and hone those putting skills!

Even if you can only practice from about 10 ft away, once play resumes out on the course, you won’t have to worry about missing any more of those annoying short putts that should have been hole outs, but weren’t.

If you have a yard available, but no target,  you can do the same thing with a towel hanging on a clothesline and then practice even longer putts.

We asked Big Dog to share his setup with us, and since he’s working from home he was quick to oblige:

There are plenty of other ways to substitute for a basket, too:

Yes, we know these options don’t emulate the sound of a disc crashing the chains, which, if we’re being honest, accounts for about 87% of the satisfaction that comes with making a putt. But like everything else with the coronavirus, this is only temporary. And if you can take some time and hone in the muscle memory of your putting stroke, you’ll be crashing those chains more frequently when the time comes.

Settle Into A Routine

If there is one thing this dad misses the most about the days B.C. (before coronavirus), it’s a daily routine.

Get up. Coffee. Get the kid to school. Work, etc.

Now, both my wife and daughter are home, we’re aiming to be teachers while still tending to the nine-to-five and taking a breath between an ever-evolving news cycle. We’re fortunate for good health, but I’d be lying if I didn’t say I could use a step back into normalcy.

As much as this might not seem related to disc golf, it’s actually quite analogous. When I chatted with touring pro A.J. Risley, who got back on the road after a wrist injury only to have the season grind to a halt, he specifically mentioned how he is using this time to be more intentional with his putting practice.

While he’ll take some time for quantity putting -- that is, the style of putting practice listed above -- he’s putting an extra emphasis on quality putting. This means he’s literally only dropping in one putt at a time.

He does this with two discs in hand -- his main putter, and another that serves as a counterweight. He then establishes his routine -- three breaths, with each breath synced with a different body part he’s looking to engage -- before firing one putter into the heart of the chains. That counterweight putter, then, serves to hold him back.

“You have to fight the temptation to putt the one in your right hand and leave the other in your left hand instead of putting one then the other,” Risley said. “Really, on both of those putts if you do that you're lessening the effect of the lessons you learned.”

For Risley, the routine is what matters. He’s able to reset, mentally focus, and better emulate a pressure-packed tournament setting with this style. He thinks it translates to the rest of the course, too.

“What that whole practice and that process did for me is it really made me focus on my putting routine, which I think is what holds a lot of people back -- not only on the green, but on the teepad or approaches, as well,” Risley said.

And in a time where we can all use a little bit of structure, maybe employing it in your putting practice will help it trickle into other parts of your new daily existence, too.

Check back soon for the rest of our Stay Sharp At Home series, and be safe.