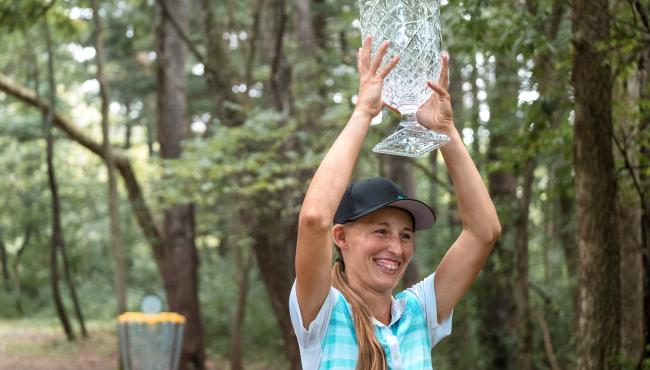 Paige Pierce held a commanding lead over the rest of the field with a 9-stroke lead coming into the round at Northwood Black on the final day of the Ledgestone Insurance Open.

Pierce continued her dominance at Northwood Black shooting a (-1) and total (-19), to win the Ledgestone Insurance Open title.

With Pierce having such a large lead, she mainly had to shoot a clean round and not be too aggressive, her (-1) round was a 989 rated round and wins easily with an 11-stroke win.  Pierce also leads the field in birdie rate (43%) and Circle 1 in regulation (47%).

In MPO, Kyle Klein started the final round hot going five for five birdies on the chase card at Eureka Lake.  Coming into the round only 4 strokes separated the top six players.  Thunderstorms were looming over the Peoria, IL region as a huge line of severe storms were heading towards Eureka Lake.  Tournament play was delayed due to lightning strikes in the surrounding area after 4 holes played on lead card.  The weather delay sent all tournament staff, competitors, and spectators back to safety and then with the storms never letting up, the round was cancelled.  According to PDGA rules, “Dangerous conditions at a PDGA sanctioned event may require a Tournament Director (TD) to consider the need to suspend play or outright cancel the remainder of the event.”

For MPO, due to severe weather and unsafe conditions, the results after round 3 is the official final score.  The Co-Champions of the Ledgestone Insurance Open with a total score of (-17) are Calvin Heimburg and Ricky Wysocki.