Glow Up: Tips For Playing Disc Golf After Dark

Glow Up: Tips For Playing Disc Golf After Dark 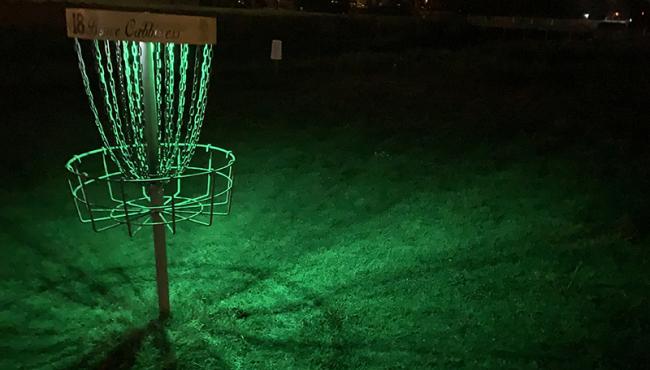 Glow golf gives you the opportunity to get in a much-needed midweek round. Photo: PDGA

Let's take a moment to think of all the new players that have taken up disc golf this year that are currently experiencing their first time change.

We all remember when we first started, disc golf was all we wanted to do. But then, all of a sudden and with little warning, the days started getting shorter and then bam, the time changed (for most of us) and the sun was gone by 5:30 p.m.

There's one way to cure that desire to get a midweek round in: Glow golf.

Here are some tips that were shared on the PDGA's Facebook on how to navitage the course at night:

"1) as much light on those baskets as you can get. Ideally a permanent solar powered LED... but glow-sticks or a flashlight in the bottom works.

2) 1 blacklight for every 2 people (little pocket sized ones)

3) really all you need is a midrange and a putter. If you are feeling fancy you can grab an over-stable and under-stable mid range and driver as well as a putter.

4) test your glow plastic before you go

6) start walking along the side of the fairway as soon as you throw your disc. Don’t get hit... but keep your eyes on the disc.

8) go to the dollar store and get some glow necklaces or inexpensive blinking lights to decorate yourself with.

9) every group of 4 should have a conventional flashlight

ALSO HELPFUL: Tips For Playing in the Cold

"Some of my best rounds have been played in the dark with lights taped to the discs. Not seeing all the obstacles can force you to trust your gut and put it on the line." — Hausauer R.

"I went the ratchet route. I spray painted a disc with glow-in-the-dark paint, then used a high lumen flashlight to charge the glow of the disc between throws. I could obviously putt normally." — Brennan F.

"I trained shooting free throws throughout sunset until dark when I was kid. That made me a better FT shooter, I try and translate that to putting." — Mike B.

"Minimize the ambient light. Flashlights, glow sticks, phones. Your eyes can't adjust to the dark if they're constantly getting a bunch of ambient light. Full moons are great too." — Matt P.

Be sure to check park hours and abide by all local rules and regulations.

Disc Golf, They Said It

I'll take LEDs, thanks. They keep flashing for hours - when I pick mine up from the fairway, I store it in my bag, still flashing. The MVP lights are about the size of a Band-aid, and are available from Amazon in several colors. Use a color that's close to your disc's for best transmission through the plastic, but go mostly with red, because red doesn't blow out your night vision. Wrap the light in clear packing tape. Wash, rinse and dry your disc. Tape the light to the bottom with enough coverage to seal out water. A set of lights lasts me all season. They add about 5 g to the weight, including your tape. If the disc was clean and dry when you stuck the light on, it will survive multiple tree hits, and keep right on flashing under water when you hit a puddle.

Neon color discs seemed best. I would also suggest head lamps instead of just flashlights. Just tried this for literally the first time last night and it was next level disc golf! I agree without seeing all obstacles in your way on a hole, you can trust your gut and fly true. Be safe with tree roots and other trip hazards. No one wants to miss time out on the courses due to an injury.