The Brasil Open: Ramblings on Growth and Culture from the Highways and Slipstreams of the World

The Brasil Open: Ramblings on Growth and Culture from the Highways and Slipstreams of the World

Brazil is a country of great and striking contrast. Across the crowded cities and sprawling countryside, the mansions creep up on the favelas, or vice versa, often separated only by a road or a containing wall. The jungle engulfs the habitation, and the churning sea of humanity breaks in crashing waves over coastal mountains and hills to leave ghettos that cling to near vertical planes through marvelous feats of ingenuity and the sheer structural integrity of the human spirit. From my hotel rooftop in Rio de Janeiro I spy both the beach of legend, the Copacabana, and right next to it, a hillside smeared with chaotic dabs of construction that at night light up like a tiny galaxy hovering right above the pavement, so close that you could almost reach out and snatch a star right out of the humid atmosphere.

But this is a story about disc golf.

Two odd hours outside of the highrise hubbub of Sao Paulo, the largest city in the western hemisphere, lies Piracicaba, a smallish city by Brazilian standards. As with many other things in Brazil, getting there without having even a smattering of Portuguese in your arsenal, may prove to be a tall task. Even for myself, as a polyglot armed with a fair bit of conversational Spanish, the path ahead is fraught with peril.

After my Uber driver delivers me into the maze of miscommunication that is the wrong Colinas do Piracicaba community, a rare wifi connection, and the tactically versatile tongue of Marianna Ferreira-Aulu, delivers me into the arms of the Issas, Rodrigo and Daniella, who, after an hour or two of general mucking about, take me to the more affluent of the two Colinas gated communities. And more importantly, the one were the disc golf course, reportedly the only one on the entire continent of South America, is located.

Rodrigo is the steward of the course, and the man who meets me at the tee is Michigander Tommy Walker, the first and only man ever to shoot and ace on the continent. 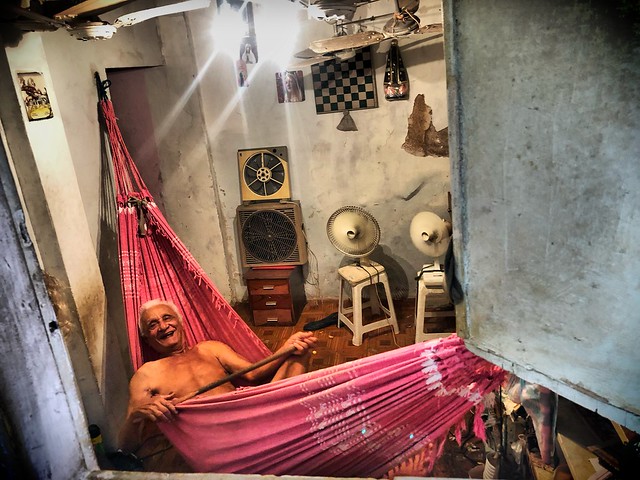 Mere hours before I departed from my hometown of Reykjavík, the call went out to all corners of the world that the Brazil Open would probably be cancelled. Now, 53 hours of travel after I slammed my front door, the fate of the tournament is still up in the air. But worries are a western construct, and here in the economic no mans land of the BRIC-block, we merely shrug it off and throw a low-flying hyzer line on Hole 1 that somehow still hits the low ceiling and sails straight into the muddy drink.

The late January temperature ceiling of southern Brazil seems to hover somewhere around the 40 degrees centigrade mark. And as I set foot on that first tee, the thermometer is bumping hard against that ceiling, while the ceiling over the green droops a little too low over the waterline to make the backhand line feasible. Especially so for a field from a developing country where discs are hard to come by and are, in relative terms, quite expensive.

Although the course is very well designed by the standard of being the only available one until hundreds of kilometers north of the equator, this problem persists on six of the eighteen holes.

Although both fun and challenging for the international visitors and the few locals that are well versed in the intricacies of frisbee flinging, amateurs throwing limited stocks of discs across murky bodies of water is not a recipe for the rapid and sustained growth of the sport. Nor is the location of the course, inside a walled and gated community populated by the one percent.

Another obstacle to the #growthesport hashtag is, reportedly, structural, and hence not solvable by simply installing a fresh course in a Rio de Janeiro or Belo Horizonte community park. That obstacle is, undoubtedly, the same one that caused the Piracicaba course to be installed inside a gated community.

As legend has it, if you build a public course in Brazil, or for that matter, anywhere in South America, it will quickly be vandalized, dismantled and sold as scrap iron, or both. I´ll leave it up to better informed minds whether this single issue is indeed the largest contributing factor (or if it’s even an actual issue at all) to the lacking success of our affordable and extremely accessible sport over an entire continent in general, and specifically so in the very athletically advanced country of Brazil.

But the deadline is getting late and I’m burning word count, so let’s wrap this up and put a neat little bow on it.

Despite tidings of cancellation, the Brasil Open went off with only minor hitches and lapses in organisation. I´m not going to delve too deep into actual tournament coverage here since, although this was the second ever PDGA sanctioned event in South American history, and the first ever billed as an Open, despite the valiant efforts of Tournament Director Adriano Medola, the outcome of a small tournament is not what’s at stake here.

What the Brasil Open is, and probably still will continue to be about across many future iterations, is the creation of glowing and everlasting memories for all involved. For it is those memories, and hopefully many happy returns of those involved, that ultimately will build and shape the foundation for the sport in Brazil and across the entire continent of South America for generations to come.

So good time were had, fun rounds were shot in the sweltering heat, and the Groppo family graciously provided us with their great summer house with a pool around 50 meters above the first tee that afforded much needed relief between rounds.

And yes, even on the opposite side of the world, Finland completely crushed both MPO and FPO, with Tapani Aulu reserving a spot in the history books as the first man ever to shoot better than 1000 rated on the continent.

Many thanks to the gracious hosts, the TD for all his hard work, and all the players involved, both international and local, as well as the PDGA for helping with the construction of this great course through the Marco Polo program and Innova Champion Discs for sponsoring the event. Hopefully I can afford to come back next year along with even more players that are willing to take the risk on such and adventurous trek. But now it’s time for Rio de Janeiro, Casablanca, and ultimately, a glorious week at the last bulwark against the charging Finns, the Open de España IV, which you can read about here.

Great Article, Bogi. And thanks everyone for all the support to our project in Brazil.

As a traveler frequenting the the craft beer culture of Brazil, I'll have to pack discs on my next visit. Nicely written Bogi, a real eye-opener!

Thanks for the article. Good stuff.

I do question the wisdom of putting a course around a water hazard in a country where you can't buy discs. ;)

My family lived in Rio from 1998-2008. I'm happy that a tiny seed of disc golf is growing in my favorite country. Hoping to get down there for the Brasil Open next year if they have it again.

And yes, a public course would not work. Baskets would almost certainly be stolen. The gated community approach works best, but sadly puts the sport out of reach of the masses. The growth of the sport will require long-term patience and work since frisbees just aren't much of a thing down there. Can't remember ever seeing anyone throw a disc. . .even at the beach.