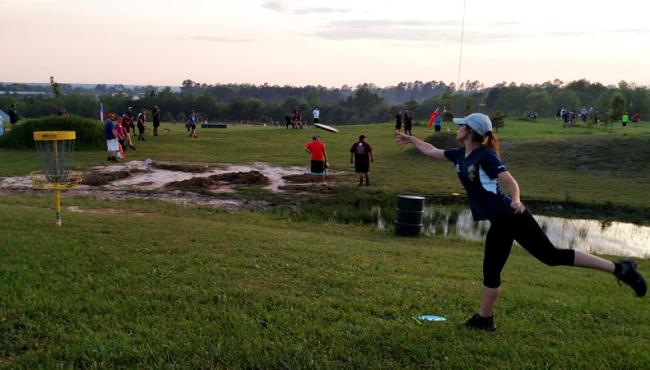 Wire-to-wire winner of the Women’s Flight (Singles), Bayli Miller of CSUMB, putting on “The Mean 13” during the singles final round.

After three longs days that included four doubles rounds and two singles rounds, the standings for the 2017 National Collegiate Disc Golf Championships are no longer left to the imagination. Because of the way the event is set up, where all singles scores are included with all the doubles scores to produce the overall team score, the official Championship Flight team rankings were unknown throughout the week as the tournament progressed. However, when the last card was turned in for the afternoon round on Friday, we had everything we needed to not only calculate the overall team scores, but to determine who made the cut for the singles final round, which took place shortly after.

The singles finals included 29 men from the Championship Flight and all nine of the ladies from the Women’s Flight. 24 teams were represented in the finals out of the 43 competing in the NCDGC, with all competitors playing a modified 13-hole version of the Dunipace Dunes course, designed by Pete May and nicknamed “The Mean 13”. Teeing off at 6:00pm, it was as much of a race against sunlight as it was a race between individuals.

In the Women’s Flight, CSUMB’s Bayli Miller took the lead after her first singles round on Thursday afternoon, finishing four ahead of Oregon’s Reily Warren. Reily closed the gap to just three after the second singles round on Friday morning, creating a bit of drama with only the final round remaining. In the end, Bayli held strong and took home a wire-to-wire win to become the 2017 NCDGC Women’s Individual Champion, finishing with the hot round of 49 during the finals.

The sun was already setting during the singles finals with a few holes still remaining.

Of the 29 men that made the cut for the Championship Flight singles finals, not a one was safe. The scores were simply too close for anyone to feel comfortable with the gap between their score and the next. Only nine strokes separated the top of the lead card from the bottom of the last card. On a course that was designed to be “mean”, figuratively, anything could happen.

NC Charlotte’s Travis Chumley teed off at the top of the leaderboard after throwing a blazing 48 (-12) on the Hogback course hours earlier and held on to the lead for the first few holes of the finals. NC Charlotte’s Colin Carter was on his heels throughout the round, and eventually passed him on the 7th hole, taking the lead with only six holes to go.

As the players pushed on with the sun quickly sinking below the horizon, CinCinnati’s Ben Clark, playing from the third card, was making his move. When Clark teed off, he was five strokes off the lead. By the time Carter had taken the lead from Chumley, Clark had narrowed the gap between himself and Carter to just three. Clark gained another stroke on hole 9. Then another on 10, and another on 12. Clark stayed inbounds off the tee of 13 to take an easy par, carding a 35 for the round (-5).

Carter was aware of the run Clark was making, assuming it was tied as he teed off on the last tee. In nearly total darkness, he teed off with a backhand down the hill of hole 13. Unfortunately, the disc faded out quickly and landed outside of the OB ropes. It was a hard-fought battle, but Clark’s round of five under par against Carter’s even par meant he would be crowned the 2017 NCDGC Individual Champion.

With only a couple of weeks remaining until the start of the event, the 2015 and 2016 NCDGC Women’s Team Champions of CSUMB were the only registered team. If they were going to have anyone to play against, it was going to happen at the last minute. Thankfully, three women from the University of Oregon made that a reality. And shortly after, two women from Portland and one from East Tennessee signed up as well. Portland and East Tennessee however, would not be eligible for the team title, as at least three are needed for a team to be eligible.

It was a two-horse race, with the emphasis there being on the word “was”. In an unfortunate turn of events, Oregon’s Emma Browning was forced to withdraw from the event after finishing her singles round on Thursday afternoon. This left Oregon with only two players, making their team ineligible for the team championship, and therefore giving CSUMB the win by default. Keep in mind, a comeback win for Oregon was likely out of reach by that point anyway, as CSUMB was already ahead of Oregon by roughly 30+ strokes with the remaining rounds to go.

CSUMB is now the first team to ever have three NCDGC team titles, and what’s more impressive, they pulled them off as a three-peat. Congratulations to the CSUMB Lady Otters, the back-to-back-to-back NCDGC Women’s Team Champions!

After adding up four rounds of doubles scores and eight rounds of singles scores (four players X two rounds each), 2015 NCDGC Team Champions, Ferris State University, will tee off as the leaders for one last round on Old Glory, looking to take their second NCDGC team title back to Michigan. Team Captain Sam Mrdeza is the only one of the 2017 Championship Flight team members that also competed with the 2015 Championship Flight team, where Ferris State edged out Nevada-Reno on the 4th hole of a sudden-death playoff.

If you haven't seen the amazing photos by Bob Carey from the NCDGC yet, you're missing out. Find him on Instagram at @BobCarey. Photo of Ferris State Bulldogs' Sam Mrdeza.

They’ll be grouped with North Carolina-Charlotte, playing the unique best shot team doubles format they’ve been playing all week with a five-stroke head start. Arkansas State and Wisconsin-Platteville make up the chase card, seven and 11 strokes off the lead, respectively.

The First Flight and Second Flight teams are already on the courses competing for their titles. The Championship Flight teams in 11th-32nd place all tee off at 11:30am EDT via a shotgun start on Old Glory, and the top ten teams all have tee times between 11:45am and 12:45pm, with the leaders teeing off last, per usual.

Follow the action today on pdgalive.com for scores, updates, pics, and videos starting around 11:30am EDT. Who will be your 2017 NCDGC Team Champions? Only time will tell. Stay tuned!