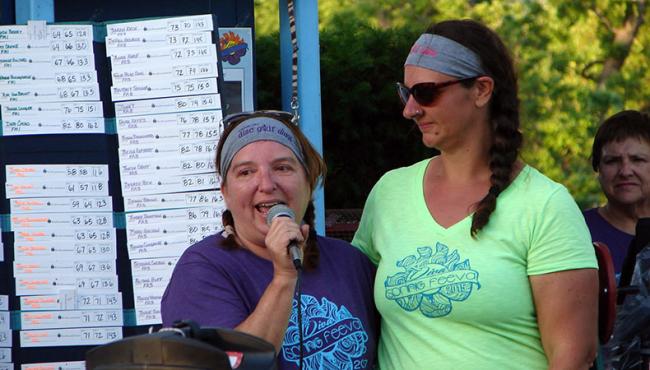 Nearly 2,100 players will take part in this weekend’s PDGA Women’s Global Event, a new record for the biennial celebration of women’s disc golf. When cards are set and “two minutes!” is shouted from Australia to Appling – and everywhere in between – the loudest calls to begin play will likely come from the Midwest, where the KC Diva Spring Feeva will supply almost seven percent of the event’s total participants.

At 137-strong, the annual women’s-only event is the largest on-tap for Saturday’s festivities and embodies the continued growth and pioneering spirit of the WGE. With 70 women comprising the Intermediate, Recreational, and Novice divisions, as well as 14 Juniors and 37 non-PDGA members, it is able to attract players from all across the spectrum of women’s disc golf with live music, mimosas (sparkling apple juice for the young women), and – of course – fun.

It’s a long-term labor of love for Rhonda Crosby, who started the Kansas City Disc Golf Divas in 2011 and has directed the Spring Feeva since 2015. Inspired by the activities and camaraderie she experienced at events like the United States Women’s Disc Golf Championship, she brought the good vibes home with her to the Midwest and started just like any other club: one person at a time. Now, it’s up to 20 regular players on any given week.

“That’s one of the most common questions I get about starting a women’s league,” Crosby said Thursday amid preparations for the weekend. “It’s like, ‘Patience, grasshopper.’ Be consistent. Show up, even if you might be the only one there.”

Crosby clearly doesn’t have that problem anymore. The Spring Feeva filled up its initial offering of 90 spots in four days when registration opened in January, which created multiple-division waitlists. It was a good problem to have, as was another: Past iterations of the event were held at the now-defunct Swope Park, which meant the event moved across state lines to Rosedale Park, which boasts two courses. Though Swope held traditional, sentimental value, the change in venue presented the opportunity to welcome more players. As a result, this year will find an A and B pool playing an amalgam of Rosedale’s upper and lower tracks, which helped accommodate the larger field.

“I think a lot of it comes from we always advertise our event as a beginner-friendly event, and that is why our novice and rec field is always the biggest,” Crosby said.

While women’s participation is overflowing in Kansas City, it has started to spill over into other nearby metropolitan areas. Crosby pointed to the formation of the Heartland Women’s Disc Golf Series, which started in 2017 with the Spring Feeva and events in Wichita, Kansas, and Omaha, Nebraska. The 2018 circuit grew to include the Ankeny Ladies Classic and Junior Classic Weekend in Iowa and the Columbia Women’s Classic in Missouri.

“We were seeing, consistently, certain states’ regions coming to Spring Feeva every year, so we wanted to take that and maybe start planting some seeds in some areas to get leagues going and some women’s events,” Crosby said. “That has worked well.”

Alison Wiley has come to the Kansas City event each year it’s been held and ran the Ankeny Ladies Classic in April. That tournament saw 35 women and 17 juniors take to the course just outside Des Moines, and Wiley said she hopes to add some of the touches from the Spring Feeva in the future. Like Crosby, she also drew inspiration from her experiences at the USWDGC.

“The idea of new players and being open to all skill levels is super important with a women’s-only event,” Wiley said. “…It was brand new to see everything from the novice women to the pros being on the course at one time and watching each other and learning from each other.”

But the beginner-friendly ideals of a women’s-only event means there is plenty of lighthearted fun to be had, too. The CTP marker at Spring Feeva, for example, is now a banana, after a snafu with CTP flags last year found one competitor marking her shot with fruit. Tuxedo t-shirted male volunteers greet every player with flowers and that delectable champagne-and-orange juice concoction upon completion of their second round, an homage to events like the Nike Women’s Half Marathon where firefighters present finishers with jewelry.

And as much as every WGE is about bringing more women to the sport, Crosby was sure to acknowledge the support of her husband, Ben, and the many men who line up every year at the Spring Feeva to caddie and help make the event run smoothly. “All of the women are playing, so of course most of our volunteer staff are men,” Crosby said. “They come out in droves and are totally supportive.”

Still, they’re outnumbered by the ladies. So from the first stretches of sunrise yoga until the final putts fall, they match the infectious enthusiasm that will be felt worldwide.

“To see this excitement for these brand new women to the sport…The excitement is in the air,” Wiley said. “It’s very exciting.”