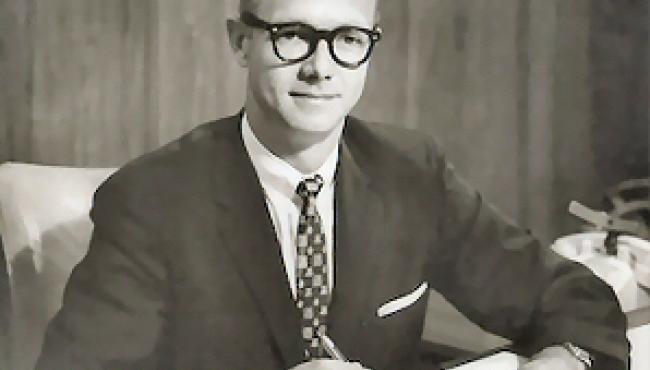 Our founder, Steady Ed Headrick, perhaps pondering, "Should a disc landing on top of a Pole Hole® count?"

Rules. There's nothing more fundamental to any sport. Rules define the game. The first time someone challenged a buddy to see how many Frisbee® throws it took to reach that tree in the distance, we had our first disc golf rule.

Quite a few more rules have been added over the years to define both the recreational game of disc golf and the competitive sport of disc golf. Fundamentally though, the idea remains to get the disc into the baskets on the course in the least number of throws. Have you really been playing disc golf or just throwing a disc at baskets? If you haven't been following the rules, or maybe playing by an older version of the rules, maybe it's time to take a closer look!

The history of the DGA recreational rules from 1978 before the PDGA (see picture below), and the six PDGA rules versions from the first in 1982, then 1986, 1990, 1997, 2002 and 2006 (the current version) have been posted on a new page on the PDGA site here. Starting in the 1986 version, new rules added are highlighted in red. Text where the concept or wording of a rule was changed from the previous version is blue. This will help track changes that have been made over the years. Also a table was produced that shows the new disc golf terms added over the years like Provisional and Drop Zone. In addition, there's a comprehensive timeline chart that shows the significant highlights of rules changes from version to version. The chart really shows how we progressed to our current rules today. 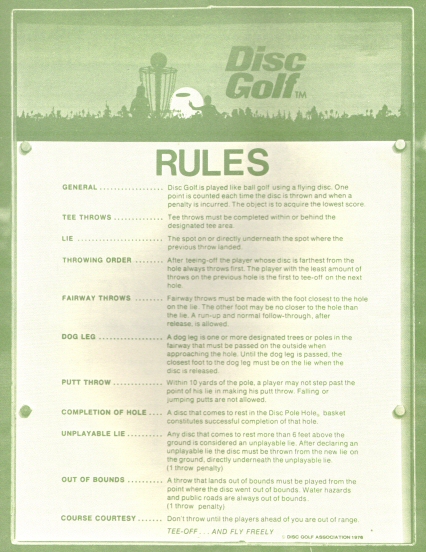 A project like this is bound to produce some interesting information nuggets. some trends can be observed. One current issue that required a rules waiver for the USDGC was already solved very simply in the 1990 rule book. The savvy tour players have heard about or used what's known as a free "mulligan" when someone slips on the tee pad and knows they've yanked their drive. They can call a foot fault (even when it's not) and there's a reasonable chance they'll get a "second" from someone in the group. They simply get a warning and a re-tee just like a mulligan. However, the foot fault rule in the 1990 rule book did not allow a player to call a foot fault on their own throw but were allowed to second a foot fault call first made by another player in the group; thus, no free mulligan possibility. The Rules Committee may want to consider that in the next update.

One trend starting from the 1982 rule book is the gradual separation of sections specific to rules of the game with those needed for running events. The 1982 book had many of these rules blended together. By the 2006 book, even the player classifications were shifted into the growing Competition Manual. For the next rules edition, the tournament rules will almost completely be moved from the rule book into the Competition Manual even though they may be printed in the same book to keep them together. With the PDGA providing rules for the sport globally, it makes sense to have the basic rules of the game kept separate because different organizations and countries may have different traditions and approaches to what rules are appropriate for their competitions.

Another trend has been the gradual reduction in penalties on how the game is played, with increasing penalties for judgment calls and behavioral issues. In the early years, the penalties were pretty harsh for infractions like being late turning in a scorecard or carrying an illegal disc. The maximum distance your plant foot could be from the tee line on release when there wasn't a tee pad went from 12 inches in 1982 to 1 meter, to 2 meters, and eventually 3 meters by 2006. Scoring errors cost you 3 throws per each throw in your favor in 1990. That was especially painful for a buddy who told me a story where their group had played 27 holes at an overalls event. They all entered their scoreson the card in relation to par for 18 holes and each got a 24-33 shot penalty. 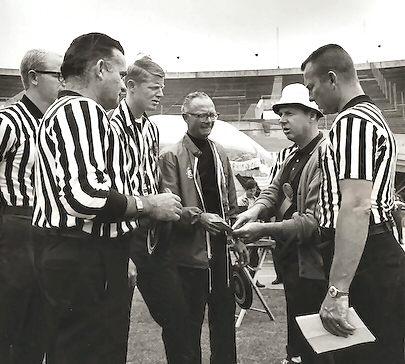 Steady Ed going over the rules with "zebras" at an 80s Overall event. It took another 20 years before we budgeted for "polo shirted" marshals at our major disc golf events.

Throwing another player's disc or from their lie could literally bring the tournament to a halt in 1982. The rules required the group to stand aside until an official was called to sort things out. The penalty was 2 throws for each throw the player made from the wrong lie. Then, once the error was discovered, the player went back to their correct lie and played from there plus adding all of the penalties. Now, the error might cost a player just 2-throws and no official is required. Compound penalties were possible until 1997 where a player could get penalized one throw each under both the 2 meter rule and OB if they landed high in a tree in OB territory. And if that was on the wrong side of a mando, it might take two more throws to get back to the correct side of the mando to unwind. Until 2002, you never really missed a mando. You just had to wind back around the mando tree and pass it on the correct side no matter how many throws it took.

There's wealth of information in these older books that will hopefully help our Rules Committee improve our PDGA rule book during 2010. One of the tasks will be to integrate many of the Rules Q&As that have been produced over the past several years to handle issues that have arisen since the 2006 update. Another big task will be to shuttle rules over to the Competition Manual related to tournament play and make sure the wording in the two books tie together properly. If you come across our Rules Committee members, Conrad Damon (chairman), Dr. Rick Voakes, Harold Duvall, Jim Garnett, John Chapman, Peter Bygde and Shawn Sinclair, please 'Thank' them for their ongoing volunteer efforts to help us learn to play the current definition in our evolving sport of disc golf.