The History of the Ice Bowl

The History of the Ice Bowl 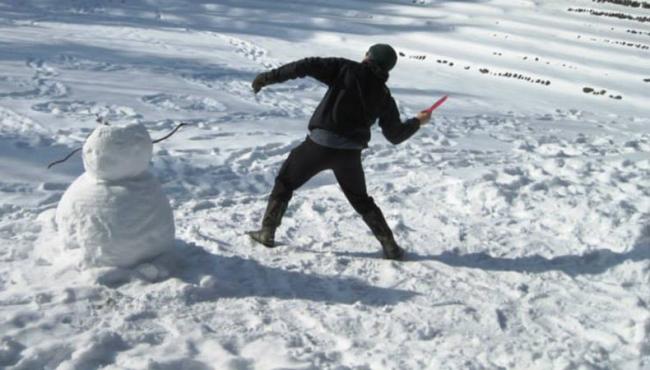 Whether you’re a year-round competitive disc golf addict or a casual once-a-month type of player, you’ve probably heard someone mention an “Ice Bowl”. But what is an Ice Bowl exactly? At first glance one might think it’s just a common name for a disc golf tournament that takes place in the heart of winter. And that wouldn’t be an inaccurate observation by any means. However, Ice Bowls are much more than just a good time on a course in the frigid cold (or not so cold, depending on the region).

What is the Ice Bowl?

Let’s start with the true definition of the Ice Bowl taken from the official Ice Bowl HQ website, created and maintained by current PDGA board member and Ice Bowl founder Rick Rothstein #2458.

"The Ice Bowl is a collection of disc golf events that are held each year in January and February with an overall mission of raising funds to fight hunger. Related goals include having fun and connecting the disc golf community in a positive way to the community at large."

That’s right folks. An Ice Bowl, by definition, is a fundraiser event with the overall goal of raising money to help feed those that don’t have the means to feed themselves. This means that money raised from the event should go towards local food banks, food pantries, and/or larger multi-faceted charities that have feeding the hungry as one of their missions. One example would be the upcoming IDGC Ice Bowl at the International Disc Golf Center right here in Appling, GA. Money raised by that event will be put towards the Golden Harvest Food Bank in Augusta, GA.

The policy of putting the funds towards fighting hunger has held true over the years for the most part, but it did change ever so slightly in 2001.

"After the 9-11 tragedies, Disc Golf World started to allow Ice Bowls to raise money for charitable purposes other than just fighting hunger. Two years ago, Disc Golf World trademarked Ice Bowl® to better ensure that tournaments using the Ice Bowl® mark for their events would raise funds for charities consistent with the goals of Ice Bowl. Today, the emphasis continues to be on having fun, raising money for local charities (ideally for fighting hunger), and garnering upbeat local publicity that integrates the disc golf community with the community at large in positive ways."

As disc golf has grown over the years, so have the amount of Ice Bowl events. As more and more players began competing in these charitable tournaments, the amount of money and corresponding pounds of food raised for the fight against hunger has been nothing short of astonishing. This is data taken from the Ice Bowl HQ website. The full Ice Bowl History PDF includes many more details such as the snowiest events, the coldest events, the events that raised the most money, etc.

The 2013 Ice Bowl set a new fundraising record for a single year, generating more than $311,000 in donations, bringing the grand total to just over $2.5 million. Keep in mind that total doesn’t even include the nine years of events prior to 1996 when historical data on cash and pounds of food wasn't being kept! An event in Arvada, CO brought in the most money in 2013, boasting a $15,271 donation to the Food Bank of the Rockies.

The original motto of the Ice Bowl was “No Wimps. No Excuses.” Although it has since been changed to “No Wimps. No Whiners.” thanks to the Indianapolis Disc Golf Club, the mentality has always been the same. Ice Bowl events are about playing disc golf, having fun, and helping people, with Mother Nature being ignored regardless of the conditions.

Rick Rothstein put the first event together in Colombia, MO back in 1987. His idea was to get people out to play on the Sunday before the Super Bowl so that no one would have to miss any football. Despite the 5” of snow on the ground, 34 disc golfers took to Albert-Oakland Park and had a blast. The local media even came by to get some photos and statements for an article that was later published in the Sports section of the Columbia Daily Tribune.

Rick had no idea that his local event would grow into something so incredible. The Ice Bowl is now an international annual fundraising event that has raised over $2.5 million in donations with many of the events being some of the most fun of the year for the locals that dare to participate. The history of the Ice Bowl can be seen in full detail in the History PDF on IceBowlHQ.com.

Several Ice Bowl events have already taken place in 2015, but there are still several more coming up, with a total of 231 total officially registered so far. The good news is, there’s still plenty of time to register an Ice Bowl in your area! The event must take place no later than March 1, 2015 to qualify. All you need to do to get started is check out all the information on IceBowlHQ.com. The FAQ page is filled with resources to help get you started. Help 2015 set a new Ice Bowl fundraising record!