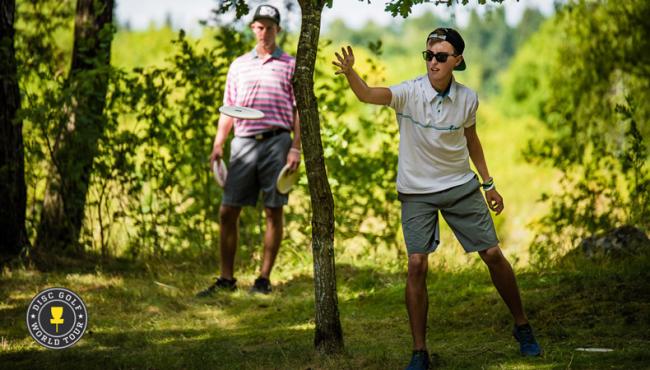 Just when we thought the 2016 European Masters couldn’t get any more exciting, the fight for the top of the leaderboard got even closer as round 2 drew to an end. The quest for the title will mean not only a win on the Disc Golf World Tour, but a win at a PDGA Major as well.

As the afternoon progressed, all eyes were on the lead and chase cards as they prepared to tee off. Ricky Wysocki #38008 (USA) began the round as the overall leader, two ahead of Paul Ulibarri #27171 (USA), three ahead of Nate Doss #11794 (USA), and four ahead of both Eagle McMahon #37817 (USA) and Zach Melton #38631 (USA). Gaining ground on Ricky Wysocki is no simple task, and catching him is nearly impossible when he’s playing well.

Getting tighter from the start 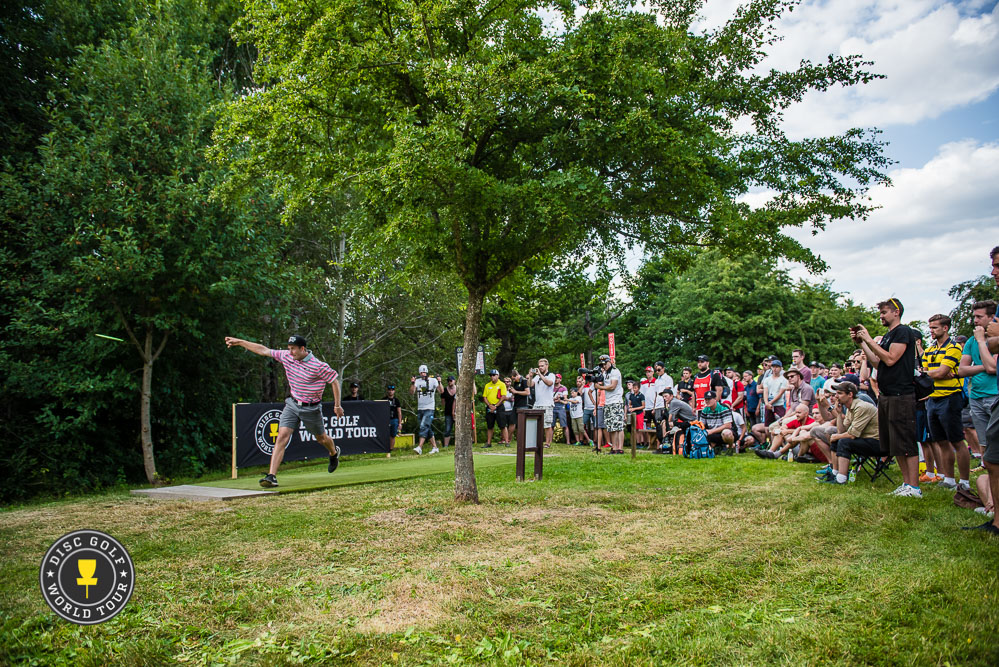 Ricky Wysocki and Eagle McMahon battled head to head from the start today.

Wysocki began the round with back-to-back pars, opening the window of opportunity for both Ulibarri and McMahon, who started birdie-par and birdie-birdie, respectively. An unshaken Wysocki followed it up with birdies on Holes 3 and 4 hoping to make up for a slow start, but Ulibarri and McMahon matched him stroke for stroke.

Video: Ricky Wysocki had to do work to save his par on hole 1. 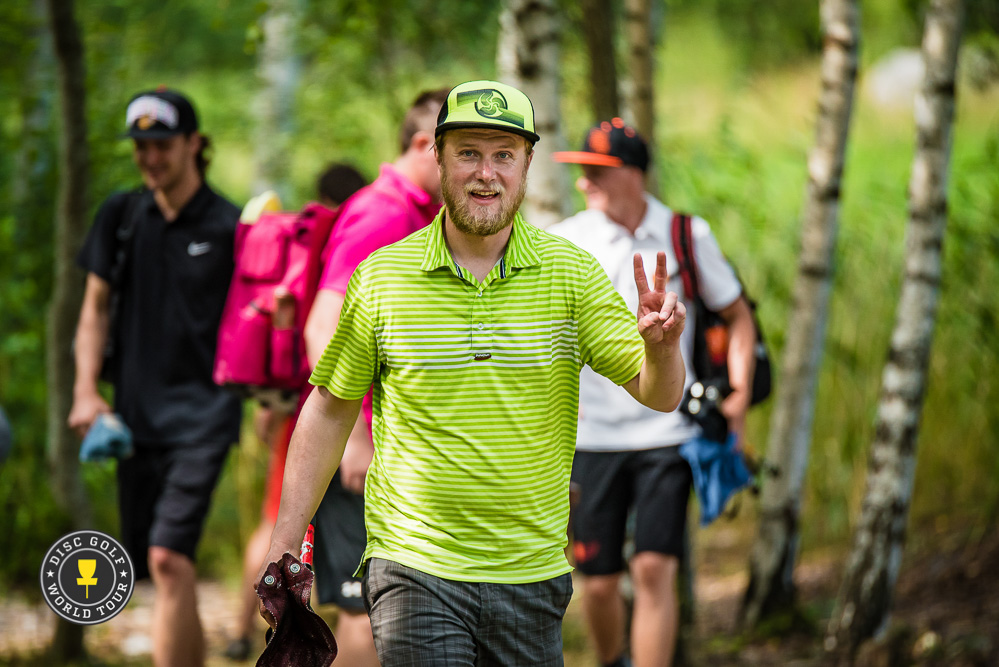 KJ Nybo’s years of experience showed on the course today.

While the lead card was battling for the lead, Denmark’s KJ Nybo #28903 was making big moves from the third card. KJ was one of six that started the round at four under par after Round 1, but he was one of just two players on the course today to finish in the double digits under par. KJ played nearly perfect golf, finishing the front nine at five under par and following it up with a bogey-free back nine of five under par as well.

Video: KJ Nybo’s finishes with a strong birdie on hole 18. 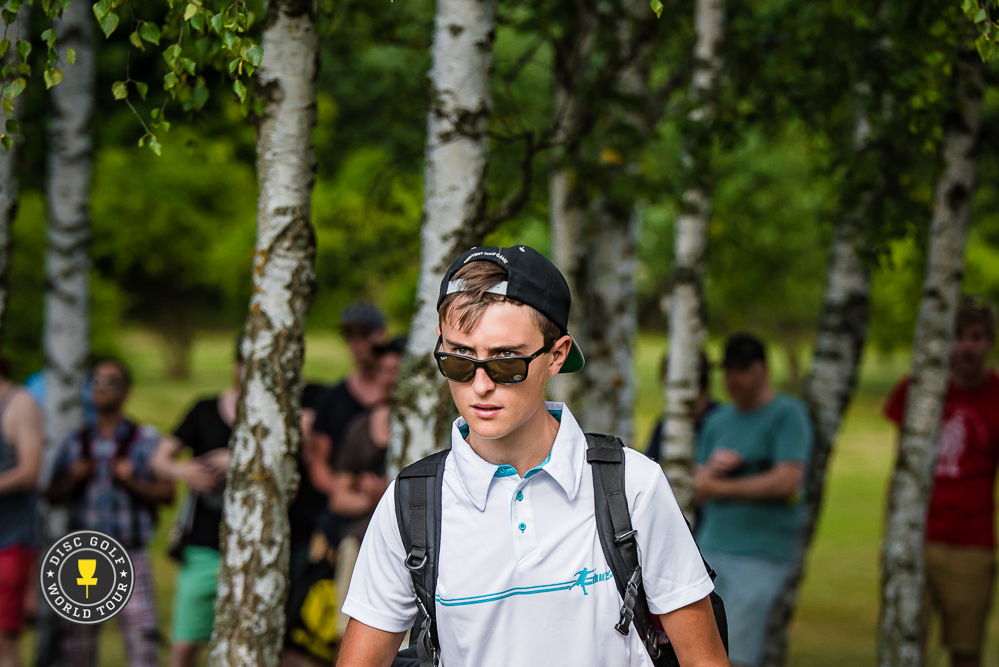 The 18-year-old Coloradoan sensation Eagle McMahon holds the new course record with his -11 for round 2.

The second player to finish double digits under par was the young gun with a huge arm, Eagle McMahon. McMahon bested KJ’s round by one to finish at 11 under par, the hot round of the weekend, unofficially rated at 1075! His bogey-free round score of 52 began with five straight birdies to start the round, leaving him just one stroke off the leader, Ricky Wysocki, heading into the final round tomorrow.

Video: Eagle McMahon with a perfect birdie on the island hole 5. 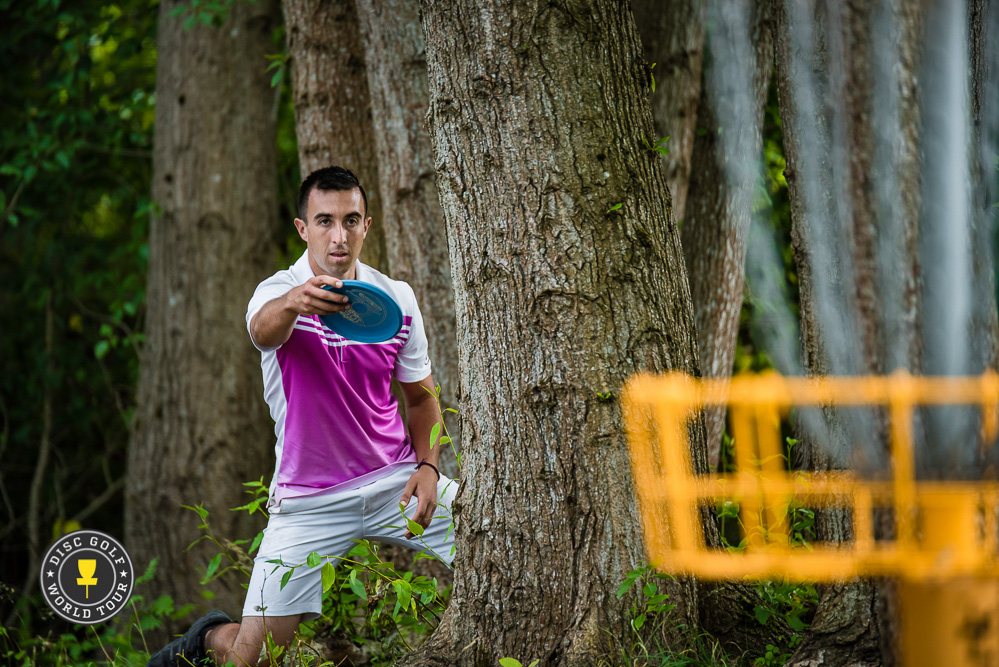 Defending European Masters Champion Paul McBeth #27523 took advantage of “Moving Day” as well, finishing the round at nine under par with a bogey on the 205 meter (672 feet) Hole 13 that kept him out of the double digit club. The back nine is where he really made his move, carding birdies on every hole except the previously mentioned Hole 13, and a par on Hole 15.

Koling climbs up the scoreboard 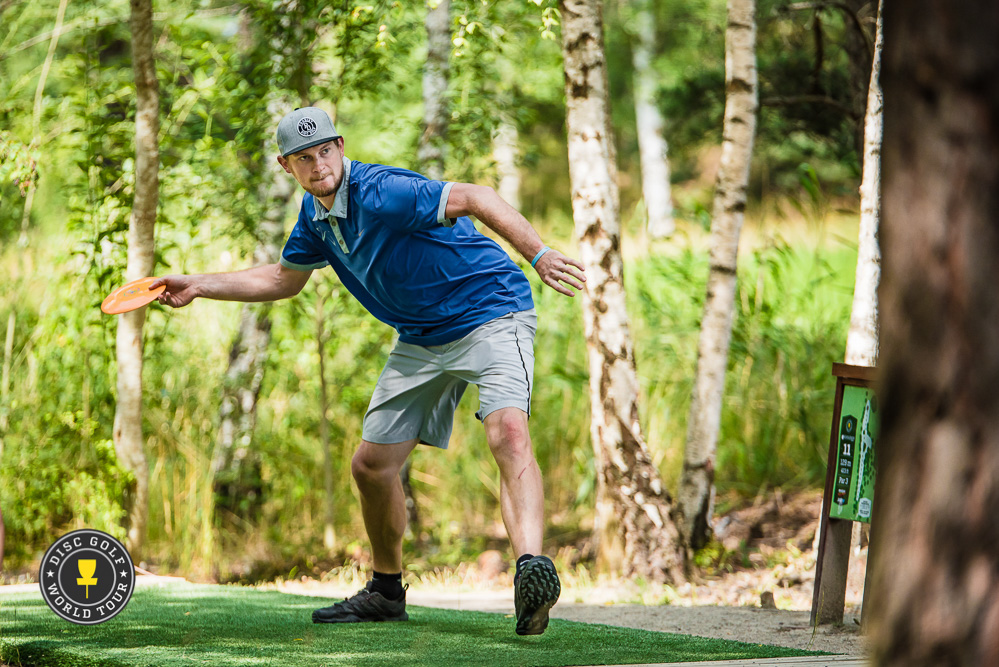 Jeremy Koling had the perfect finish for his moving day round.

Perhaps the biggest “Moving Day” jump in the rankings today came from USA’s Jeremy Koling #33705, finishing the round with a 1053-rated eight under par to jump all the way from the 12th card up to the 3rd card for tomorrow’s final round. In his last three holes of the day, Koling went four under par, including an amazing eagle on Hole 16, a 190 meter par 4 that plays sharply downhill, similar to the "Top of the World" shot at DeLaveaga. 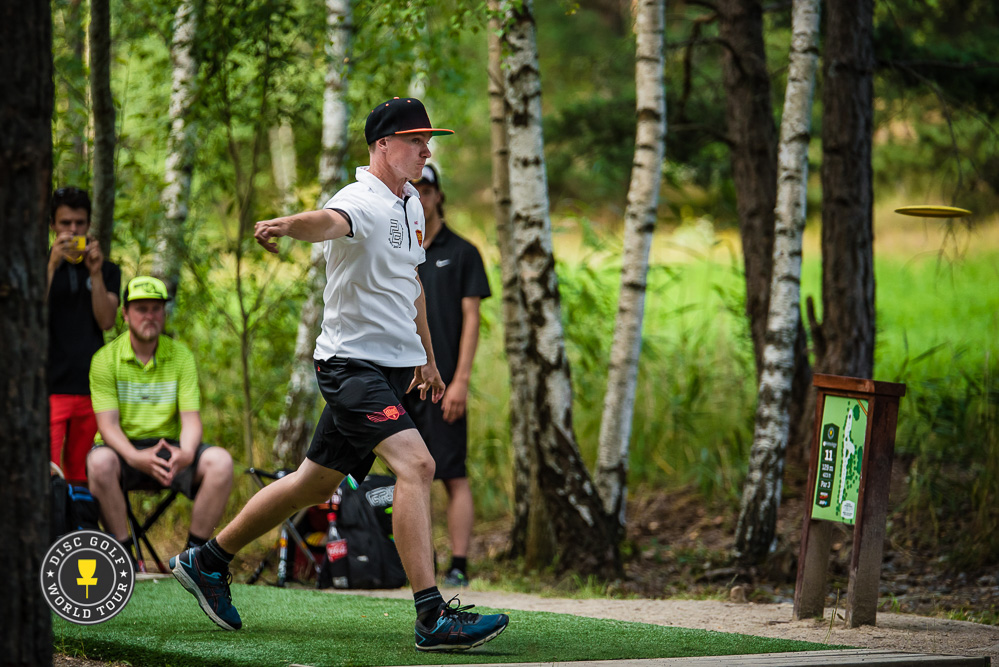 Leo Piironen improved his round 1 score by 2 on the 2nd round.

KJ isn’t the only European that made moves this afternoon. Finland’s Leo Piironen #36099 has now cracked the top 10, following up his first round of three under par with a two stroke improvement to leave him eight under par overall, tied with USA’s Zach Melton for 9th place. Sweden’s Tobias Johansson #54111  continues to play well, now sitting tied for 11th place Jeremy Koling at seven under par. They will be playing with both Melton and Piironen tomorrow on the 3rd card. 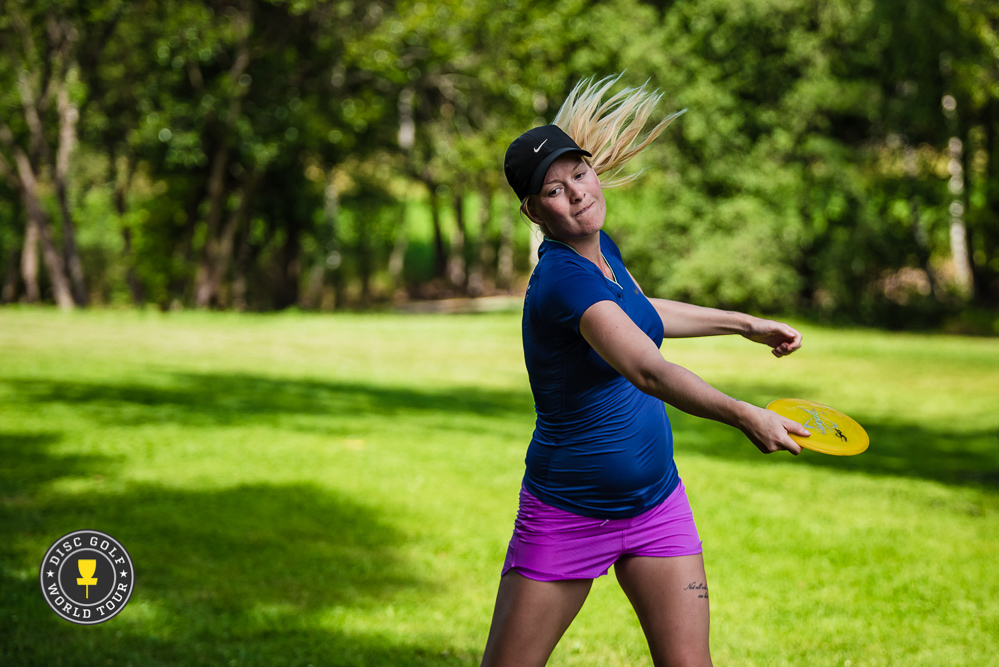 The local favourite, Ragna Bygde #8559, continues to play fantastic disc golf despite being five months pregnant, sitting at the total score of three over par after shooting a 64 for Round 1 and a 65 for Round 2. She knows the course well and she is showing it, staying ahead of 60 percent of the entire field, 98% of which are men.

Only one round to go! 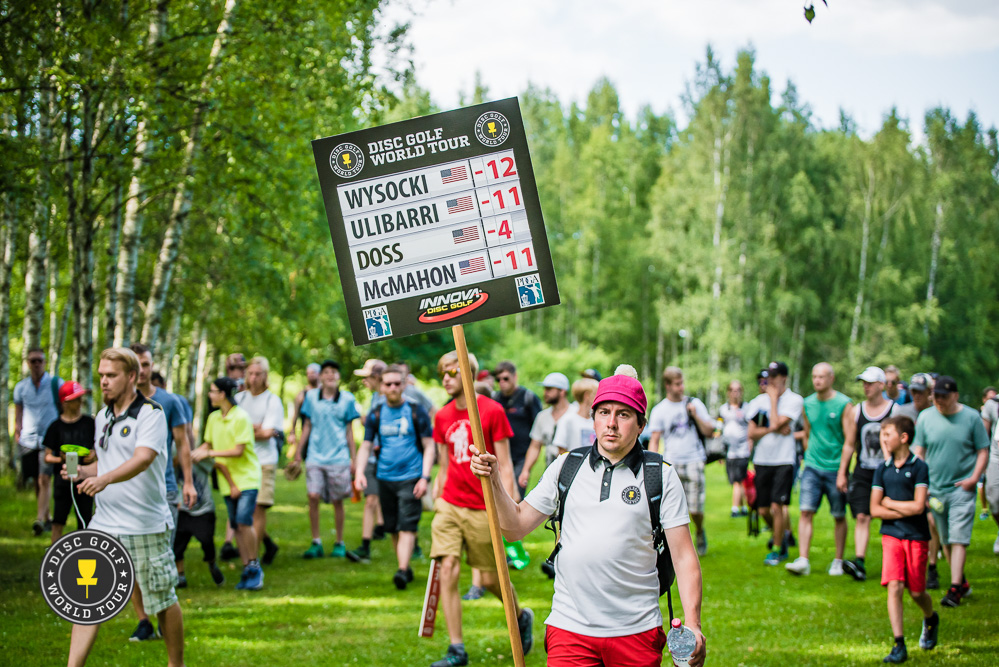 The biggest crowds were following the 1st and 2nd cards. Pictured: Lead card standings after the first 8 holes of moving day.

We have quite the battle on our hands with only one round to go at the European Masters, the 4th stop on the Disc Golf World Tour and the only PDGA Major in Europe scheduled for 2016. Will Ricky Wysocki be able to hold off the competition? Only time will tell.

Richer media than ever

Luckily, there are numerous ways to follow the developments here at Järva DGP thanks to the tireless efforts of our media production crew. In the months leading up to the Disc Golf World Tour, founder Jussi Meresmaa made the claim that his events would have a heavy focus on media and exposure. Event after event, he has proven to be a man of his word. As the 144 competitors took to the tee here at the always amazing Järva DiscGolfPark in Stockholm, Sweden this morning and afternoon, a production team of a dozen plus worked behind the scenes to make sure the world knew about it.

It’s not all about the disc golfers

On top of having graphic designers and content managers on site, there are also three camera crews, four video editors and a social media team working together to provide as much media as possible in the highest possible quality. And they’re not just pandering to the disc golf crowd. They’re doing everything they can and taking advantage of every media outlet possible to get the local community involved as well as the general non-disc golfing public.

Recap on the moving day action!

Video: Zach Melton shows how to get the birdie on hole 11.

During round 2, our social media team was for the most part following the top 2 cards. As a result, you can find a lot of photo updates, as well as hole-specific play-by-play videos from the DGWT Instagram account.

We also have The SpinTV production crew piecing together a wrap up show to be released later tonight. The show will feature select plays from the moving day round, as well as player interviews and Disc Golf Metrix analysis by PDGA Executive Director Brian Graham. Stay tuned for the show this evening and while you’re at it, check out the Round 1 Wrap Up Show below:

Click on the picture to see the full Round 2 scores!

We also highly recommend checking out the leaderboard and Metrix and course stats from round 2. As a new feature, the DGWT team linked their Instagram live update videos to the Metrix scoring page, so you can see how those strokes added up on the course. Just click on those little red play signs to watch the videos!

The majority of the Metrix stats are available for registered users only, so make sure to register here if you haven’t already! And if you’re in luck, registering may pay off in a big way, as we’re giving away a limited edition DGWT Grip Equipment bag among our followers after the event.

There’s still plenty of action to come, so make sure to check back tomorrow for the European Masters final round, a PDGA Major Disc Golf Event and the fourth stop on the Disc Golf World Tour!