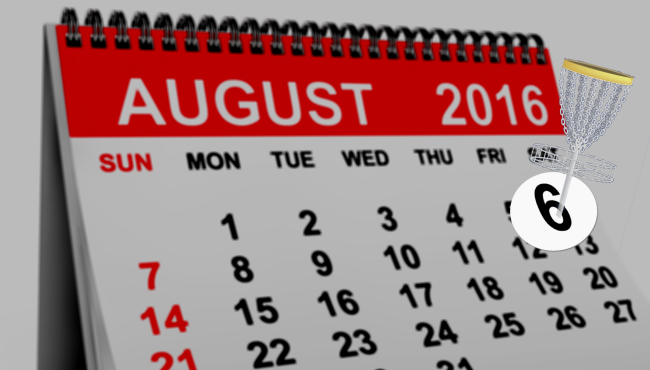 How many times have you listened to the radio and heard the DJ talking about how today is “National Junk Food Day” or “National Tape Measure Day” or “National Pet Fire Safety Day”? Those are all real National Days by the way, all of which are from earlier this month. So, why not a "National Disc Golf Day"? Surely there are as many disc golf enthusiasts as there are tape measure enthusiasts right?

It’s an idea that’s been tossed around for years. A day that every disc golfer, from recreational to professional, can celebrate and share their love of our great sport. It’s an idea that's been bandied about for years by members of the PDGA Board of Directors, casual golfers, and anyone and everyone in between. But ideas are cheap. It’s actually making it happen that counts. And now, thanks to the hard work of PDGA Minnesota State Coordinator Jason Wilder #17523, former PDGA Memberships Manager Sara Nicholson #33589, and several others, the first Saturday in August will be known henceforth as National Disc Golf Day!

“I’ve noticed a stronger push from [National Day Calendar] on the radio and online recently,” said Jason Wilder. “It seems like you always hear it’s the National Day of something. I found some entertainment value in it myself.  It can affect anybody. Different things strike different people in different ways. Sometimes something comes up and people might say, ‘Oh that’s so cool!’ and I think there are a lot of people that would get a kick out of National Disc Golf Day. It’s just another way to reach people that may or may not have never heard of the game. Either way, this is something that might motivate them to actually go out and give it a try.”

Picking the date was one of the most difficult parts of the process. In doing so, Wilder called on the wisdom of one of the earliest names in disc golf, “Lightnin’ Lyle” Jensen #102, one of the original 100 disc golfers around the country to receive a letter from “Steady” Ed Headrick #001 himself, the Father of Disc Golf, in which Ed explained his new idea for the Professional Disc Golf Association and why Lyle should join.

One of the 100 original letters sent to potential PDGA members around the country. Originally sent to Lyle Jensen #102, who also provided the images. Click on the thumbnail to read about the 40-year history of the PDGA.

After talking with Jensen and reading through “A Chain of Events”, a look back at the history of disc golf written by Disc Golf Hall of Fame member Jim Palmeri #23, Wilder and Jensen came up with the date of the first Saturday in August, which was when the first Rochester Flying Disc Open took place in Rochester, New York, decades ago. This isn't something that just randomly came about. "It's like a lot of things in this sport, where multiple people might be working towards the same thing at the same time without ever knowing it," said Sara Nicholson. "I was working on this idea back in March...talking with Dan "Stork" Roddick #003...trying to find a date relevant to disc golf that would work." There were more hoops to jump through than one might think to get this accomplished. "The [National Day Calendar] has an [application] to fill out and each question requires a lot of detailed information," Sara explained. "There has to be an official organization involved and significant historical dates with real meaning to even get through the first step of the process."

Sara worked with "Stork" and several other legendary disc golfers like Jim Palmeri #023, Cliff Towne #5450, Eric Vandenberg #3089, Tom Monroe #33, and Joe Feidt #362. While Sara was busy working on the 2016 Women's Global Event, Jason Wilder presented the same idea of a National Disc Golf Day to PDGA Events Manager Michael Downes #13898 at the 2016 Glass Blown Open and his information was forwarded on to Sara. Little did Mike or Jason know that Sara was already deeply involved in this project so the two of them joined forces to create what would eventually become National Disc Golf Day!

The date of the first Saturday in August was approved and as a bonus, Sara discovered that the date just so happened to coincide with when “Steady” Ed’s patent for the Disc Golf Pole Hole was issued in August of 1975 (U.S. Patent #4039189).

So, what can you do on National Disc Golf Day to help spread the word? If you're already a disc golfer, think outside the box. Instead of simply going to play disc golf, go out and do something different to help grow the sport. Go out and teach someone to play. Sign someone up for their first tournament. Donate some used discs to someone at your local course that could use some new equipment. Get involved with a different community group (church groups, Boys Scouts of America, Girl Scouts of America, local schools, etc.) and see if they are interested in learning about the sport.

Whatever you decide to do, even if it just going out and playing a round with your friends, make sure to take pictures and videos. Put them up on social media and use the hashtag #NationalDiscGolfDay to help spread the word!