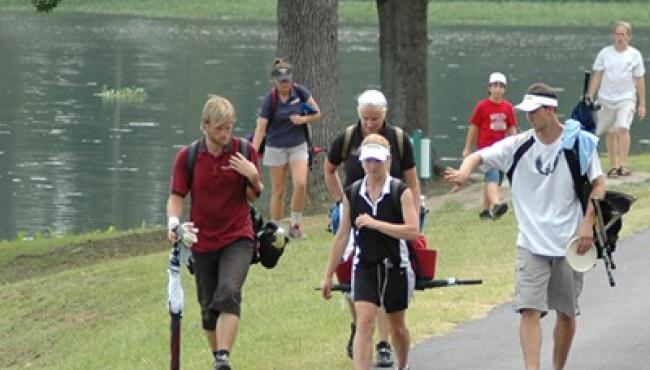 As a nation, we simply do not walk very much.  We tend to watch TV, drive our cars and sit at our computers.  When we choose to walk rather than sit, we burn more calories and our hearts have to work a bit harder.  If we keep walking, our bodies adapt to this kind of good stress and we become physically fitter. Ideally, a person should walk around 10,000 steps a day to maintain a healthy level of fitness.

With support from the PDGA, the first nation-wide research study to examine disc golf and physical activity is complete.  We talked with people playing sanctioned tournaments, weekly doubles events and casual rounds.  Our main goal was to discover just how much folks walk while playing a round of disc golf.  We clipped pedometers on 257 men and 156 women playing 8,029 holes of disc golf on 38 different courses.  We found out that every time a person ventures outside to play disc golf, they take an average of 6064 steps; well on their way to reaching 10,000 steps.  We were also interested if gender, age or score influenced the average number of steps folks walked while playing.  Along the way, we travelled to eight different states, asked a lot of questions and learned a lot about the great sport of disc golf.

We ran some fancy-schmancy statistical analyses on the data we collected and discovered that women walked about 60 fewer steps per hole than men on the same course, from the same tees (regardless of their age or score).  On an 18-hole course, that amounts to a whopping 1,080 less steps.  Because men typically take longer strides, we anticipated the exact opposite.  Equally as interesting, for every year older (regardless of their gender or score) people walked about ten less steps per 18-hole round.  So, if you are 50 years old, then you will likely walk about 300 less steps than a 20-year old on the same 18-hole course.  Why?  Perhaps both women and older players spend more time in the fairway and less time wandering around.  For me, adages like “older and wiser” and “the women are smarter” come to mind.  Score also proved to be a variable that had an influence on steps.

Each additional throw a person took resulted in just under four additional steps per hole, regardless of their age or gender.  Missed your twenty foot birdie putt?  At least you are getting more exercise.  As is the case in nearly every sport, the more skilled you are the less the physical workload.  If you want a serious workout, play the Harold Duval designed Ashe County Park course located deep in the mountains of North Carolina.  Folks playing the long tees averaged nearly 9000 steps per 18-hole round.  That fact, combined with the severe elevation changes, likely make it one of the most physically demanding courses in the country.  In addition to collecting step counts, we ask folks a lot of questions and some of the answers surprised us.

A lot of people we talked with preferred to play casual rounds and local doubles events rather than sanctioned tournaments.  Most folks could not name more than one touring professional and many were not members of the PDGA.  When we asked people their PDGA number, we got a similar response; “I might play in one or two tournaments a year…for me, it is just not worth joining.”  Of course, for many of us, being part of an organization means more than the bottom line.  Family obligations keep me from playing more than a handful of sanctioned tournaments a year, however, I do like to check out my tournament statistics (as bad as they are).  I really enjoy reading DiscGolfer magazine each month and being an active member somehow makes me feel like I am part of something bigger.

Perhaps just as important is what we did not investigate.  We did not take elevation change into account (walking up hill is undoubtedly more strenuous than walking on a flat surface), or examine how much time people spent in their target heart rate zone while playing.  Pedometers are relatively inexpensive and wearing one is pretty unobtrusive.  Altimeters and heart rate monitors cost plenty and may limit the size of the subject pool.  Future studies should consider investigating these factors.

This study’s findings suggested that playing disc golf is a great way to be physically active and that age, gender and score may have a significant impact on the amount of physical activity people get while playing.  Of course, disc golf is about more than simply walking.  For many of us, playing disc golf is an ideal combination of fun and competitive spirit.  Mark Twain supposedly once called ball golf “a good walk spoiled.”  As someone who enjoys the excitement and challenge of disc golf, I like to think of it as “a good walk defined.”

I must extend a very special thank you to Brian Graham, Jon Lyksett, Chris Tuten, Des Reading, Jay Reading, David Barney, Chris Page, David Shope, Chris Cooper and all of the folks that agreed to participate in the study.

Dr.  Justin Menickelli (#31347) is an Associate Professor of Health, Physical Education and Recreation at Western Carolina University located in the Smoky Mountains of North Carolina. When not playing disc golf, he enjoys spending time with his wife Kristin and their two boys Aidan (age 4) and Noah (age 2).