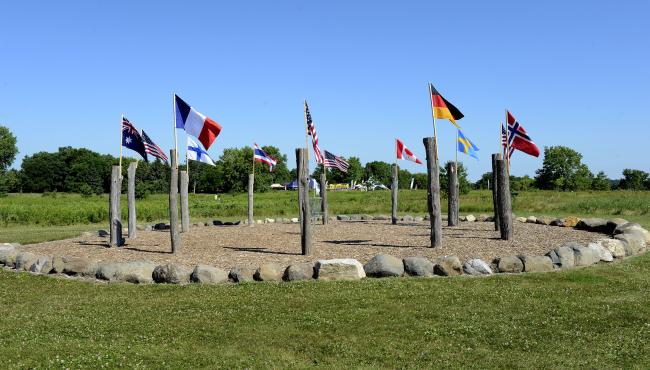 Hosting a PDGA Major is no easy task. Interest was shown from several involved local organizing committees (LOC), meaning that the selection of these events was difficult as so many excellent bid packages were submitted. After much deliberation from the PDGA Staff and the PDGA Board of Directors, the Professional Disc Golf Association is pleased to announce the following 2018 PDGA Major Events. Drumroll, please!

The USWDGC will be held in Lansing, MI. Another fantastic bid has come in from Erin Oakley #17643 (PDGA Women’s Committee and overall promoter of Women’s Disc Golf) and Tom Kinder of the Greater Lansing Sports Authority (GLSA). In the words of Lansing Mayor Virg Bernaro, “Lansing is a city of diverse attractions, offering a wealth of cultural, historical and recreational options. You’ll also find a lively atmosphere with opportunities for rest and relaxation or action and adventure, all enhanced with countless restaurants and shopping options in a friendly, safe and affordable environment. Better yet, Lansing is truly a city on the move as is evident by miles of urban trails, acres of parks and green space, and numerous recreational venues.”

Lansing is the annual host to Disc Girls Gone Wild (DGGW), one of the largest women-only disc golf tournaments in the world. The proposed TD is the same as DGGW, Keith Aten #6147, with vast support not only from the local club (Capital City Crushers), but also the GLSA.  The proposed courses are both located in Burchfield Park (Devils Den and Rivers Edge), and are very highly rated by recreational players, as well as those with the competitive fire. The proposed Host team has already begun developing an extensive event schedule, chock full of fun and engaging side events for all competitors of the 2018 USWDGC.

This is the second submission from the folks in Lansing. In a bid to host in 2017, they were advised to tweak just a few small things to improve their chances of being awarded the event, and they more than adequately addressed those sticking points. This displays their commitment to host a PDGA Major event, and their desire to make it a memorable experience for all involved. We are thrilled to visit Lansing in September 2018.

The 2018 PDGA Tim Selinske US Masters Championships will be held in Crown Point, IN and will be directed by Jay and Deb Svitko at the Lemon Lake Flight Center, with vast support from the local disc golf clubs and CVB. Lemon Lake is well-known as the host of two recent Worlds events; the 2010 and the 2013 Professional World Championships, and is also recognized as a PDGA Regional Development Center. The Lake County Parks system will be having its 50th anniversary in 2018, making it the first and oldest of the 13 parks in Lake County, Indiana.

Having been the recent recipients of a $12M park improvement bond, there is much work already underway for all the Lake County Parks. Lemon Lake County Park improvements will include new roads, additional parking, park pavilions and a new children's playground all scheduled for installation in 2017. We couldn’t imagine a better way to celebrate than to hold this prestigious memorial event at Lemon Lake. If you have been to Lemon Lake, you know that the park is rich in disc golf and has some of the most well-maintained and scenic courses in the area. The competition will take place in May, 2018. We have no doubt that Tim Selinske himself will be smiling down on the players as another Major PDGA competition is hosted in his honor.

The Amateur Disc Golf World Championships will be held in Charlotte, North Carolina and will be Directed by North Carolina State Coordinator Robert Leonard #21676 with the support of the Charlotte Disc Golf Club (CDGC) and Charlotte CVB. The CDGC has taken on many new faces since their last running of a PDGA Major (US Masters 2015 and Combined Worlds 2012), as the bulk of the responsibilities have been passed over to some younger, excited personalities. With the addition of new Club officers come big ideas, and the idea to host yet another PDGA Major in Charlotte has been brewing for quite a while. The Championship will make use of many of the area’s premier disc golf courses, and will offer an opportunity to not only show off the rich disc golf history of the Charlotte area, but also to put on display the Queen City itself, which is one of the fastest-growing cities in the country. Those who attend the event will quickly discover why that is the case. The 2018 Amateur World Championship will be held in mid-July.

It was decided by the PDGA Board of Directors at the 2016 Fall Summit that the Junior divisions have been experiencing enough popularity and interest to warrant their own, stand-alone World Championship competition. In a proposal submitted to the Board earlier in 2016, Doug Bjerkaas#14902 and Jeremy Rusco  #29631 of Dynamic Discs in Emporia, KS. offered to play host to the Junior World Championships for a period of three years, at which time the event would undergo further evaluation and consideration to be bid out to other venues in the years following. This proposal was approved unanimously by the BoD. Therefore, the inaugural PDGA Junior Disc Golf World Championships will be held in early July, 2018 in Emporia, KS. and will be hosted by the superb event team at Dynamic Discs.

The Professional Disc Golf World Championships will be contested at the Smugglers' Notch Resort in beautiful Vermont and will be hosted by famed TD Jeff Spring #43994, with support from the resort staff, the Green Mountain Disc Golf Club, the Vermont Tourism Department, and a bevy of local businesses. This full-service resort offers a “one stop shop” atmosphere, providing accommodations, ancillary event venues and options, four full restaurants, a grocery store, festivals, day care and most importantly, two VERY impressive disc golf courses: Brewster Ridge and Fox Run. The courses are the perfect complement to each other; Brewster is a clean and fair wooded course, and Fox Run is a long, more wide-open course with breathtaking mountain views and treacherous OB. Basically, once you get to the property, you will not have to (or want to) leave.

If you have ever attended the Green Mountain Championship, then you are no stranger to the myriad social opportunities associated with an event at “Smuggs.” This event promises to be packed with great disc golf as well as some enticing ancillary events. Activities could include live music, games and a fundraiser poker tournament, a climbing wall, glow golf, food and beverages for sale, and a beer release party (often celebrating collaborations between the likes of Nate Doss and Fiddlehead Brewing). The competition will take place in September 2018 and will be an event you won’t want to miss!

The second iteration of the PDGA Pro Masters World Championships will be contested in Kansas City and will be hosted by proposed TD and current Kansas State Coordinator Scott Reek #12824 and the Kansas City Flying Disc Club. In addition to the Local Organizing Committee (LOC), the Kansas City Convention and Visitors Bureau (Visit KC), Kansas City Disc Golf Divas, and Women's Intersport Network for KC (WIN for KC) will all play a hands-on role in ensuring the championship is a success. The LOC will operate under the direction of Reek, and with consultation from a bevy of experienced organizers, there is no doubt they have vast experience in hosting elite level PDGA events, such as the famed KC Wide Open.

Swope Park will likely be the featured course, while other courses to be used in the event include familiars such as Rosedale Park, Shawnee Mission Park, Stocksdale Park and Waterworks Park. Home of the 2009 PDGA Combined World Championships, Kansas City is an area flooded with disc golf, and the LOC has selected the best of what the City of Fountains has to offer for the 2018 PDGA Pro Masters World Championships. The event will take place in mid-August.

We look forward to another exciting year in 2018!

Excited and honored to once again be part of the PDGA Majors Tour!

With all due respect, was there something published to the membership/public that I missed about the Junior Division being considered for a stand alone PDGA World Championship before this announcement?

It was proposed to, and approved by, the BoD at the 2016 PDGA Fall Summit. Read the meeting minutes for more details.

I am curious where the mention of Swope Park likely being the featured course for the Pro Masters Championships came from?

It came from the bid that was submitted to the PDGA. Obviously, it was proposed well before the current situation with Swope had developed. The PDGA Site Review with the Local Organizing Committee members is happening next week, at which time the exact courses and facilities will be identified, reviewed and confirmed. We were terribly sorry to hear about Swope, and wish the community the best in their efforts to save the course.