After 3 days of beautiful sunny weather, the USDGC Championship Saturday brought us a new kind of situation, with light to moderate rain almost throughout the day. As anyone who’s been to Winthrop Gold during the USDGC knows, the grass on the fairways and greens is cut short, which means that in wet conditions, your disc is probably not going settle as is it would on a dry and sunny day. 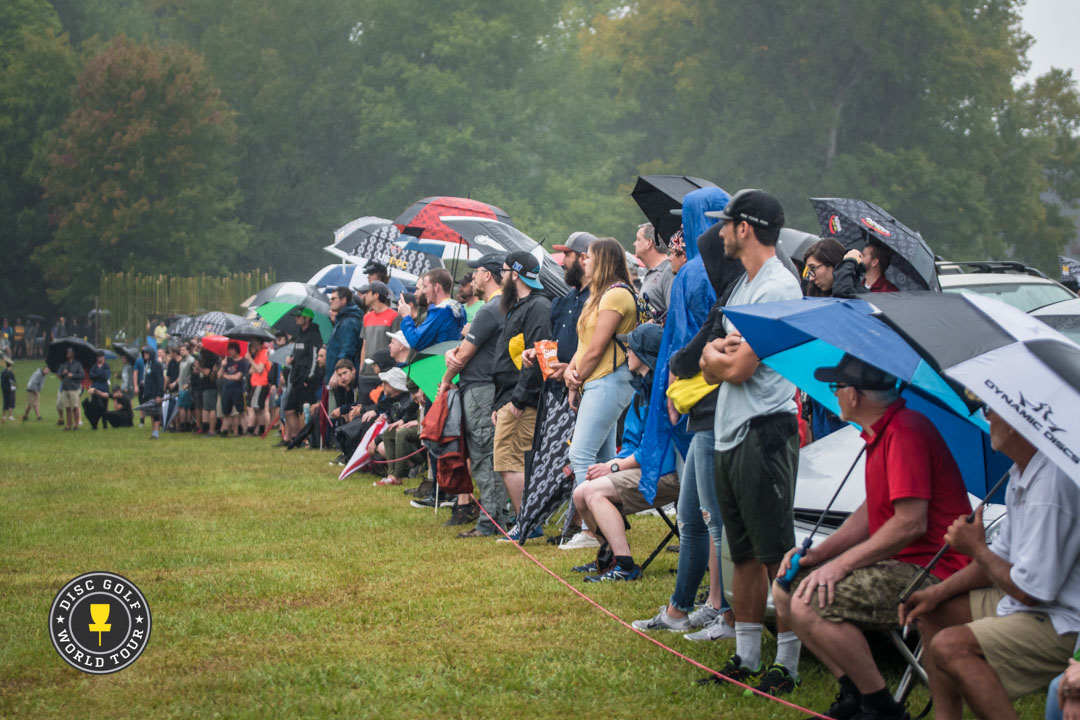 Despite the dark skies, a huge gallery emerged to Winthrop already early in the morning. There was no doubt what the hottest ticket in town was this Saturday. The setting was thrilling. Nate Sexton, who’s without a doubt one of the hottest players in the world, but had never won an event of this caliber, in the lead with a 3-stroke buffer over the 2-time and reigning World Champion Ricky Wysocki, who’s won his fair share of big events in the past couple of years, but hasn’t been able to capture the US Disc Golf Champion title. Behind these two, a fleet of hungry hopefuls like 2016 US Champion Jeremy Koling and 2015 Champion Paul McBeth just to name a few.

Wysocki had a lot of fight in him

Much to Wysocki’s disappointment, Sexton was able to stretch his lead early on – up to a total of 7 strokes at best, before they made the turn. Everyone knew Wysocki would not go down easy and he didn’t, gaining ground with birdies on holes 5 and 8, and an eagle on hole 10. However, Wysocki also had two early bogeys on holes 1 and 3 and one more later on hole 12, where he hung his sidearm 2nd shot all the way to the road OB on the left side of the fairway. Sexton’s only bogey came on the final hole when he laid up by the basket to seal the victory. After hole 11 Wysocki had lessened the gap to 4 and did so again after hole 14, but that’s as close as he could get. Wysocki’s -6 was still enough to bring him the 2nd place and a $6,000 pay day.

Video: Ricky Wysocki moved to 4 back from Sexton with this birdie on hole 11. 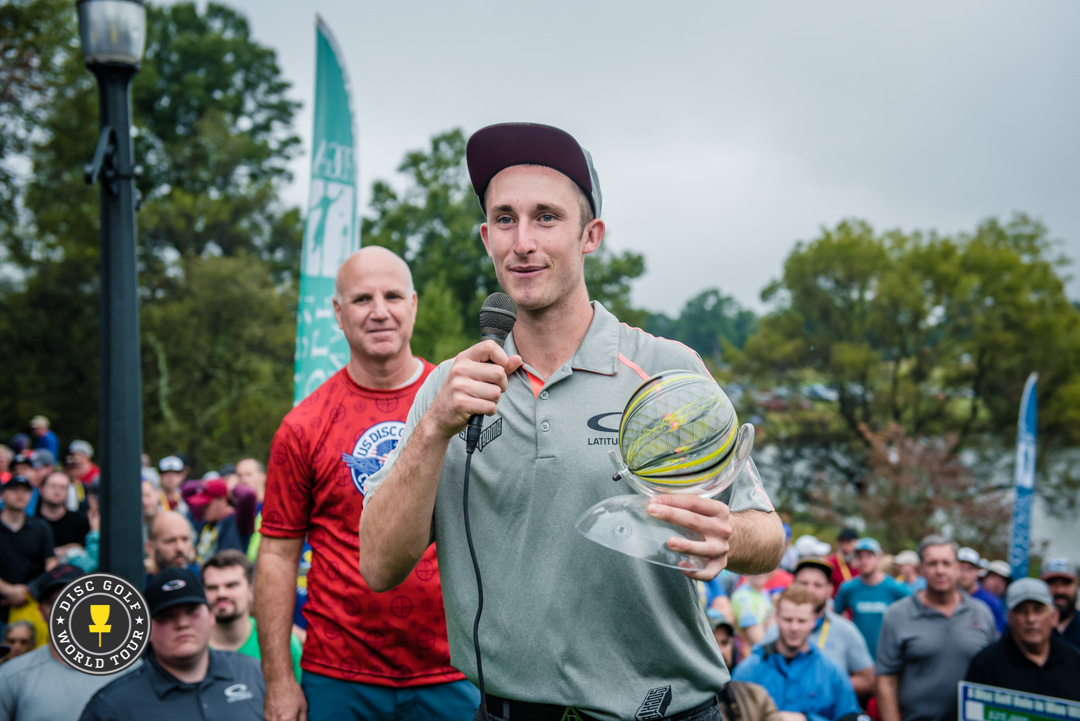 Ricky Wysocki with the DGWT trophy.

While Wysocki did not win his first US Title, he did win the DGWT Tour Champion title for the second year in a row. It was a close race though, between him and Paul McBeth. Very close. They actually were tied at 2550 points after the USDGC. In the case of a tie, the DGWT rules say the points winner is to be determined by the most DGWT event wins, which meant Ricky would bring home the title, thanks to his wins at Aussie and Konopiste Open.

During Sexton’s USDGC Trophy acceptance speech he said he was somewhat surprised to be standing where he was. “I wanted to believe I was capable of winning a tournament like this, and I guess I am,” said Sexton on the stage near hole 18.

In 2015, Sexton had the lead going into the final round, but finished 4th. When asked what the difference was between the final round in 2015 and this year he said, “The weather. It wasn’t so windy (this year) and I just have a lot more experience”.

Sexton said hole 13 was pivotal for him. After placing his backhand drive too far to the fairway’s left side, he rolled the dice with his second shot, a forehand that ripped through the fairway and landed safe and set him up for a birdie, which he later said was,“probably the riskiest shot I took the whole round.” After that he knew that if he just executed the rest of the holes according to his plan, he would be very hard to catch. Still, even after reaching that point he said he definitely wasn’t about to dismiss hole 17. “It’s never over until you get past 17,” said Sexton.

Another solid Major finish for Barsby 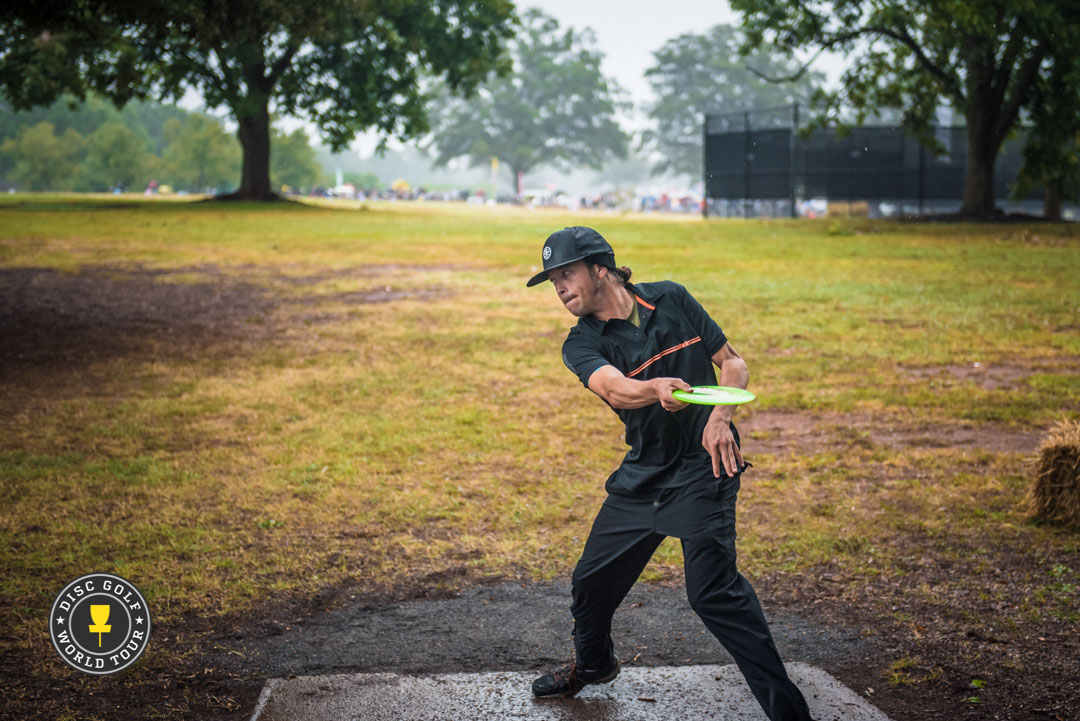 It’s been a big year for Gregg Barsby and majors with his down-to-the-wire finish with Paul McBeth at European Open (finishing second) and now his tied for 4th place finish at the USDGC. Earlier in the event he had fans wondering if he’d give it a run, but it just wasn’t in the cards.

“I’m obviously disappointed with the amount of mistakes I made through the event and all of the OB’s. On the other hand my putting has been the strongest it’s been in a major this year,” said Barsby, who had some amazing putts, especially on the last 2 rounds. Today he sank a 50-footer on hole 14 for birdie and then ended his round with another monster putt.

Barsby collected 11 birdies, but also had four bogeys today. He shot a -6 and ended at -24. He said he knows his shot-making is there and so is his putting and he’ll regroup. “The course is setting up well for me. I’ll get it one year,” he said after finishing the round. 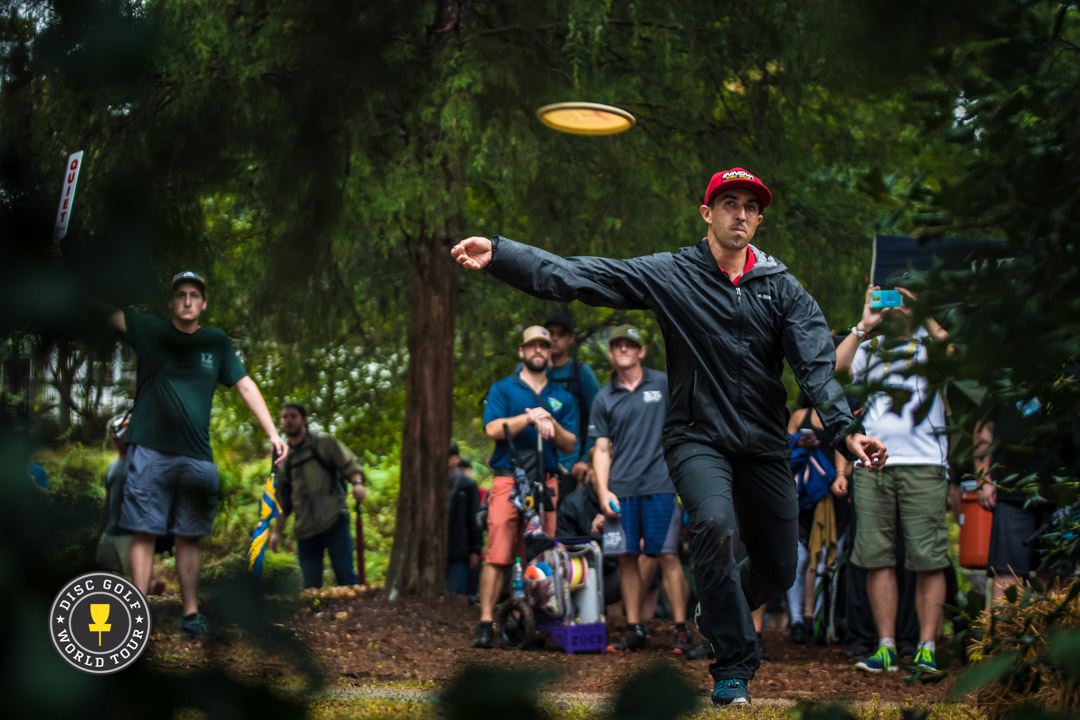 Going into the final round, the 2015 US Champion Paul McBeth had a lot of ground to cover, sitting at 16 under par going to the final round, 10 shots back from Sexton and 7 from Wysocki. McBeth, who’s known for his ability to charge on the final round, ended up shooting the hottest round of the tournament, a very respectable -11, including 7 birdies and 2 eagles. This bogey free round was enough to earn Paul the 3rd place this year. 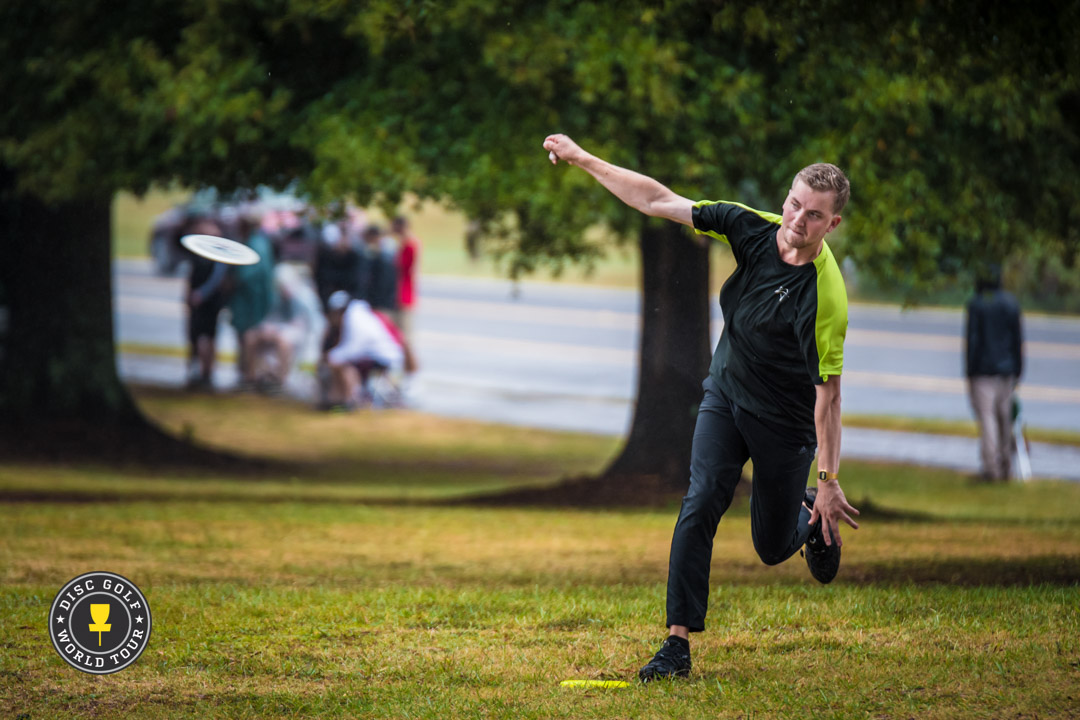 Seppo Paju had a great tournament.

Though his 6th place tied him with his best Major finish to date (Pro Worlds, European Open), Seppo Paju considered this his best one because of the top talent that plays in the USDGC and because the overall competition nowadays is so high. Paju was also the highest placing non-US player in the competition this year.

Philo Brathwaite had his best USDGC finish with his tie for 4th. His next best finish came in 2007 when he placed 19th. Although Philo had a slow start to his final round this year (+2 through the first five holes), he picked things up and ended up with a 62 (-4) for the day and (-24) for the event.

Recap on the Final Day action!

Video: Nate Sexton with a near ace on hole 16.

During the final round, our social media team was following the top 2 cards. As a result, you can find a lot of photo updates, as well as hole-specific play-by-play videos on our instagram account. Make sure to check them out here!

We also have The SpinTV production crew piecing together play-by-play tournament coverage videos from today’s lead card’s round, to be released sometime in the coming days. If you haven’t already, make sure to check out the lead card play-by-play coverage from the first 3 days of the Championship below:

We also highly recommend checking out the leaderboard and Metrix and course stats from today’s round. The new feature we added last year, player- and hole-specific Instagram videos on the scoring interface, is in place here at the USDGC too, so make sure to check those out by clicking the tiny camera icons where available.

Find the PDGA results page with preliminary round ratings here!