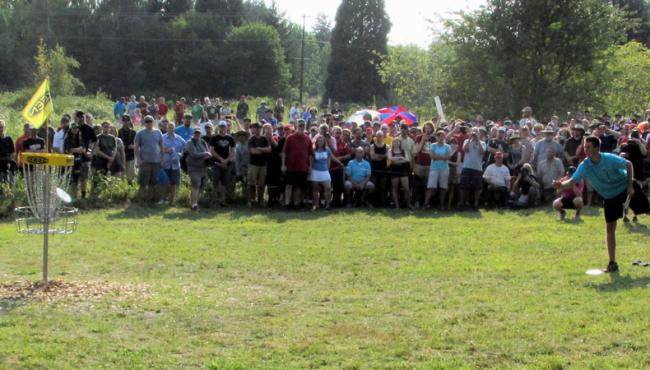 Hosting a PDGA Major is no easy task. Interest was shown from several involved disc golf communities, meaning selection of these events was difficult as so many excellent bid packages were sumbmitted. After much deliberation from the PDGA staff and the PDGA Board of Directors, the Professional Disc Golf Association is pleased to announce the following 2016 PDGA Major Events!

Drumroll please! The 2016 PDGA Professional Disc Golf World Championships will be held in Emporia, KS, directed by Jeremy Rusco #29631. Jeremy and his company, Dynamic Discs, have garnered an international reputation for hosting top-notch disc golf events around the United States, including the Glass Blown Open, which drew nearly 900 players to Emporia just over a week ago. The 2016 Pro Worlds will be held in early August of next year.

The Am and Junior World Championships will be held in Madison, WI and will be Directed by Mike Batka #20983 with the support of the Mad City Disc Golf Club and hosted by the Madison Area Sports Commission. Mike has a history of putting on great events, just as Madison has a reputation for being one of the premier recreation outlets across the country. Hometown to notable courses such as Token Creek and Elver Park, it's clear that Madison is of a top-level disc golf pedigree. The 2016 Am Worlds will be held in mid-July of next year.

The USWDGC will be held in Sabattus, ME and will be hosted by Peter Ruby at the Sabattus Disc Golf Complex. Tournament Director will be PDGA Maine State Coordinator Jason Rubito #49350. This is a region of the country that we have never seen a PDGA Major, and we are looking forward to the opportunity for the Northeast to show off its splendid autumn colors, as the event will be held in September. Sabattus, ME is one of the rising stars of the many disc golf complexes across the country, and we couldn’t be more excited to visit the city next year.

The 2016 Tim Selinske US Masters Championships will be held in Stockton, CA and will be Directed by Craig “Krash” Gustafson #25452 and the Delta Windjammers. They are well known for hosting amazing events on solid courses, and we are excited to see what the team has in store for 2016. A new track will be revealed at the Lockeford Springs Golf Course, which promises to add a new flavor to this long-standing event. We have no doubt that Tim Selinske himself will be smiling down on the players as the competition returns to his home state of California.

We look forward to another exciting year in 2016!

A trifecta for Emporia , KS indeed.

First, AM Worlds, then a NT for GBO and now Pro Worlds.

Well earned and deserved, DD and City of Emporia, KS.

It will be the MVP Wave.

Great I love the Wave, will wait till January to join.
Thanks for the quick response.

After October 1, any new or returning member can sign up to be current through 2016! Click here to join the PDGA now!

Thanks I would sign up tomorrow if I new I was going to get the Wave, I understand you might have some Inertias still going out, a fine disc I have a couple but as you know when you find a disc you love you want it in many weights and plastics and to have an PDGA Wave well that is icing on the cake.