Eveliina Salonen found herself in her first tight spot of the day mere seconds after taking the tee as the final round leader of the first PDGA Major outside North America in three years. 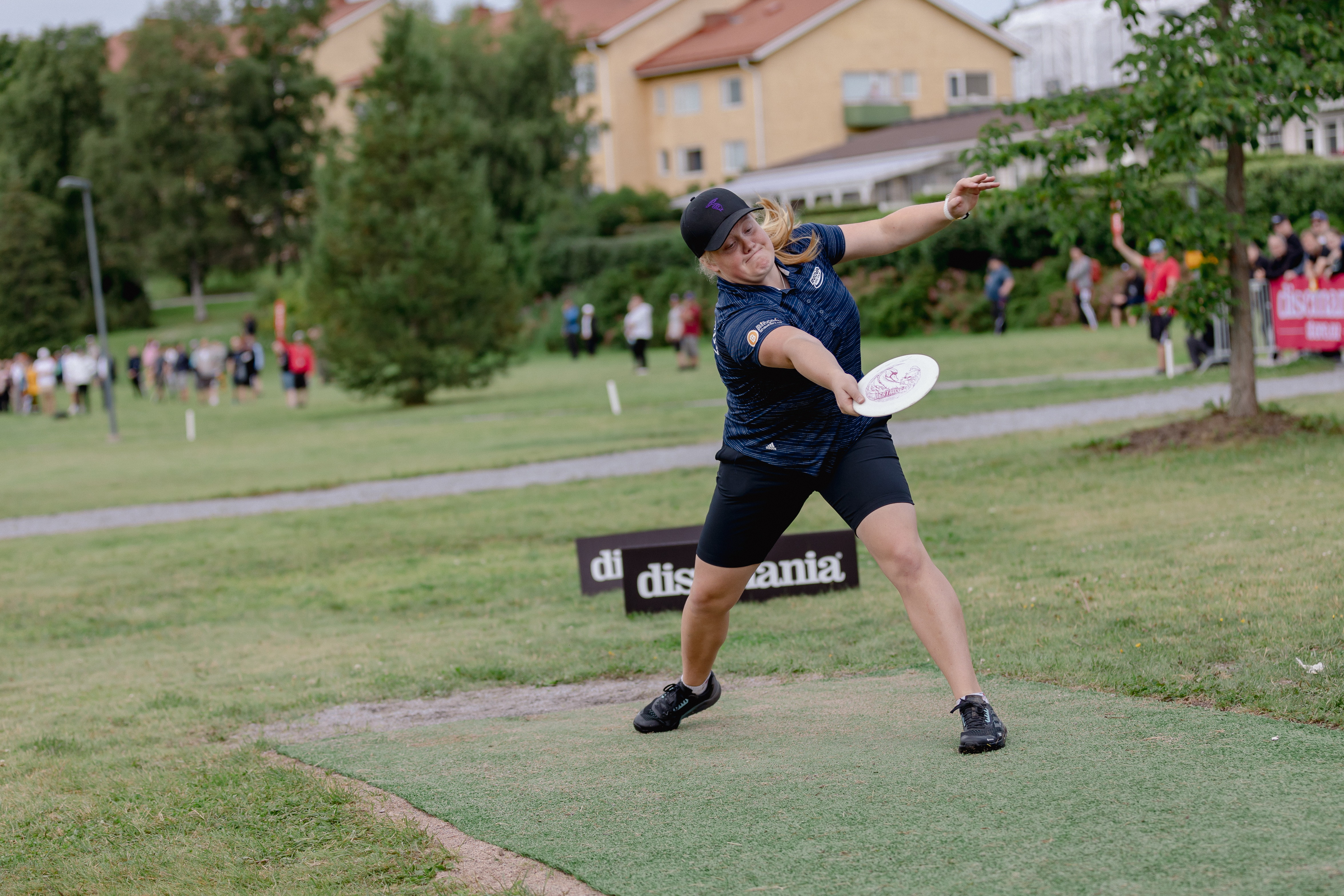 She then proceeded to effortlessly scramble her merry way to tap in territory with an uphill forehand roller through a rather nasty patch of cabbage and drooping branches of trees. Crisis averted; one would think but, following a putt that came up short, her disc dropped to the ground on the am side with a thud. With that, the crowd fell silent, and the air was sucked out of the arena.

Piranha Paige Pierce smelled blood in the water and made her move. 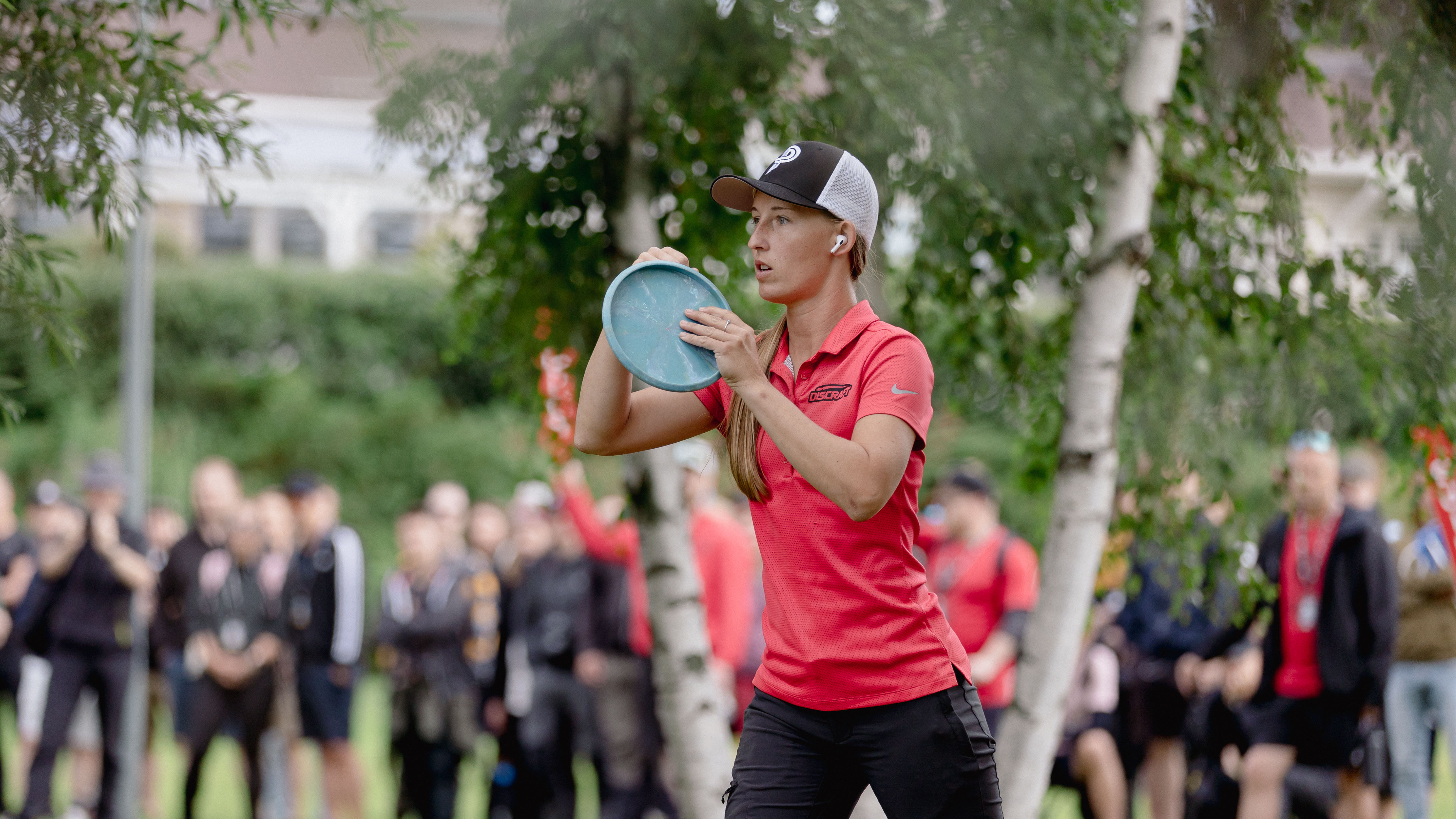 Correcting the mistake that drew the lead to double digits on the previous day, Paige turned her disc perfectly over to the green of hole 2 and smashed a deuce into the chains to reduce the lead to nothing.

Hole 3 saw a mishap that swung the lead back Salonen´s way, and hole 4 piled on another stroke to reset the standings to their original state. But holes 5 and 6 voiced their dissent and voted in another change at the top.

Meanwhile, a few strokes down the board, the natural order of things were finally being restored as the lead card interloper Kat Mertsch stumbled slightly on the starting blocks, allowing Henna Blomroos and Catrina Allen to secure the finishes that their rankings and ratings dictate. 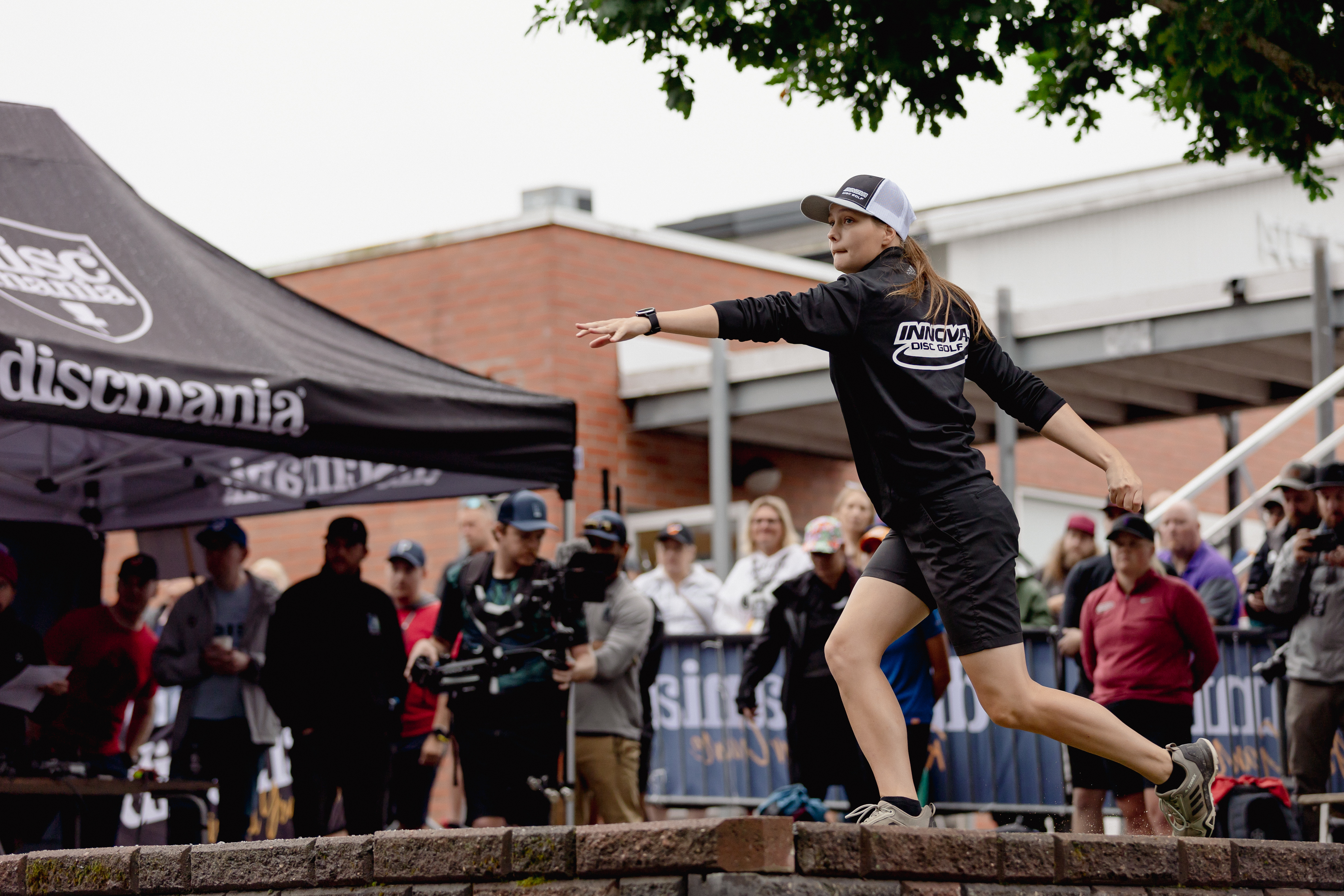 Back in the title fight atop the lead card, the bobbing and weaving with the jabbing and the feinting came to a crescendo when Eveliina parked the island green of hole 16 for the fourth round running. High noon was fast approaching at ‘The Beast’, tension was high and so were the stakes, and a fair few Finns in the mounting gallery of frisbee fanatics lining the ropes had clearly started to believe that their home soil hero could escape the advances of Pierce.

Playing from a position of power by the grace of a superior drive placement on the ever so treacherous 17th fairway, Eveliina had only to chip up to the pin in order to force Paige to make a critical decision on the potentially lethal green. A poor execution of a perhaps questionable shot selection saw Salonen juice her flick hard enough to stand up on its side and slowly flow over the rim of the containing boundaries.  A bogey saving putt up the hill from just inside the circle would have left Salonen with a fighting chance to make a heroic return on the most iconic finishing hole in disc golf, but an over ambitious air mail stopped Eveliina dead in her tracks.

Stepping up to the final tee with three strokes in her back pocket, Pierce made a valiant effort to keep things interesting by challenging the first of the dozen OB options available to her on hole 18.

Chipping her way to the pin for a bogey tap in, Pierce secured her record-breaking 17th PDGA Major win in rather anticlimactic fashion. 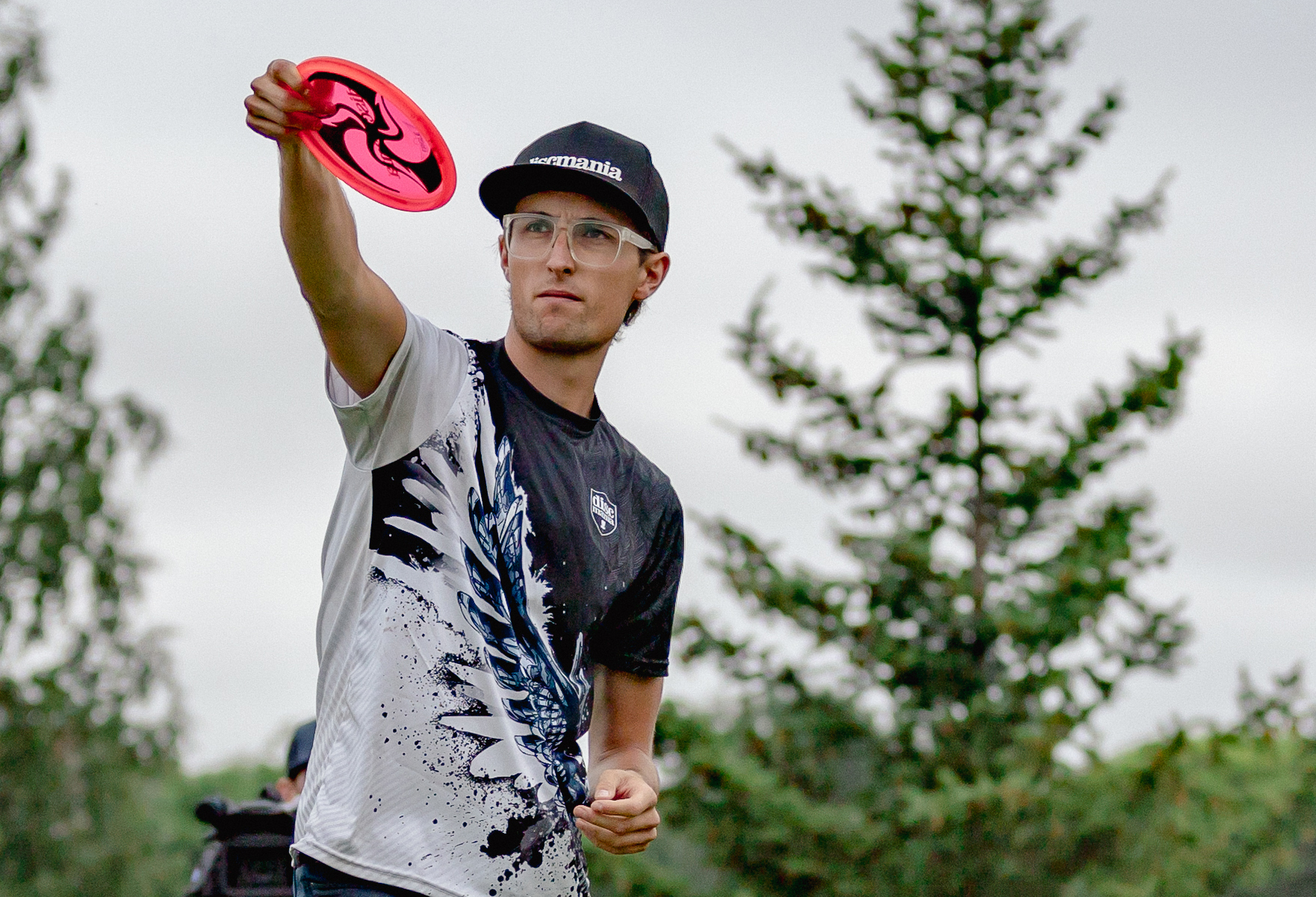 Battle Until the End

The absurdity surrounding the ongoing McBattle at the top showed no signs of abating as Paul McBeth and Eagle McMahon teed off for the final round with competitors Chandler Kramer and Kevin Jones in tow.

Matching birdies on hole one, the match pushed to tee two, where McBeth had McMahon at a disadvantage with his forehand intact versus McMahon’s reliance on his left hand. With a fifteen-foot birdie tap-in, McBeth took the European Open lead for the first time since 2019, and with a 45-foot eagle make on the par 5 hole 3, Paul set a beyond perfect pace to go up by two and rip the reins out of Eagle’s razor-sharp talons. 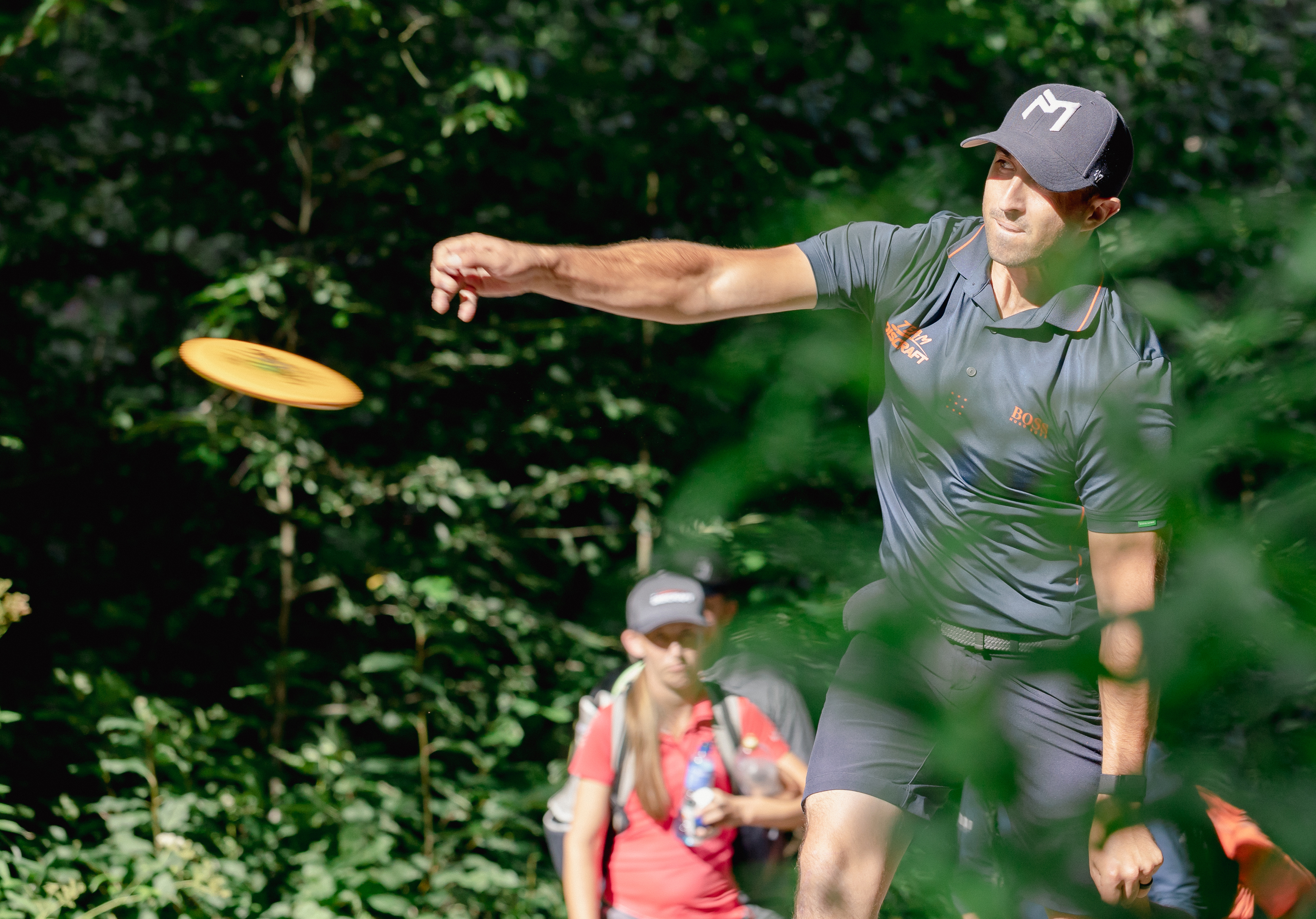 After pushing on hole four, Paul’s hot streak went momentarily cold, allowing Eagle to snatch one back. With McBeth running lukewarm through the midsection of the course, McMahon launched a hot streak on holes 8 through 14, remaining cool and collected as McBeth pulled a ginormous rabbit out of a miniature hat as he scrambled to a bullseye par on hole 13 after venturing deep into no man’s land with a shank off the tee.

Meanwhile, Ricky Wysocki and Calvin Heimburg were catching up on their work, finally setting the pace you would normally expect them to keep up from day one and throughout. This final day push saw them to 12th and 8th place finishes, respectively.

From the bottom of the lead and the top of the chase, KJ USA and Niklas Antilla carried on scoring like normal touring pros do on a good day, which was enough to fend off the Chandler Kramer express as he slowed his roll a bit and descended back down towards earth. The trio settled in 3rd, 4th, and 5th, with Kramer’s meteoric rise through the ranks being the most impressive performance turned in by the entire field, period.

Back in the battle for European air supremacy, both combatants had yet to take a double bogey in the event. That is something that Stat Mando will undoubtedly reveal to be a key ingredient in the stunning degree of scoring separation that men with Scottish sounding surnames had managed to create between themselves and those sporting umlauts and double vowels in theirs.

The miracle on hole 13, impressive as it was, nevertheless lead to a parting of the ways for the two McBattants. The stroke ceded to Eagle would end up trading hands twice more, first when Eagle missed the island on hole 16, and again when Paul went OB on 17. But once those bright white lines painted on the ground of Nokia handed McMahon back the prize he so fiercely had fought for, not even a tap in birdie from McBeth on the green of 18 could wrest it back from his possession.

Thus ended the decade-old reign of McBeth over the fairways of Finland and a new king rose to the throne. 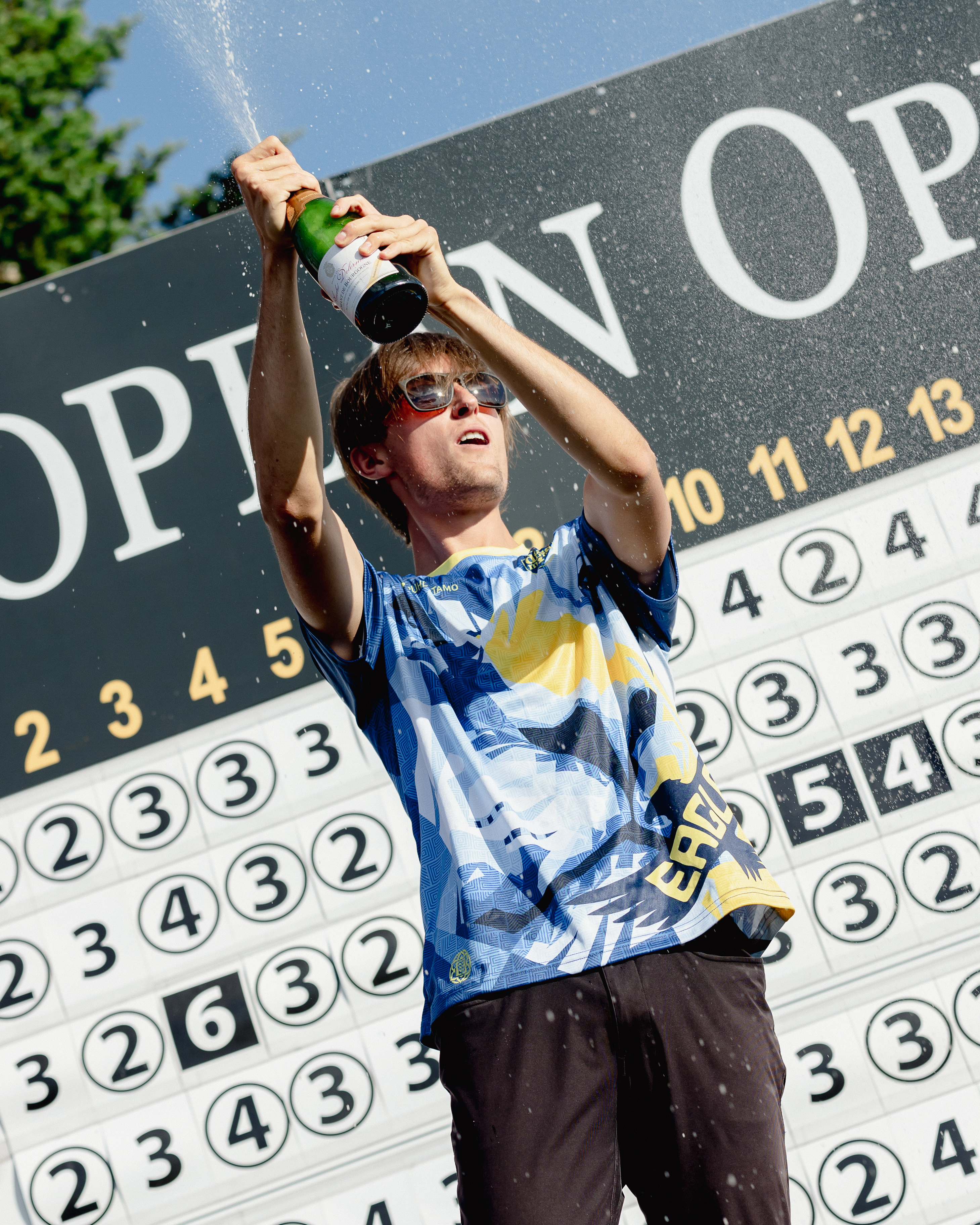 To celebrate, McMahon will vacation in Estonia and Iceland and continue to rest his injury until he strikes again at Worlds. Meanwhile, McBeth will be doing hours upon hours of dedicated practice with his Finnish caddy before flying him out to Emporia to be his standard bearer as he tries to settle the score.

Ultimately the score separation between McMahon and McBeth was a solitary stroke, while the gap from McBeth down to third place was an astonishing 16 stokes.

Do not expect to see something similar during the rematch in Emporia.

That is excellent, and I mean EXCELLENT reporting. Thank you. I watched the final round on DGN, and you wrote it like I saw it.