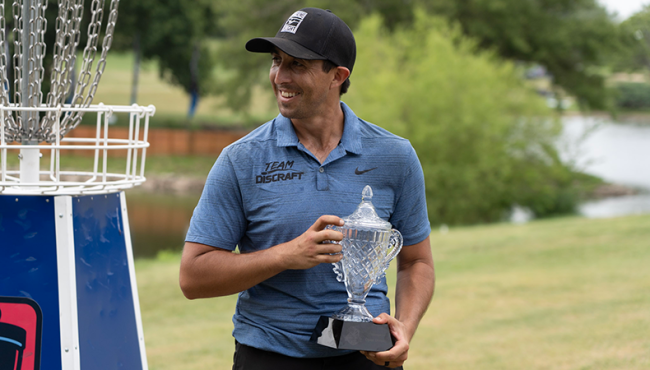 In Emporia, it’s never over until it’s over.

Paul McBeth looked unbeatable in the early goings Sunday afternoon at the Country Club. After he sank a 50-foot putt in swirling winds to take the lone birdie on hole 2 during the final round of the Dynamic Discs Open, he was up six shots on his nearest competitor and in complete control.

Disc golf’s top-rated player flailed through the 1014-foot 8th, succumbing to some hecklers and twice coloring outside the lines en route to a triple-bogey 8. He followed that up with two more bogeys, leaving the door open for Emerson Keith, who scraped back seven shots off McBeth’s lead in a mere four holes to get within one stroke of the reigning PDGA World Champion.

All the while, Calvin Heimburg did more than just lurk on the chase card. The 2019 PDGA National Tour Points Champion was surging, navigating the Kansas gusts as if they didn’t exist on his way to leapfrogging Keith carding birdies on five of the last six holes to put the pressure on McBeth.

But like he always, somehow, manages to do, McBeth displayed the poise and prowess that have defined his career. He made deft adjustments, keeping his drives low and away from the clutches of the wind on holes 12 and 13. And even when he erred again, throwing his drive into an early tree on 14, he recovered with consecutive holes under par, including a meticulous park job on hole 16’s island to seal his first win on the 2020 Disc Golf Pro Tour.

It was a battle of attrition as Sunday’s final called back to the 2019 Dynamic Discs Glass Blown Open, where McBeth emerged with a one-shot win despite a 2-over par final round. This time, the margin of victory was the same, as McBeth willed a 1-under par 64 to bring his three-day DDO tally to a 24-under par 171. That was good enough to hold off Heimburg’s bogey-free 10-under par 55, a heroic 1083-rated effort that provided a jolt of drama and catapulted the Florida native into the runner-up slot with a 23-under par total. Keith matched McBeth’s round score and slipped to third place with a 19-under par 176 for the weekend, while Ricky Wysocki took home fourth place with a 15-under par showing. Minnesota pro Noah Meintsma jumped up two places Sunday to finish in fifth place at 13-down, and he, Heimburg, Keith, Drew Gibson, and Terry Rothlisberger all qualified for the United States Disc Golf Championship in the process.

Paige Pierce, meanwhile, kept her cruise to the DDO title relatively stress-free. After carding a penalty stroke for losing a disc on hole 1, the reigning PDGA World Champion leaned on the 12-shot cushion she entered play with and took him the win with a 14-under par 187 total. Missy Gannon shot the FPO division’s hot round, a 4-under par 63 that took her weekend tally to 4-under and helped her take home second place. She jumped Catrina Allen and Paige Shue, who tied for third place with 4-over par scores after the 54-hole affair. 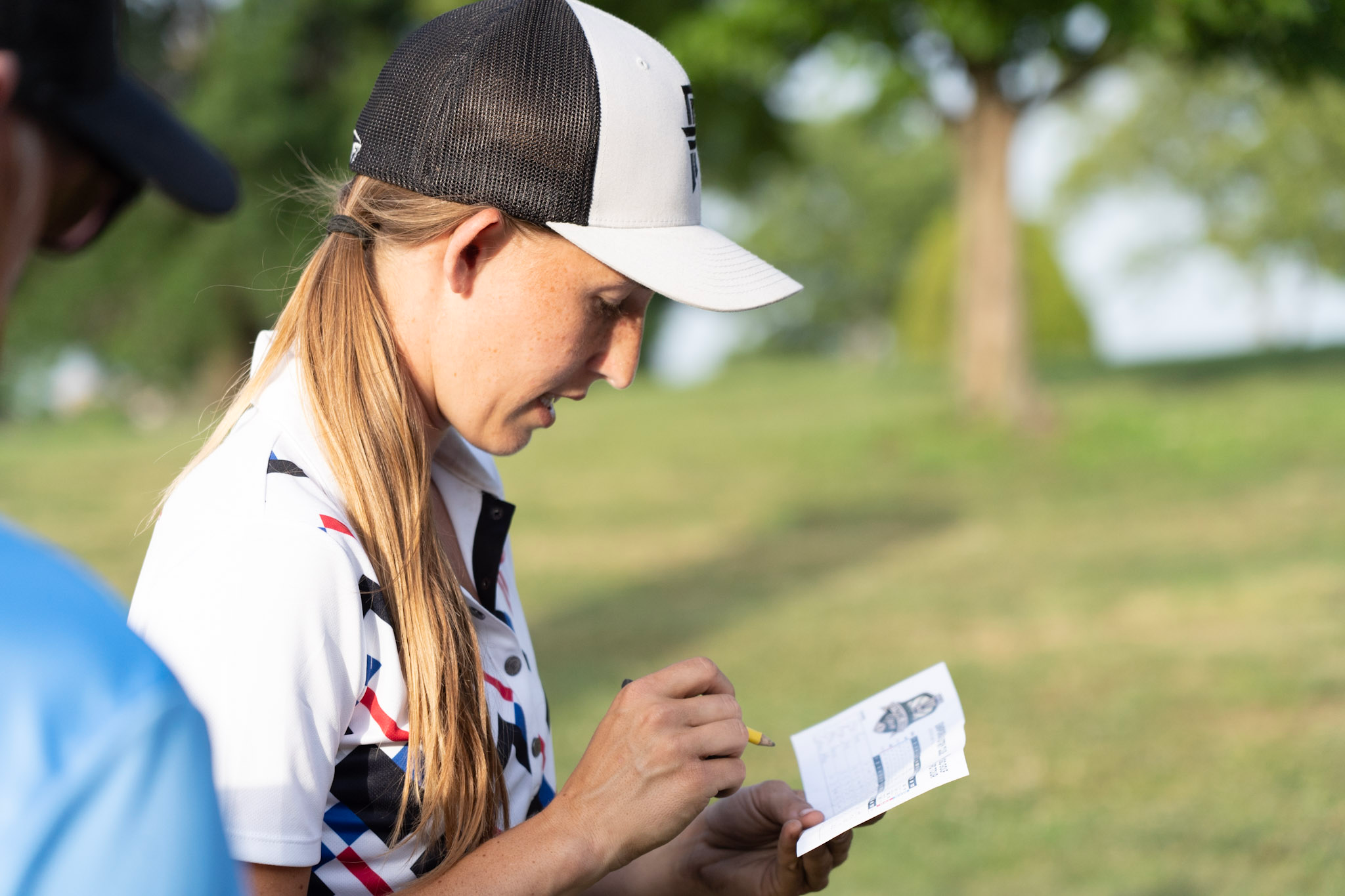 “I thought I threw the disc well there – it was windy all day and I thought I put it where I needed to. It just hit a foot away from being perfect and just stayed out of bounds,” McBeth said. “That kinda threw me off for a bit because I thought I was misreading the wind, and it took a couple holes to get back on track. Made a mistake on the next shot, and then honestly two after that. My decision making was very poor, but luckily on the last couple I was able to right that ship and bring this home.”

Indeed, his play on 16 was more precise than he had been all weekend. In the prior two rounds, McBeth was long of the pin and laid up his second shot to collect easy pars. Sunday, he was one of only five players to park the hole.

Heimburg, meanwhile, canned a 40-footer on the island green to start his round-closing turkey. He remained in second place in the Disc Golf Pro Tour standings after a weekend where he led the pack in circle 2 putting (44%). 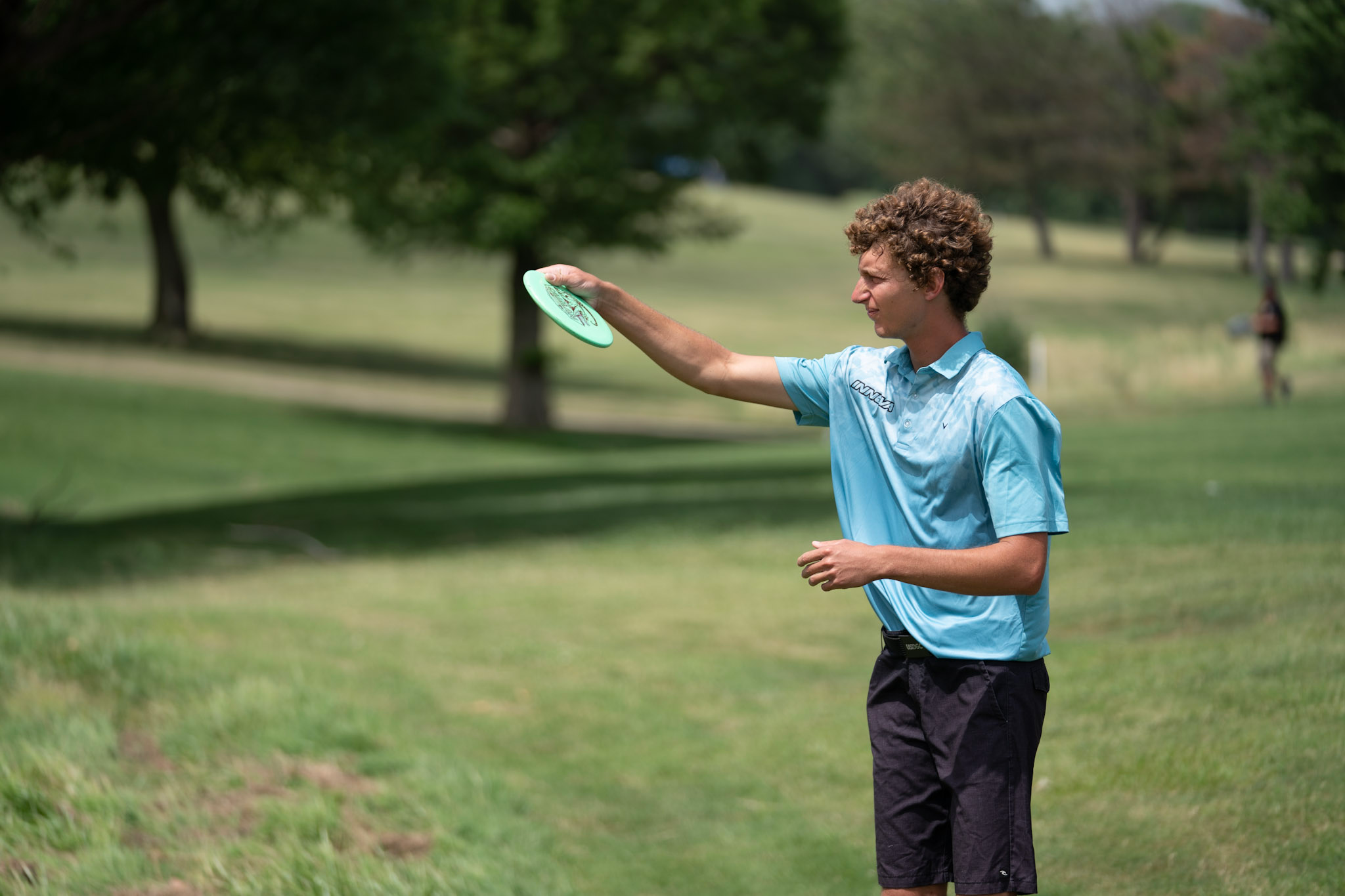 Calvin Heimburg nearly pulled off a stunner with a 10-under par final round. Photo: Bobby Brown | Dynamic Discs

For Pierce, the win was never in doubt. Her wire-to-wire victory, despite the blemish of a 15% bogey-or-worse rate, found her averaging 995.3 rated golf over three days.

She attributed the victory to increased comfort with her new Discraft plastic – she led up to the tournament focusing more on learning their drivers, which she relied upon heavily in the wind – and her affinity for competitive cash rounds with Nate Perkins and Dustin Keegan.

“Feels great,” Pierce said. “it’s been a long time, just missing competing so much, so it’s awesome to be back on a stage basically and come out with a win.”

She was also proud of her friend and teammate Gannon, who is also the reigning world putting champion. After an uncharacteristic showing during Friday’s opener in which she only connected on 67% of her circle 1x attempts, Gannon was perfect through the final two rounds and finished the tournament with an FPO-best 85% success rate on the green. She also finished in second place in parked shots (9%), birdie percentage (28%), scramble rate (30%), and circle 2 putts (11%). Her 1004-rated performance Sunday was the second-best of her career.

Ironically enough, both McBeth and Pierce said they considered waiting to restart their seasons until after the DDO. But the lure of a quality tournament in Emporia, combined with the promise of a post-produced CBS Sports Network broadcast, was too much to resist.

“It was such a good decision to come here and sweat it out,” Pierce said.

“This is when Worlds should’ve been, right around this time,” McBeth said. “It’s kind of unfortunate we don’t get to play that, but we have this tournament, which I honestly was gonna wait another month to see how the tournaments went. But...we have a great opportunity with CBS Sports, so I figured this is one I had to go to, couldn’t miss. Was luckily ready enough to bring this one home.”

The Disc Golf Pro Tour keeps rolling next weekend at The Preserve Championship in Clearwater, Minn.