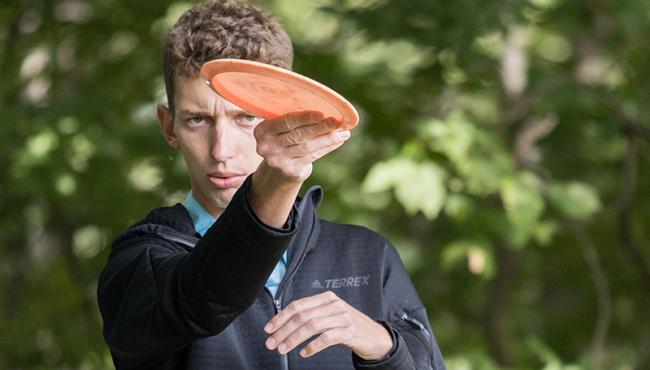 Calvin Heimburg, in his own words, was throwing good drives and made most of his putts on Saturday during the final round of the Disc Golf Pro Tour's 2020 Jonesboro Open.

That might've been a bit of an undersell.

Heimburg stormed out of the gate on Saturday, quickly erasing a three-stroke deficit to Paul McBeth, and battled from there to take a one-stroke win on the final regular-season stop of the 2020 DGPT. It bookends the Tour for Heimburg, who opened the year with a win at the Memorial, heading into the USDGC and the following DGPT Championships.

"I was throwing good drives, made most of my putts and got some fortunate breaks as well," Heimburg told the DGPT's Terry Miller. I got lucky there on five, where if you're going for it is either a two or a four. I was lucky enought to get the two, even though I missed the drive, to tie it up.

"After that, it was head-to-head."

Heimburg, who said Friday that a strong start on the front nine would give him the best chance to catch McBeth, grabbed one stroke on the second before Hole 5, the 495-foot, island-hole par 3. McBeth, in different wind conditions than players had seen all weekend, sawed his drive off out of bounds left. Heimburg went left as well but punched through to the green and capitized with the birdie putt.

Things, all of a sudden, were tied up as the birdie for Heimburg was one of six-straight. His seventh birdie on the ninth gave him a blistering 7-under as well as the outright-lead. After a rollaway from McBeth on the 12th, that lead was two strokes but McBeth didn't shy away in the least.

The two went step-for-step the rest of the way, including perfect play from both on the Par 5 16th. After nearly identitical drives, Heimburg absolutely pinned it for a tap-in eagle. McBeth, who had to follow to keep hope alive, answered it with a midrange shot over the water for the drop-in 3 as well.

On the 17th, down two, McBeth made a calcuated upshot after Heimburg came in too fast to the green. But that didn't matter. Heimburg dropped in the edge-of-circle birdie over and through a bush from the rough to maintain that two-shot lead  -- a tournament-winning putt, as the DGPT's Jamie Thomas said on the call.

But it's not over until they're all in the basket on 18. Heimburg played a safe shot up off the daunting 18th while McBeth blasted one to the top of the hill. He throw-in for the eagle two that would've tied things up narrowly missed to the left.

Heimburg, using his good drives and putts throughout, went up and down to claim his second DGPT win over the season and grab some momentum heading into back-to-back championship weeknds. He finished with a 12-under 52, one shot ahead of McBeth. Garrett Gurthie surged two spots for a third-place finish.

If Paige Pierce had dominated Jonesboro to this point in her career then it's tough to describe what she did to the Disc Side of Heaven track on Saturday.

A five-time champion of the event, Pierce went on an absolute heater in the third and final round, blasting a bogey-free, 1044-rated, 14-under 52 to grab her sixth Jonesboro Open crown with a 13-shot win.

Pierce finished the weekend with three rounds of four-digit-rated golf.

The scores from the FPO podium were all sizzling. Catrina Allen started five-for-five with birdies and finished at 11-under for the round and 20-under par for the event. Hailey King grabbed another podium finish with a 16-under performance over the three rounds.

But this one was Pierce from the start. She was dominant off the tees, finishing first in C1 and C2 in regulation.

Now the action shifts to Rock Hill, South Carolina and the Winthrop Arena for the USDGC and the Women's National Championship. Both events begin Wednesday.