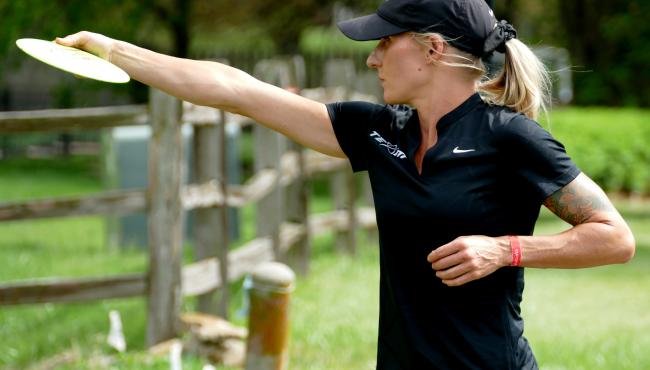 EMPORIA, Kansas — An early weather delay held up the start of the FPO division at the PDGA National Tour - Dynamic Discs Open on Wednesday.

Another round of weather in the afternoon then led to a late finish in Emporia.

Twenty four players had the finishes of their opening rounds delayed until Thursday morning due to darkness, including six of the top eight scores, after a lightning delay derailed the MPO round and another late-afternoon storm forced a second 30-minute halt for the division.

All 24 players, including Catrina Allen with a four-under par score through 13 holes, will resume their round at 8:30 a.m. CT at Jones Gold. Round two tee times for the entire FPO division will be posted after the 15 players complete their first round. The second round in FPO will have the same time block as Wednesday.

Allen was bogey-free through 13 holes, including a circle's edge birdie on the par 4 Hole 10. She snagged a birdie four on the par 5 12th after play resumed. Hailey King sits in second on the lead board at two under with four holes to play.

Kat Mertsch, the reigning PDGA FPO Rookie of the Year, is the clubhouse leader after an even par round of 70. The Arkansas native had five birdies in a six-hole stretch before a double bogey on 18 after play resumed.

Jennifer Allen and Macie Walker are also even par with four holes to play.